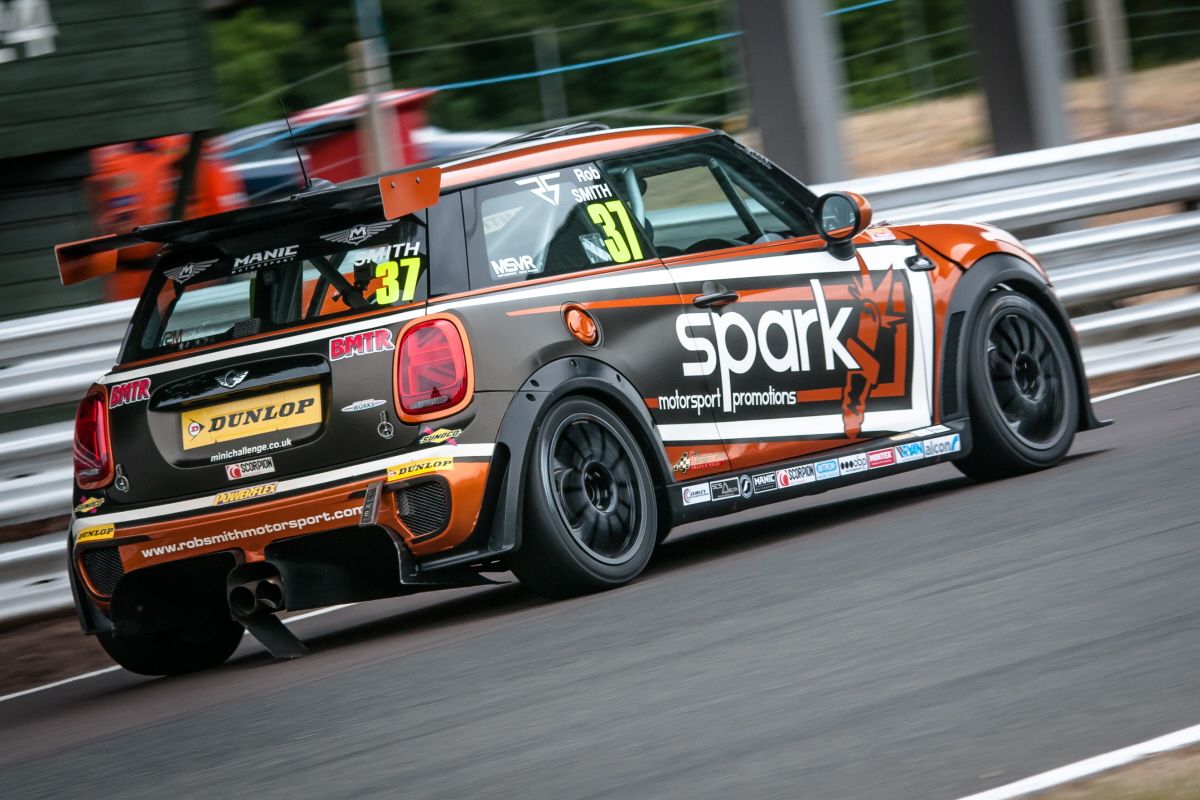 WITH LIGHTS-TO-FLAG DRIVE AT OULTON

Rob Smith boosted his 2018 MINI Challenge campaign on home ground at Oulton Park Island Circuit on Saturday, 21st July, with his second victory of the season during the venue’s annual mid-summer ‘MINI Festival’.

Taking his first pole position of the year and going on to secure his second success in as many outings, having claimed his first win of the year last time out at Silverstone Grand Prix Circuit, the Nantwich driver almost made it two podiums for the weekend with fourth place in race two.

Moving into the provisional series top three as a result, the BMTR Tyre Specialists, CarTyreStore and Spark Motorsport Promotions-backed racer departed Oulton Park delighted with his performance and relishing the first of two visits to Brands Hatch just three weeks from now.

“From the first practice session on Friday we knew we had the pace, I came into the pits and told the team we should park it – the car was perfect”, said MINI UK VIP Customer Team driver Smith, “The balance was mega, the guys in the team had the set-up nailed from the start, so it was just a case of some minor fine tuning.

“For qualifying we knew the time was there, it was obviously fantastic to get our first pole of the year, and in race one I made a fantastic start and built a gap. I think we got caught-out a bit as the track rubbered in and the tyres went off, so I had to manage the gap. After winning the reverse grid race at Silverstone, it’s great to bang it on pole this weekend and take a lights-to-flag win.”

In qualifying for round nine on Saturday morning Smith scorched to his maiden pole position of the 2018 season with a fantastic lap of 1m31.973 seconds (87.12mph) – the only driver to dip below the 1m32 second barrier.

At the start of race one, he produced a textbook launch to lead through Old Hall and by the end of the opening lap his advantage at the front was 0.6 seconds. Although coming under increasing pressure over the next few laps, Smith didn’t put a wheel wrong and set fastest lap pace early on.

Into the second half of the encounter, the series front-runner began to edge away from his rivals and by the start of lap nine he had pulled over a second clear. As the laps counted down, though, Smith’s lead was again reduced and so the 25-year-old focused on controlling the gap to secure the victory.

With the top eight finishers from the first race ‘reversed’ on the grid for round 10, Smith began the day’s second and final encounter from the fourth row and after ending the opening lap in eighth he leapt into the top six on the second tour.

Setting the fastest lap of the race on lap three, a time of 1m32.022 seconds (87.08mph) which remained unbeaten, Smith climbed into fifth position on lap five and moved closer still to the podium on the ninth tour by taking fourth when Jordan Collard retired. Circulating just outside the rostrum placings during the final four laps, he ended the race only 0.9 seconds shy of the podium.

“We showed our pace again in race two, setting a fastest lap half a second quicker than anyone, but as soon as I caught the top three I think I had taken a bit too much out of the tyres so I knew fourth was the best we could do”, Smith reflected, “It’s been a very strong weekend for us at Oulton and now I’m looking forward to Brands next month with the DTM, it’s going to be an amazing event.”

There are just three weeks to wait until the sixth race meeting of the MINI Challenge campaign at Brands Hatch Grand Prix Circuit on 11th/12th August. Joining the support package for the visiting DTM touring car series, the race meeting is set to be the biggest by far of the 2018 MINI season.