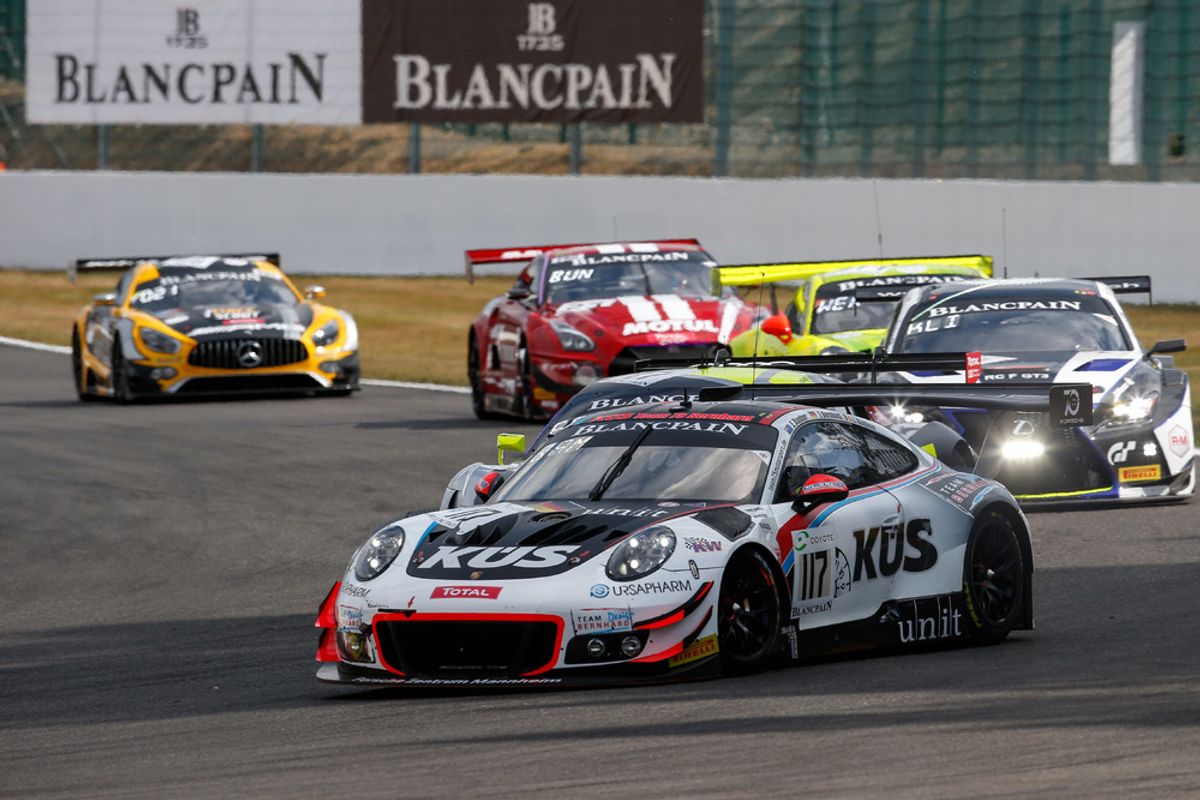 Porsche 911 GT3 R on podium course over a long stretch

Over a long stretch of the 24 Hours of Spa, the best Porsche 911 GT3 R was on a clear course for a podium result. However, a repeatedly lapped vehicle failed to see the #117 nine-eleven fielded by KÜS Team75 Bernhard and brought an abrupt end to the strong performance of the drivers Earl Bamber (New Zealand), Timo Bernhard (Germany) and Laurens Vanthoor (Belgium) with five hours and 38 minutes to the flag. The Porsche 911 GT3 R run by the Manthey-Racing team with the starting number 911 was hampered by electrical problems while running promisingly during the night. The crew of Romain Dumas (France), Frédéric Makowiecki (France) and Dirk Werner (Germany) were unable to make up lost ground after the necessary repairs and concluded the endurance classic on 29th place.

After a strong performance during the night, Black Swan Racing had joined the frontrunners of the Pro-Am category. With their Porsche 911 GT3 R (#540), Tim Pappas (USA), Marc Miller (USA), Jeroen Bleekemolen (Netherlands) and Marc Lieb (Germany) were heading for a podium spot at the 24-hour marathon in Spa-Francorchamps only to have several minor damages throw the team down the field again. Shortly before the end of the race, Marc Lieb had to ultimately park the vehicle in the pits. In the Am-category, the Porsche 911 GT3 R fielded by Herberth Motorsport was one of the fastest vehicles. A driveshaft defect, however, robbed them of all hopes for a victory. Jürgen Häring, Edward-Lewis Brauner, Wolfgang Triller and Alfred Renauer concluded the Ardennes marathon in their #991 customer sports racer sixth in the Am-class.

A total of 221 drivers and 63 vehicles tackled this year’s 24 Hours of Spa-Francorchamps. Thirteen manufacturers were represented at the 70th edition of the Ardennes marathon, which is regarded as the largest and most important GT3 event in the world.

Dr Frank-Steffen Walliser (Vice President Motorsport and GT Cars): “This was an extremely difficult race weekend for us. Our strategy to drive consistently and without mistakes worked well with the Team75 Bernhard squad. Then the car was knocked out of contention by another vehicle. The #911 Porsche GT3 R was several laps down due to alternator damage and lost all chances of bringing home a top result. And the vehicles in the Pro-Am and Am categories also experienced technical problems. So it just wasn’t our weekend.”

Sebastian Golz (Project Manager 911 GT3 R): “Our teams managed to stay out of any tricky situations over the entire race and were very focussed and controlled. The Manthey team was unfortunately affected by an electrical problem and took up the chase again after a 15-minute repair time. The KÜS Team75 Bernhard performed very well and was able to work its way up the field. Everyone stuck to our zero mistake plan, because this is the only way to win at Spa. Unfortunately, the #117 GT3 R was damaged while lapping a slower car and couldn’t be repaired. Once again we saw just how incredibly tough it is at Spa. But we’re looking to the future and we’ll be back in full force next year.”

Earl Bamber (Porsche 911 GT3 R #117): “We had a great car and everyone did a fantastic job. The strategy was spot-on and we would have finished at least in the top five, probably even on the podium. It’s a pity that we were sidelined by a competitor who thought he was fighting for the world championship, although he was many laps behind.”

Timo Bernhard (Porsche 911 GT3 R #117): “We made the decision not to go out again, as the repairs had taken so long. This coming weekend we have the ADAC GT Masters races on the Nürburgring and this series is our main focus this season. The car has to be back on its wheels in time. I feel very sorry for the crew, they all fought so hard. I’m very proud of the team, we were up against the big guys at the front. It makes me sad when you see the emotion in the pits. Still, it makes us stronger. We’ll be back.”

Laurens Vanthoor (Porsche 911 GT3 R #117): “I keep wondering what I could have done differently. The Audi driver was 15 laps down and I’d already passed him in that particular corner. He stayed on the outside, we were side-by-side and I gave him room. Suddenly he turned in as if I wasn’t there, he hit my front wheel and spun. The Bentley came from behind and hit my car with full force. It’s incredibly annoying because we were looking promising in the race and on our way to the top.”

Frédéric Makowiecki (Porsche 911 GT3 R #911): “In the first six hours of the race we were running in the top ten and were fighting hard. Then we had problems with the electrical system and fell far behind. Finally, the underbody of the car was also damaged while driving over debris from an accident. Had we not been handicapped by these problems a podium finish would have been possible.”

Romain Dumas (Porsche 911 GT3 R #911): “We’d expected a better result. The level of competition at Spa is high, so you shouldn’t have any problems when you want to drive at the front. Unfortunately we were hampered by several problems and had no chance for a top spot. We’ll try again next year.”

Dirk Werner (Porsche 911 GT3 R #911): “It was a difficult race. After sustaining damages, we could no longer play a major role in the action and instead just had to turn our laps. We’d hoped for a lot more, but you can’t plan everything in motor racing. We now have to tick this race off and look ahead. I enjoyed driving here at Spa and the team did a great job.”

Marc Lieb (Porsche 911 GT3 R #540): “We drove a superb race in the first twelve hours and were running second in the Pro-Am class. Afterwards, though, we were hampered repeatedly by small defects and repairs. Finally we got a puncture. We don’t know how this happened, but for safety reasons we pulled out of the race, which is a great shame. Black Swan Racing from the USA worked brilliantly and unfortunately was not rewarded for this great effort.”

Alfred Renauer (Porsche 911 GT3 R #991): “The weekend here at Spa went really well, and we were particularly strong in the qualifying. Unfortunately we had a driveshaft defect after five hours of racing and that cost us about an hour in the pits. That was very annoying, because the whole team worked flawlessly before and after this problem. Without this long stop for repairs we would have been amongst the frontrunners.”

This is the Intercontinental GT Challenge
The Intercontinental GT Challenge is the first global racing series with GT3 vehicles as the top class. It was founded in 2016 by the SRO Motorsports Group led by Stéphane Ratel. Rather than compete with a factory squad, Porsche supports international customer teams in their campaign with the 911 GT3 R by providing works drivers and engineers from Weissach. For each race, a maximum of four vehicles selected by the manufacturer are entitled to earn points. Of these, the two best-placed vehicles at the end of the race are awarded points for the manufacturer’s overall classification. In the driver’s category, however, the drivers of all cars nominated by manufacturers are eligible for points.

The Blancpain GT Series Endurance Cup
The Blancpain GT Series Endurance Cup, also run by the SRO Motorsports Group, is reserved for race cars that comply with FIA GT3 regulations. Storied racetracks, cost-effective conditions of participation and equality in terms of technology thanks to the Balance of Performance form the framework of this customer-oriented championship. The season highlight of the championship, the 24 Hours of Spa, is run alongside the Intercontinental GT Challenge. In the series contested all over Europe, there are overall classifications for teams and drivers.