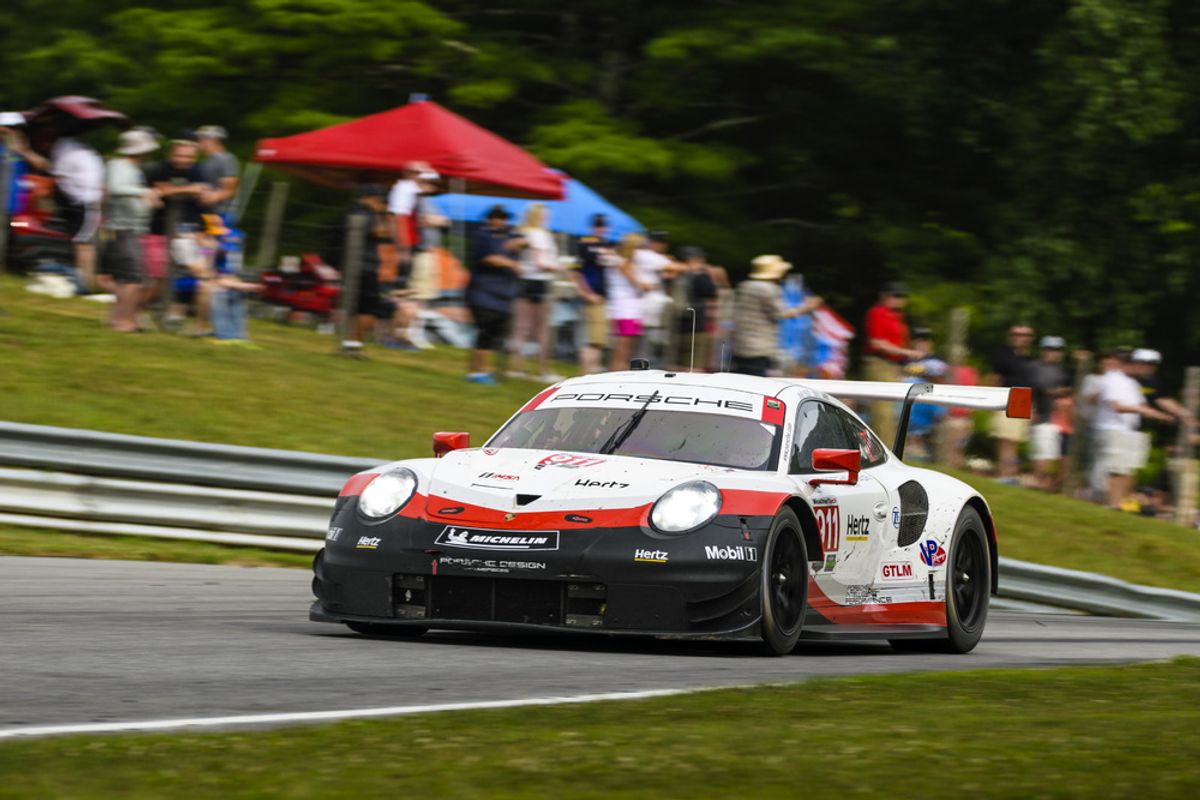 With the Road America race on 5 August, the IMSA SportsCar Championship takes a short trip into the past. The storied 6.515-kilometre circuit close to Elkhart Lake in the US state of Wisconsin is regarded as the birthplace of American sports car racing. The Porsche GT Team fields two 911 RSR in the GTLM class against strong opposition from BMW, Ford and Chevrolet. In its second season, the 510 hp 911 RSR has won two races so far in North America’s premier sports car race series: the 12 Hours of Sebring and at Mid-Ohio. In the GTD class, Porsche’s customer teams Wright Motorsports and Park Place Motorsports compete with the 911 GT3 R.

The race
Road America, which was opened in 1955, is the longest circuit on the IMSA SportsCar Championship calendar and is one of the few courses to have retained its original layout. Sports fans regard the storied racetrack, on which Porsche celebrated a double GTLM class victory in 2015, as “America’s National Park of Speed”. They make their way to Elkhart Lake from all corners of the country. The historic course is two hours by car north of Chicago on Highway 67.

The Porsche drivers
The cockpit of the #911 Porsche 911 RSR is shared by the 2015 Road America winners, Patrick Pilet (France) and Nick Tandy (Great Britain). This season, the pair won the 12 Hours of Sebring. The winners of the Mid-Ohio race, Laurens Vanthoor (Belgium) and Earl Bamber (New Zealand), who recently climbed the podium in third at Lime Rock, share driving duties in the second 911 RSR (#912). In the GTD class, the Porsche customer team Wright Motorsports competes with the 911 GT3 R. In the cockpit of the #58 car are the works driver Patrick Long (USA) and Porsche Selected Driver Christina Nielsen (Denmark). Park Place Motorsports (#73) tackles the race with factory driver Jörg Bergmeister (Germany) and Patrick Lindsey (USA).

The Porsche vehicles
For the second race season, the 911 RSR was optimised primarily in the setup. Depending on the size of the restrictor, the motor, which is positioned in front of the rear axle, puts out around 375 kW (510 hp). The particularly large rear diffuser combined with a top-mounted rear wing provides strong downforce and aerodynamic efficiency. The ca. 368kW (500 hp) 911 GT3 R was designed for worldwide GT3 series. The vehicle is campaigned by customer teams, for whom Porsche has provided an evo-kit in 2018.

Comments before the race
Dr Frank-Steffen Walliser, Vice President Motorsport and GT Cars: “We have a hectic July with three very tough races in the USA and Canada behind us. Despite the enormous stresses on drivers and the team, our 911 RSR gave a strong overall performance, which unfortunately hasn’t been rewarded with a victory yet. After scoring podium results at Watkins Glen and Lime Rock as well as pole position in Bowmanville, we’re now facing the next big challenge with the race on the legendary Road America. It’s a real classic on one of America’s most beautiful racetracks. After our last victory here in 2015, we definitely want to win again.”

Pascal Zurlinden, Director GT Factory Motorsport: “Road America is a traditional closed circuit with a lot of fast corners and loads of character. Teams and drivers face a difficult task with the setup of our 911 RSR. They have to find a perfect compromise to ensure they have the necessary grip for the slow corners. We’re looking forward to this challenge.”

Sebastian Golz, Project Manager 911 GT3 R: “We’re curious to see if our customer teams perform as strongly as in previous years at Road America. Spectators can reach almost every part of this track and get the chance to witness firsthand how the GT cars push the limits of traction in the corners. It’s a great experience for every sports car fan.”

Patrick Pilet (911 RSR #911): “Road America is my favourite racetrack in the USA. I like its tradition and character. For me, it’s America’s equivalent to Spa. The course is fast, demanding and hilly, with a beautiful landscape as the backdrop. Racing there is always very intense. This was underlined in 2015 when we started from the last grid spot and went on to win.”

Nick Tandy (911 RSR #911): “This championship thrives on its contrasts, which makes it incredibly varied and interesting. Recently we raced on the shortest track of the calendar at Lime Rock, now we’re competing on the longest. This requires a totally different and considerably more complex race strategy, also in terms of possible safety car phases. The fact that we’ve already won at Road America gives us an additional boost.”

Laurens Vanthoor (911 RSR #912): “Road America is a real drivers’ racetrack. If you dare to hold off a bit longer before braking for the corners, you can easily overtake in some places. I like such challenges. Races there are always hotly contested. We scored second in 2017 and missed out on victory by just six-tenths of a second. We definitely want to win this time.”

Earl Bamber (911 RSR #912): “I’m looking forward to Road America. It’s my favourite racetrack in the USA. I like that the course is fast and challenging and also set in a beautiful location. Porsche has always done well on this storied circuit. We made up some ground in the championship with our podium result at Lime Rock. Now we have to keep it up if we aim to continue the fight for the title.”

Patrick Long (911 GT3 R #58): “At Lime Rock we took off from pole position for the first time this season with our 911 GT3 R. Although this great grid position didn’t translate into a top result in the race, it makes us very confident for Road America.”