Haslam and Brookes share the Thruxton spoils in Superbike showstoppers 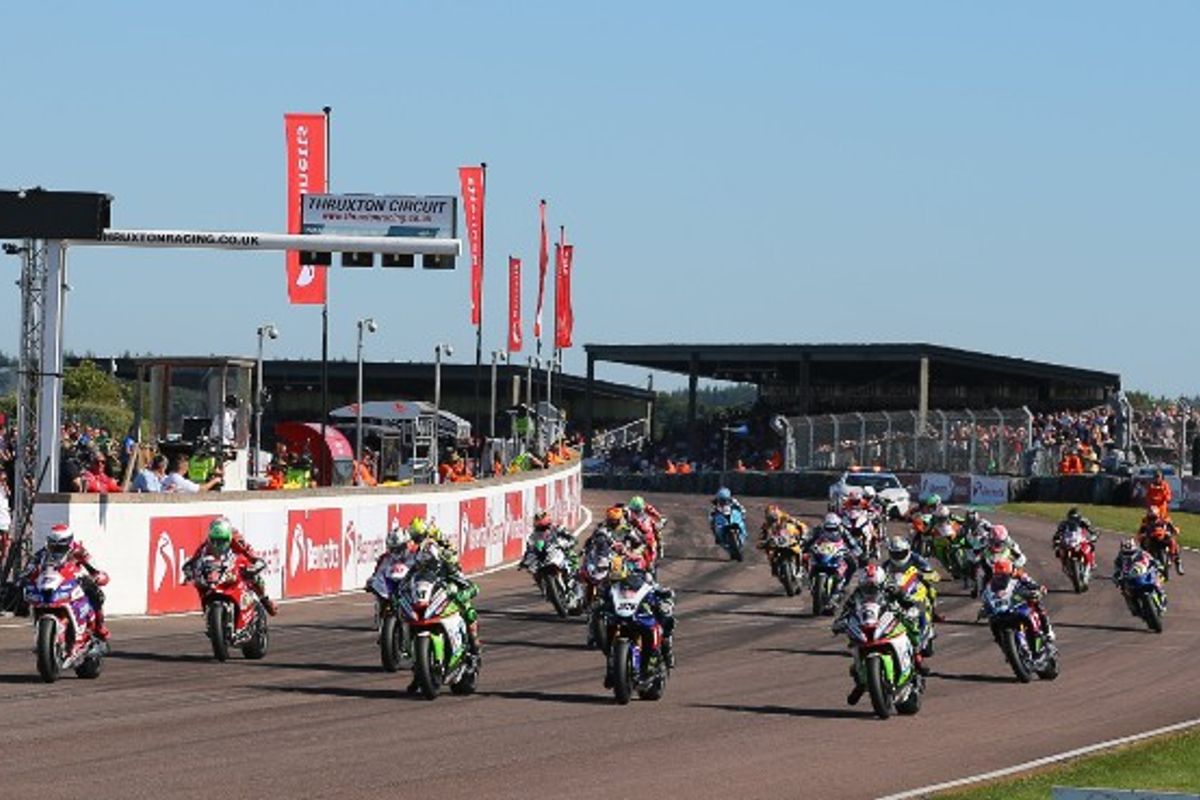 Enthusiastic spectators turned out in force to enjoy a sensational seventh round of the 2018 Bennetts British Superbike Championship at Thruxton Circuit as epic track action fuelled a high-octane day of tremendous two-wheeled racing.

With the vast numbers packing the grandstands and banking being treated to a veritable visual and acoustic feast as the nation’s premier motorcycle masters gave no inch in several breathtaking battles, Thruxton affirmed its reputation for riveting racing with two dazzling Superbike races around the UK’s fastest circuit.

Leon Haslam and Josh Brookes were the day’s top trophy winners, the pair strengthening their title aspirations with sublime performances in race one and two respectively.

While victory for Haslam is the first of his illustrious career to be achieved at Thruxton, Brookes’ success in race two is his eighth around the ‘Hampshire speedbowl’ to bring the charismatic Australian level with Shane ‘Shakey’ Byrne at the top of the circuit’s all-time winners’ list.

In race one, JG Speedfit Kawasaki’s Luke Mossey led initially off the line from second position, but after building up a sizeable advantage he’d be reeled in by the chasing pack as the fight for victory swelled to seven evenly-matched riders over the second-half.

With the iconic heavy-braking Club chicane – positioned at the end of the full throttle slipstream-inviting back straight – setting the stage for many of the race’s awe-inspiring overtakes, the leading order changed with nearly every lap as the riders ducked and dived for position.

This was especially true of the leaders as Jake Dixon on the RAF Regular and Reserves Kawasaki and Leon Haslam riding for the Bournemouth-based JG Speedfit Kawasaki team tussled all the way to the wire, the latter pulling off a decisive pass on the final lap to snatch his seventh victory of the season.

“It is always tough coming here,” a delighted Haslam enthused. “The JG Speedfit boys have done a mega job this weekend. It wasn’t easy from row three but the battle with Jake was fantastic. You’re always trying to play a game of chess and hopefully at the end you come out on top, which we did. I have always struggled here so to get my first win here is fantastic.”

The biggest cheer of the day, however, was to be saved for the man in third position as a gutsy ride from Peter Hickman saw him dig deep to go from hospital bed to podium in little more than two hours. The Smiths Racing BMW rider was admitted to Royal Hampshire County Hospital overnight and placed on an IV after being diagnosed with a kidney infection but after missing warm-up he was back on his BMW S1000RR in time for race one.

Despite the physical nature of Thruxton, Hickman steadily worked his way into contention from 11th on the grid to get involved in the lead group during the latter stages before pouncing for third on the final corner when Brookes and Honda’s Jason O’Halloran came to blows. With their clash demoting one another to fourth and sixth respectively, pole sitter Glenn Irwin also scythed between them for fifth.

A race of attrition for many of the front-runners, title showdown contenders Bradley Ray, Danny Buchan and Michael Laverty came down together at the Club chicane, while Andrew Irwin – who qualified on the front row alongside his brother Glenn – also failed to reach the chequered flag.

With the race two grid determined by the fastest laps from the first race, Mossey held P1 at a standstill but it was Dixon who snatched the hole-shot into the opening turns to assume a lead he’d retain for six of the encounter’s 20 laps.

However, after missing the podium in race one, a determined Brookes began to make his presence felt as he picked his way past his rivals culminating in him moving to the front on lap seven at Club. From here he wouldn’t be caught, the McAMS Yamaha rider producing an imperious ride to affirm his status as a ’Master of Thruxton'.

“It has actually been a difficult weekend for us, we normally expect to race well here,” he said. “We played our cards wrong in race one but we had a stronger package in race two and I am thrilled we at McAMS Yamaha can celebrate another victory, it is so important to score these points with the title at stake.”

Behind Brookes, Hickman starred once more with an adrenaline-fuelled ride to second position, in turn collecting a large haul of points and earning immense admiration from both spectators and his fellow riders.

“On Saturday I woke up feeling really bad,” he explained. “I went to bed straight after qualifying, next thing I know the paramedics are round because I was in and out of consciousness. I was taken to hospital in an ambulance and I was there until midday today. I was not 100% but I have been on an IV last night and this morning and I felt OK. I was just happy to make the podium. It was the weekend we needed apart from the ill bit!”

Dixon notched up a second podium of the weekend in third place, heading off the threat of Haslam who was forced to settle for fourth place this time. Tarran Mackenzie completed the top five from O’Halloran.

While Superbikes wrote the headlines, a packed itinerary of racing on the support programme nonetheless allowed a cavalcade of two-wheeled talent to enjoy their moment in the spotlight over the day, with the Dickies British Supersport Championship, Pirelli National Superstock 1000 and 600 Championships, HEL Performance British Motostar and the Hyundai Construction Equipment British Sidecars with Molson ensuring the action came thick and fast for fans.

Beyond the captivating competition on course, audiences attending Thruxton took the opportunity to savour the many family-friendly activities and exhibitions on offer across the venue. The BMW Bahnstormer pop-up showroom lured visitors with its display of Baron von Grumble’s HP4 race Superbike alongside a stunning Smokin’ Customers R 100 R along with Bahnstormer’s R Nine T Track, while the numerous merchandise stands and the ever-popular paddock access and pit-walk autograph sessions ensured day-long entertainment.