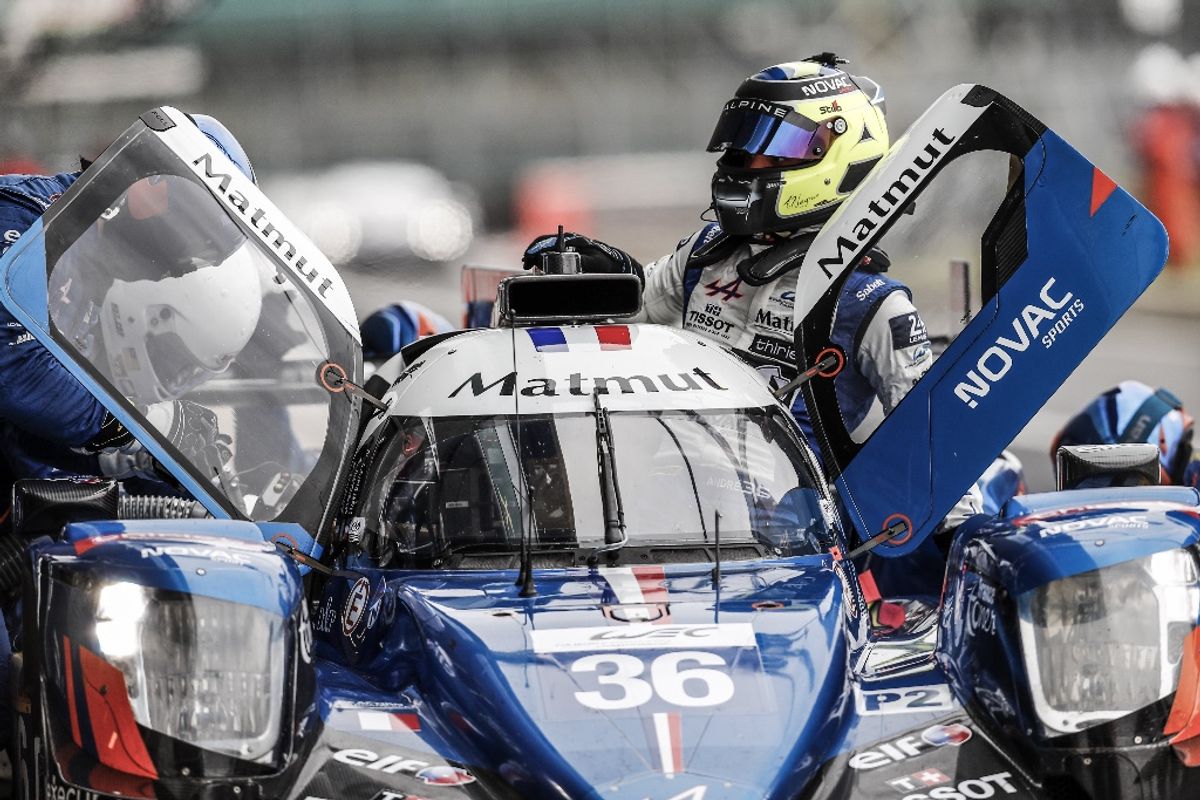 Signatech Alpine Matmut finishes the 6 Hours of Silverstone (Great Britain), round three of the FIA World Endurance Championship on the third step of the podium.
Despite balance issues and a stop-and-go penalty, Nicolas Lapierre, André Negrão and Pierre Thiriet claimed the team’s best-ever result at Silverstone.
The team will take on the 6 Hours of Fuji (October 12-14) with the lead in the FIA LMP2 Endurance Trophy.

Contested under covered skies, the three free-practice sessions allowed the Signatech Alpine Matmut team to get comfortable once again with the Alpine A470’s ‘sprint’ package, as well as the new Silverstone track surface.

Qualifying duties were shared by Nicolas Lapierre and Pierre Thiriet. While the former posted the third best time in LMP2, his team mate’s run was interrupted by a red flag and his only real flying lap didn’t allow him to improve the position of the n°36.

Back up to third following the penalty handed to the n°38 Jackie Chan DC Racing entry, Nicolas Lapierre had to cope with oversteer and couldn't fend off the charging Ho Pin Tung.

Signatech Alpine Matmut thus decided to change strategy ahead of the stints of Pierre Thiriet and André Negrão. While the French driver couldn’t match the speed of Mathieu Vaxivière, his team mate got the better of the n°29 Racing Team Nederland.

Gradually, the two drivers moved the team back into contention, but Pierre Thiriet fell victim to a misunderstanding in coming in too early during the safety car period to hand over to André Negrão at the mid-way point of the race.

While waiting for the penalty to come, the Brazilian driver held off the return of the n°31 DragonSpeed. Nicolas Lapierre made the most of his double-stint to widen the gap. The penalty finally came 90 minutes before the finish. The Alpine A470 was given a 75 second stop and go penalty.

Alone in third place after his unexpected trip to the pits, Nicolas Lapierre left André Negrão to complete his double-stint in the final hour of the race. In total control, the Brazilian sealed the third consecutive podium for the n°36 Alpine A470 in taking the chequered flag in third position.

“This maiden podium at Silverstone concludes a weekend in which we learned a lot. We were down on top speed and had a front end problem on Nicolas’ first stint. It is always difficult to readjust the set ups once the race starts, so we changed our tyre strategy. This let us get back into the race before this misunderstanding within the team during the safety car period. Pierre was not at all to blame for this penalty. We made a mistake, even though we could pose a few questions as five other cars did the same mistake. Despite the race incidents, we never gave up and we were better late in the race and got the best result we could. We knew it would be hard to win because the two cars ahead of us were racing on their home track, but we are thrilled to end the European season with a third consecutive podium.”

“It was a very hard race. We had a problem with the first set of tyres and after that we were a bit off the pace. Some small errors cost us a lot, but we battled hard to limit the damage and complete our objective. We now need to understand what didn’t work in order to come back stronger in Japan and I have no doubt that with hindsight and the team’s experience we will be able to do it.”

“This podium was achieved through a lot of effort! Nico suffered early in the race and we lost almost two laps, which is a huge gap and always very difficult to make up! Nevertheless, we never gave up and we continued to push hard to get this third place. This result keeps us in the lead of our category and this is reward for all the work the team put in. It is now important for us to look ahead to Japan!”

“I think we can be satisfied with this result as this podium was anything but a given. We didn’t have the speed to compete for the win, but André and Nico put in solid stints in spite of an oversteering car in the high-speed corners. I also did my best in trying to be as consistent as possible without making a mistake. I also want to congratulate the team for all the work it did over the weekend and I am sure that our work will see us quickly gain the pure speed we were missing this weekend.”