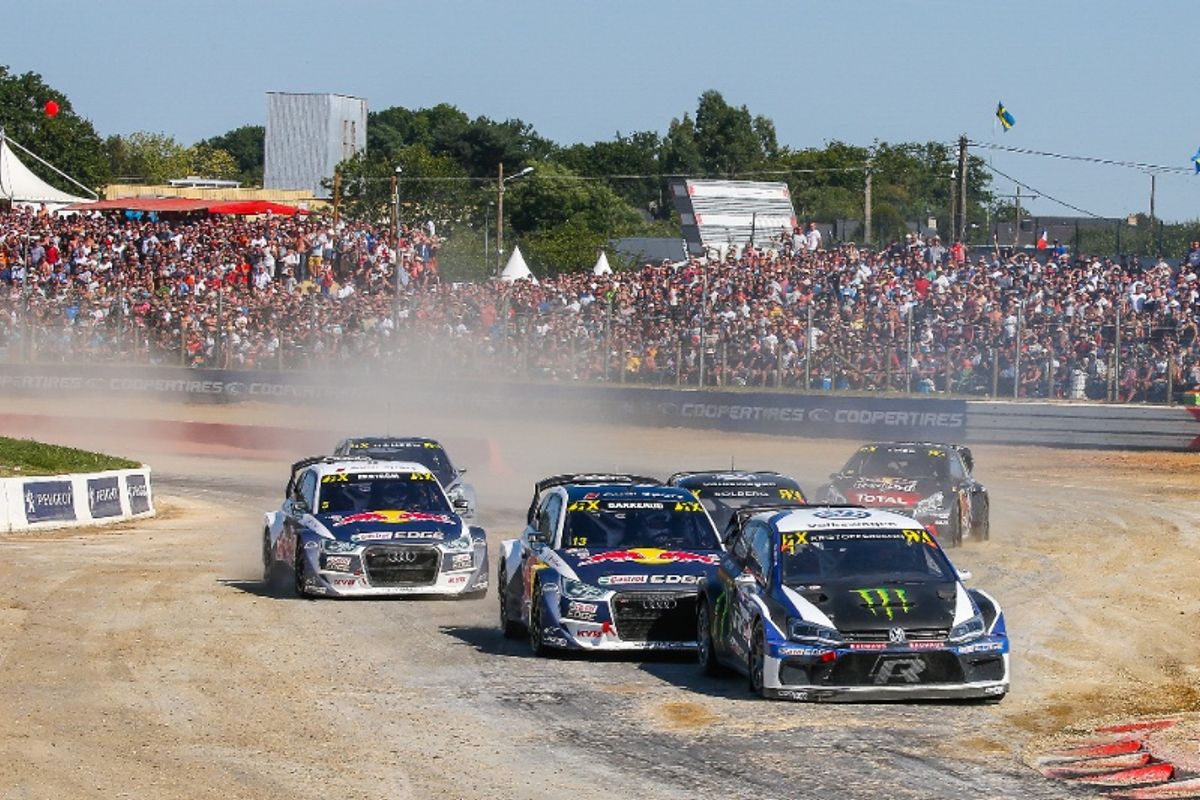 A packed crowd at the World RX of France, round eight of the FIA World Rallycross Championship presented by Monster Energy witnesses an action-filled weekend where PSRX Volkswagen Sweden’s Johan Kristoffersson scored victory.

It was a double-podium for the PSRX Volkswagen Sweden team as Kristoffersson took his joker in on the second lap of the final and seized the lead in the closing stages to claim victory in his Volkswagen Polo R. He was joined on the podium by Norway’s Petter Solberg in third.

EKS Audi Sport’s Andreas Bakkerud started the final on pole position and claimed the Monster Energy Super Charge Award for having the fastest reaction time at the start in his Audi S1.

The Norwegian and Mattias Ekstrom shared the front row for EKS after both drivers won the two semi-finals, Bakkerud then taking the lead and heading his team mate until the pair took their jokers on lap six and re-joined the standard lap second and fourth.

“It was a really tough weekend. We were hoping to have made some progress before the weekend on a high grip track which Loheac is. We had a good tyre strategy but unfortunately I lost the start in the semi-final against Mattias (Ekstrom),” explained Kristoffersson. “Until then it was really tough during the whole weekend. I stalled in Q2 and had to fight from the back, and had a great fight with Liam (Doran) in Q1. Only Q4 was really a clean run for me. In the final I knew I had really good tyres, I took the joker in the right moment and from there on it was very tricky to know when Timmy (Hansen) was going to joker. I knew it was going to be very, very tight (with leader Bakkerud). I really pushed everything in turn five on the last lap and it was just enough to come in front of Andreas (Bakkerud). I’m really happy to have Petter on the podium as well, this is really for the team, they have been working very hard.”

Bakkerud crossed the finish line 0.34 seconds behind Kristoffersson. “I’m disappointed about us having missed a one-two result by such a narrow margin, but am taking a lot of positives home from France,” said Bakkerud. “We had good results in the preliminary races, managed to win our semi-finals and now I’m in second place of the drivers’ standings.”

Solberg was delighted with a double-podium for PSRX Volkswagen Sweden. “I’m very pleased, I think for the viewers and spectators there’s been some incredible fights here and nothing really crazy at all. It’s the most proper driving I’ve seen for a long time,” commented Solberg. “It’s been a little bit of a tough weekend but we came to the final, tried to be neat and clean. I had good speed after I took the joker, it was very close with Johan out of the joker. We were pushing on, both of us, and at the end of the day Bakkerud came in between, but I’m very pleased.”

Team Peugeot Total’s Kevin Hansen and Olsbergs MSE’s Kevin Eriksson finished fourth in the semi-finals as both GC Kompetition drivers, France’s Guerlain Chicherit and Great Britain’s Liam Doran made the semi-finals and finished fifth and sixth. Both GRX Taneco drivers, Finland’s Niclas Gronholm and Russia’s Timur Timerzyanov also made the top 12 and finished sixth and fifth in semi-final’s one and two respectively.

The fourth round of the FIA European Rallycross Championship for Supercar joined World RX at Loheac and was won by France’s Cyril Raymond, much to the delight of the French crowd. Hungary’s Krisztian Szabo was second on his debut in an EKS Audi S1 Supercar and 2017 Euro RX Supercar Champion Anton Marklund was third. The Championship will be decided at the next round in Riga, Latvia.

Russia’s Aydar Nuriev won the FIA European Rallycross Championship for Super1600 final ahead of Hungary’s Gergely Marton and Latvia’s Artis Baumanis. Rokas Baciuska set the quickest time in each of the fourth qualifiers and won semi-final one to start the final from pole position, but retired almost as soon as the race got underway.

Paul Bellamy, World RX Managing Director for IMG, concluded: “The French rallycross fans are some of the most enthusiastic in the world and their admiration of their home drivers is amazing. The cheers when Sebastien Loeb was fighting his way through the semi-final to make it into the final was incredible. Congratulations to EKS Audi Sport for filling the front row of the final and to Johan Kristoffersson and the whole PSRX Volkswagen Sweden team for winning again and extending their Championship leads. We had a fantastic full weekend of action at Loheac and we’re already looking forward to the next round in Riga in just two weeks.”