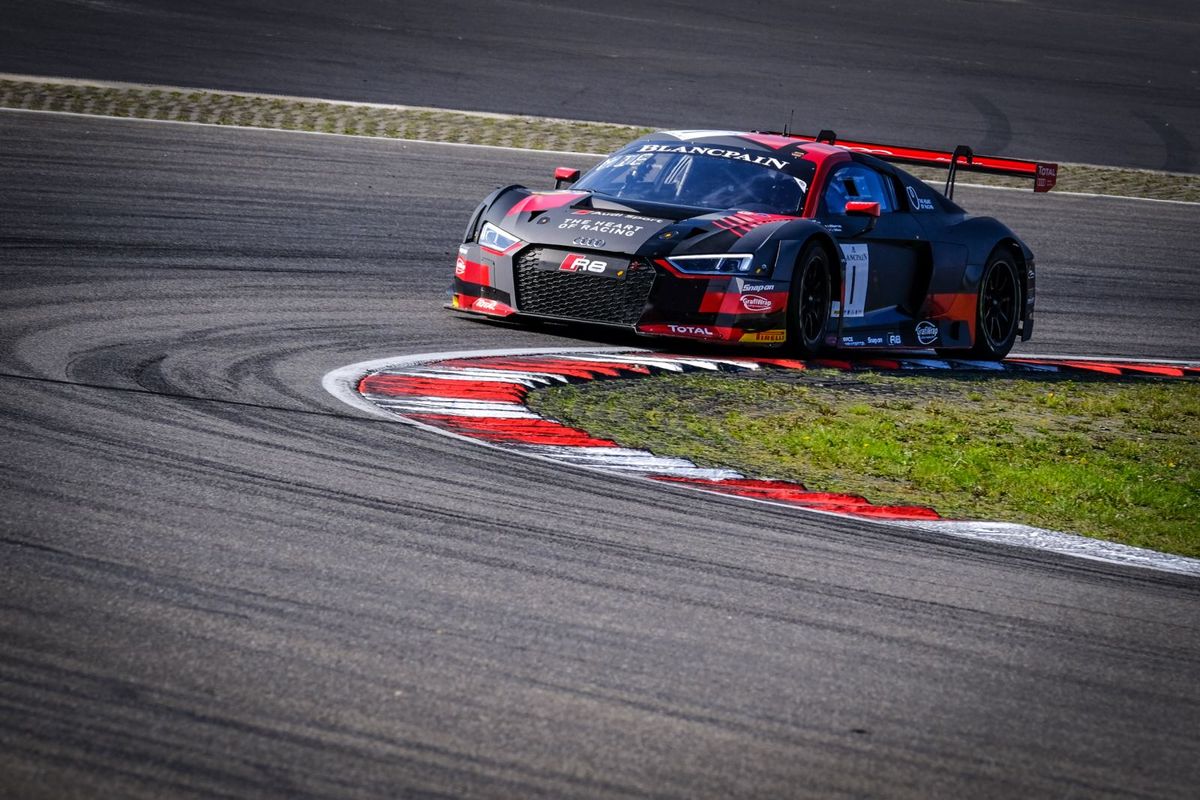 Christopher Mies and Alex Riberas took a significant step towards securing the Blancpain GT Series Sprint Cup drivers’ title with victory in the opening race at the Nürburgring.

The #1 Belgian Audi Club Team WRT entry finished second on the road, but was elevated to top spot after a 30-second time penalty was imposed on the #63 Grasser Racing Lamborghini of Mirko Bortolotti and Christian Engelhart.

Though the #63 Grasser crew led much of the one-hour contest, the #1 Belgian Audi Club Team WRT machine was in close pursuit for the duration and finished within striking distance on the road.

TV footage subsequently showed that Engelhart was wearing his frontal head restraint over the shoulder straps of his harness, a breach of Article 120 of the Blancpain GT Series 2018 Sporting Regulations. As such, a penalty of 30 seconds was added to the #63 car’s race time, dropping it to 13th position.

When the contest got underway Bortolotti led from pole and retained his advantage into the tricky opening turn. Behind him Riberas was able to fight his way past the #14 Emil Frey Racing Lexus of Albert Costa, while Simon Gachet’s hopes were dashed early on as his #25 Sainteloc Racing Audi R8 LMS slid into the gravel.

The three leaders built a small gap at the head of the field, with Bortolotti’s advantage never exceeding two seconds. Behind him the Spanish drivers fought hard for P2, with Costa coming close to making a move but ultimately finding the WRT-Audi R8 LMS impossible to pass.

The race was neutralised before the 15-minute mark after a collision between the Pro-Am leaders: Piti Bhirombhakdi in the #39 TP 12 Kessel Racing Ferrari and Rinat Salikhov’s #333 Rinaldi Racing Ferrari. The #39 machine was out on the spot – a potentially decisive moment for the Pro-Am title battle – while the #333 limped back to the pits and into retirement.

When racing resumed Bortolotti once again led the pack away, but Riberas remained on the rear of the Lamborghini while Costa continued to fill the Audi’s mirrors.

Riberas stopped shortly after the pit window opened, while Bortolotti remained on-track for a further lap. Quick work from the WRT squad and a rapid out-lap from Mies put pressure on the Grasser outfit, but Engelhart emerged just ahead of his fellow countryman.

Mies quickly closed on to the rear of the #63 Lamborghini and was soon within less than one second of the lead. Engelhart did not put a wheel wrong, but the Audi remained within striking distance.

Behind them the order was shuffled as Costa stopped late to hand the #14 Lexus over to Christian Klien, who left the pits just ahead of Andrea Caldarelli (#19 Grasser Racing Lamborghini) and Dries Vanthoor (#2 Belgian Audi Club Team WRT). The Lamborghini driver made his way past almost immediately, while Vanthoor was also able to move up a spot at Klien’s expense.

This set up the most entertaining battle of the second stint, with Vanthoor closing on to the rear of Caldarelli and applying significant pressure to the Italian driver. It looked like being in vain, but as the race approached the final 10 minutes the WRT-Audi dived up the inside of the Lamborghini at turn one. Caldarelli closed the door and there was contact, but Vanthoor was able to hold the position and both cars continued without visible damage.

At the front of the pack Engelhart edged away slowly, eventually establishing a three-second advantage over Mies. The #63 Grasser-Lamborghini held on, only for Engelhart’s rules breach to result in a penalty.

Mies crossed the line second, unaware that his efforts would ultimately be rewarded with victory. This was a remarkable result following a qualifying accident this morning, which left Mies shaken and required significant repair work from the WRT crew. What’s more, it was enough to establish Mies and Riberas as the clear championship leaders ahead of tomorrow’s deciding race.

Vanthoor took what would soon become second spot, ahead of Caldarelli in third. Fifth on the road, and fourth following the Grasser penalty, belonged to Raffaele Marciello in the #88 AKKA ASP Team Mercedes-AMG. The Italian ace was impressive during the second half of the race, taking the car from Michael Meadows in P11 before scything through the field.

The points he scored could prove crucial, as the #88 car will start tomorrow’s race from second position and is now the #1 WRT-Audi’s only challenger for the title. The championship standings see Mies and Riberas on 90.5 points, with Marciello and Meadows close behind on 81.5.

The Silver Cup title had been decided before today’s race, with Nico Bastian and Jack Manchester (#90 AKKA ASP Team Mercedes-AMG) confirmed as Sprint Cup champions last time out in Hungary.

Bastian completed the opening stint in the class lead, which Manchester held after taking over the car. The British driver was able to run with the overall contenders, only for an on-track incident to force him into the pits and out of the running.

The #6 Black Falcon Mercedes-AMG was next to take the class lead and eventually won the race on the road, but Luca Stolz was later penalised 30 seconds for taking both hands off the wheel in the fast lane when exiting the pits. As such, the #3 Belgian Audi Club Team WRT crew of Adrien De Leener and Ricardo Feller secured Silver Cup honours.

In Pro-Am, the events of today’s race could prove decisive to the outcome of the title battle. The #26 Sainteloc Racing Audi R8 LMS sealed the win, which, coupled with the #39 Ferrari’s retirement, places Nyls Stievenart and Markus Winkelhock in a strong position to take the class title tomorrow.

Sunday will see the season-concluding Sprint Cup race get underway at 16.00 CEST at the Nürburgring, with the #1 WRT-Audi and the #88 AKKA-Mercedes vying for the overall title. Judging by the events of the weekend so far, the battle will go down to the final lap.