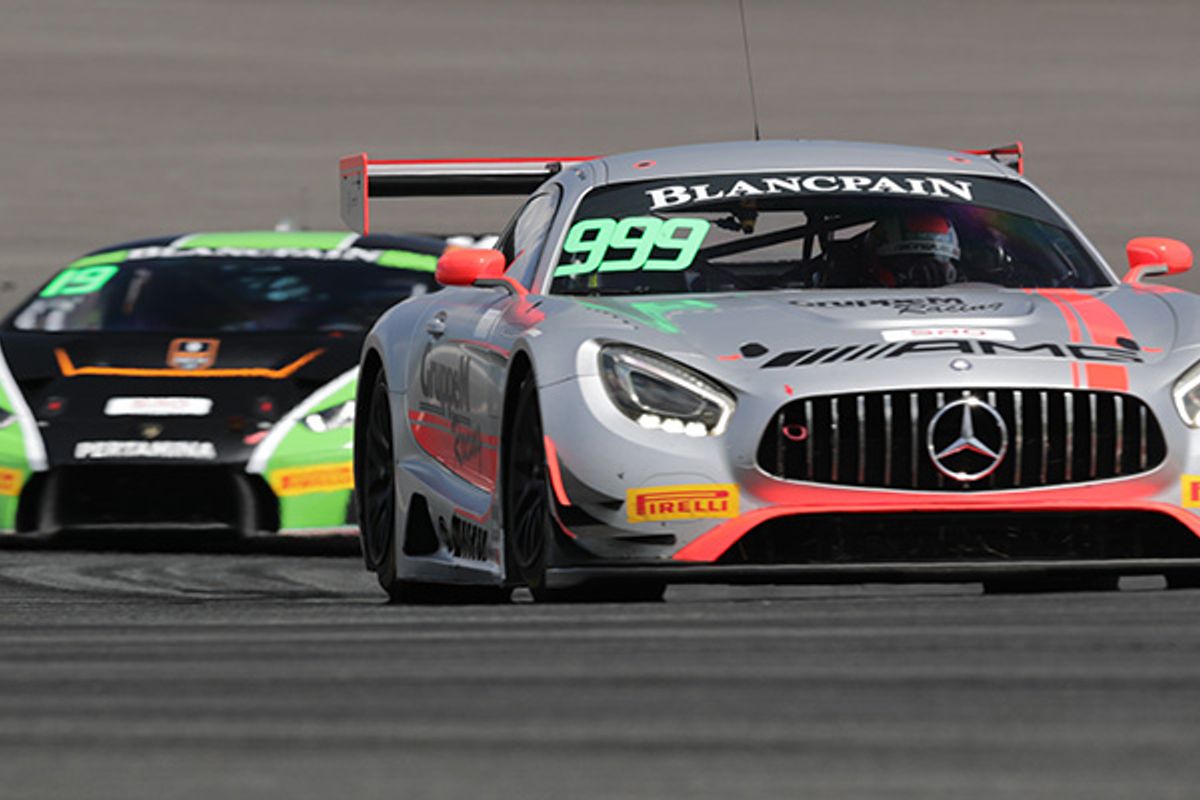 Shanghai hosts the penultimate round of the 2018 Blancpain GT Series Asia campaign this weekend when 32 supercars, which include several high-profile debutants in both classes, descend on China’s grand prix venue where a total of 50 points are once again on offer across two 60-minute races.

GT3: FIVE MANUFACTURERS IN THE TOP-FIVE

A third victory of the season last time out at Fuji helped GruppeM Racing’s Patric Niederhauser re-take GT3’s overall championship lead from Martin Kodric and Dennis Lind who head into Saturday’s first race eight points behind the Swiss. However, the #19 FFF Racing Lamborghini has the distinct advantage of competing handicap-free against its Mercedes-AMG rival which must serve the full 15s pitstop success penalty for winning in Japan.

HubAuto Corsa’s Nick Foster remains the fastest driver yet to win in 2018, a statistic he’ll likely have to change this weekend in order to remain a title candidate at Ningbo’s season finale. The Ferrari driver is third in the standings but 28 points behind Niederhauser with 100 still up for grabs over the remaining four races.

Next up in the overall standings are three crews also battling for Pro/Am supremacy. Yuke Taniguchi’s standout performance on home soil at Fuji landed the Japanese amateur and his KCMG co-driver Alexandre Imperatori an outright victory, which also helped to establish a 15-point Pro/Am advantage over compatriot Hiroshi Hamaguchi and Marco Mapelli. The #63 FFF Racing Lamborghini is also hamstrung by a 10s pitstop success penalty after finishing Fuji’s second race in third.

Meanwhile, newly-crowned Blancpain GT Series Sprint Cup champion Raffaele Marciello now heads to Shanghai in search of another Pro/Am victory alongside GruppeM co-driver Alexander Mattschull. The Italian is 16 points behind Taniguchi but, just like his fellow FFF Racing rivals, will spend additional time in the pits for finishing second overall in Japan last time out.

But of all the championships on offer, it’s the Am Cup that looks most likely to be decided this weekend. KCMG duo Naoto Takeda and Takuya Shirasaka are 63 points ahead of Andrew Macpherson and Ben Porter who must reduce their deficit to less than 50 if they’re to prevent the Japanese pair from winning the crown with a race to spare.

Elsewhere, Phoenix Racing Asia will make their first appearance as a Bentley partner team when both 2018-spec Continental GT3s hit the track for the first time at Shanghai. Alex Yoong and Marchy Lee are reunited in the team’s #5 car while Shaun Thong is joined by factory driver and series debutant Jordan Pepper in #6.

Anstone Racing, whose cars are overseen by Chinese squad Tianshi Racing Team, make their series debut with a pair of Mercedes-AMGs driven by David Chen/Max Wiser and Naoki Yokomizo/Wei Xu, plus Shanghai sees the return of Bhurit Bhirombhakdi and Jingzu Sun who share Singha Plan B Audi’s R8 LMS GT3.

But the local squad most likely to spring a surprise on debut could be JRM Porsche Official Team whose driver pairing of Li Chao and Chris Van de Drift were China GT runners-up last season and lie second in the domestic standings again this year. That position was reinforced with a double podium at Shanghai earlier this month aboard their 991 GT3 R, which is entered in the Pro/Am class this weekend.

Fuji proved a tough weekend for long-time championship leader Reinhold Renger who saw a sizeable lead cut to 25 points – the same as a victory – by Team iRace.Win’s Ringo Chong and Gilles Vannelet. However, the big winners were once again BMW Team Studie, and in particular Takayuki Kinoshita and Sunako Jukuchou, who won both races to move 29 points behind GruppeM’s front-running Mercedes-AMG.

Renger will benefit from former GT3 racer Rick Yoon joining him this weekend in Shanghai as well as both Team Studie M4s serving success penalties in Race 1. Ending the weekend 51 points ahead of his rivals will be enough to see Renger crowned champion before Ningbo’s season finale.

Another entry not eligible to score points is the Craft-Bamboo Racing Mercedes-AMG, which features Diana Rosario and James Tang for the first time.

However, Chong will continue to score points towards his Drivers’ title tilt despite having a new co-driver aboard iRace.Win’s Mercedes-AMG this weekend. And in Alex Au he couldn’t have a more capable pair of hands given the Hong Kong driver’s performance at Shanghai in 2017 when he recorded two overall GT3 podiums and double Pro/Am victory.

Watch Blancpain GT Series Asia qualifying and both races live from Shanghai on the championship’s Facebook page and website this Saturday and Sunday.