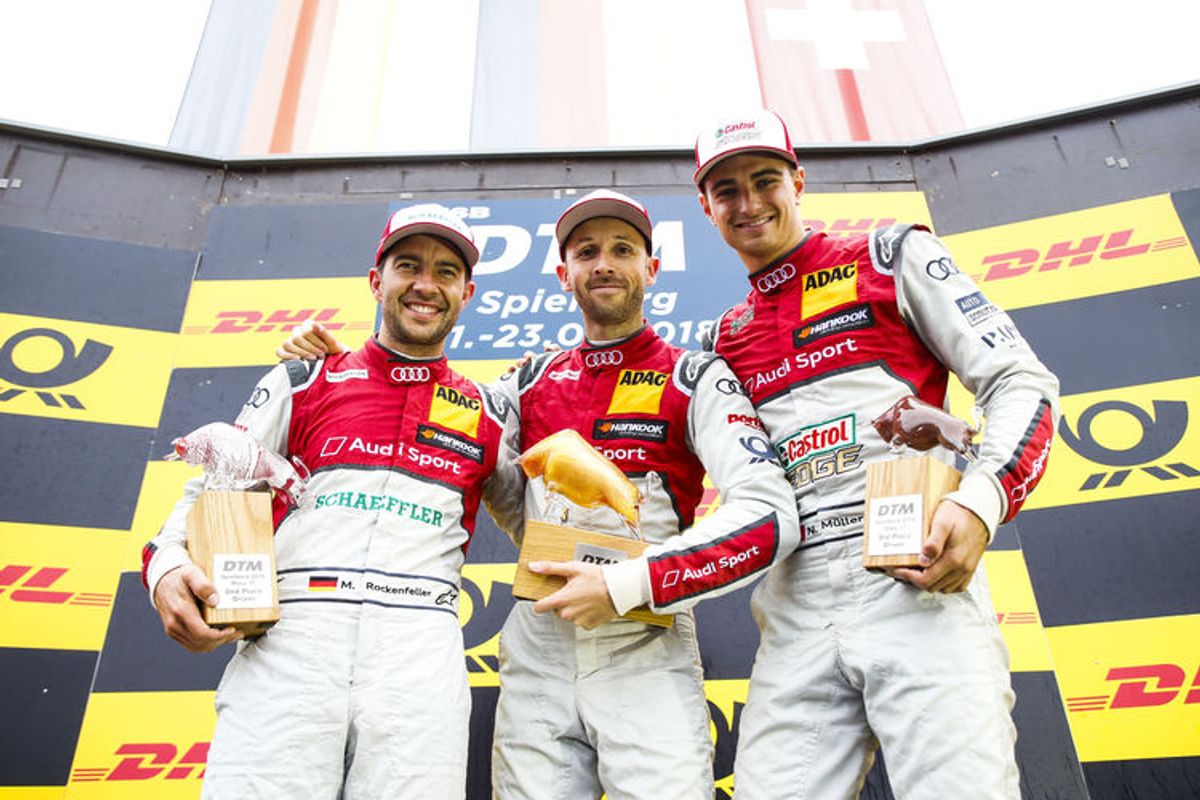 What a spectacle! Rain in qualifying, a track that was still partly wet in the race and two safety car periods were the ingredients that made the 17th round of the 2018 DTM season an all-time classic. Up until shortly before the race ended, Daniel Juncadella (Mercedes-Benz) looked like the sure winner. About halfway through the race the Spaniard had overtaken Mike Rockenfeller, who had been leading for a long time, and had an advantage of a little less than two seconds over the Audi driver when BMW driver Timo Glock caused a safety car period. During the IndyCar restart Juncadella violated the rules, which handed the Audi drivers behind him an unexpected opportunity that René Rast, Mike Rockenfeller and Nico Müller turned into their advantage in nothing flat.

While Juncadella on the last lap was handed a drive-through penalty, Rockenfeller and Müller yielded to Rast in the last turn. “Obviously, you’d like to win yourself,” Rockenfeller said after the turbulent final phase. “But René is our only chance in the title race. That’s why, at this stage of the championship, it was clear that we’d help him. We managed that well today.”

“Winning from ninth on the grid does not happen very often,” Rast said after scoring his seventh DTM success in total. “It was an incredibly tough race and Mike (Rockenfeller) and Nico (Müller) would have deserved victory and second place, respectively. But in view of my chance to continue to keep the championship undecided and thrilling it was of course fantastic that they helped me.”

The fact that Rast at the restart three laps before the end overtook the BMW of Marco Wittmann, who had previously cost him a lot of time and several positions, played a crucial part in this. It put him in the position of being able to accept the help from his brand colleagues.

Rast’s teammate, Jamie Green, scored his best result of the season to date: The Briton advanced from 15th on the grid to position five. Robin Frijns in eleventh place just barely missed scoring a point even though he had been hit by a rival as early as on the starting lap and dropped to last place. Loïc Duval was not able to avoid his spinning brand colleague and was forced to retire as a result of the collision.

“That was an incredible race with an incredible outcome for us,” said Head of Audi Motorsport Dieter Gass. “After qualifying, we hadn’t expected a one-two-three result, nor finishing with four cars in the top five. Today, simply everything played into our hands and we didn’t mind accepting the gifts from our competitors. We made