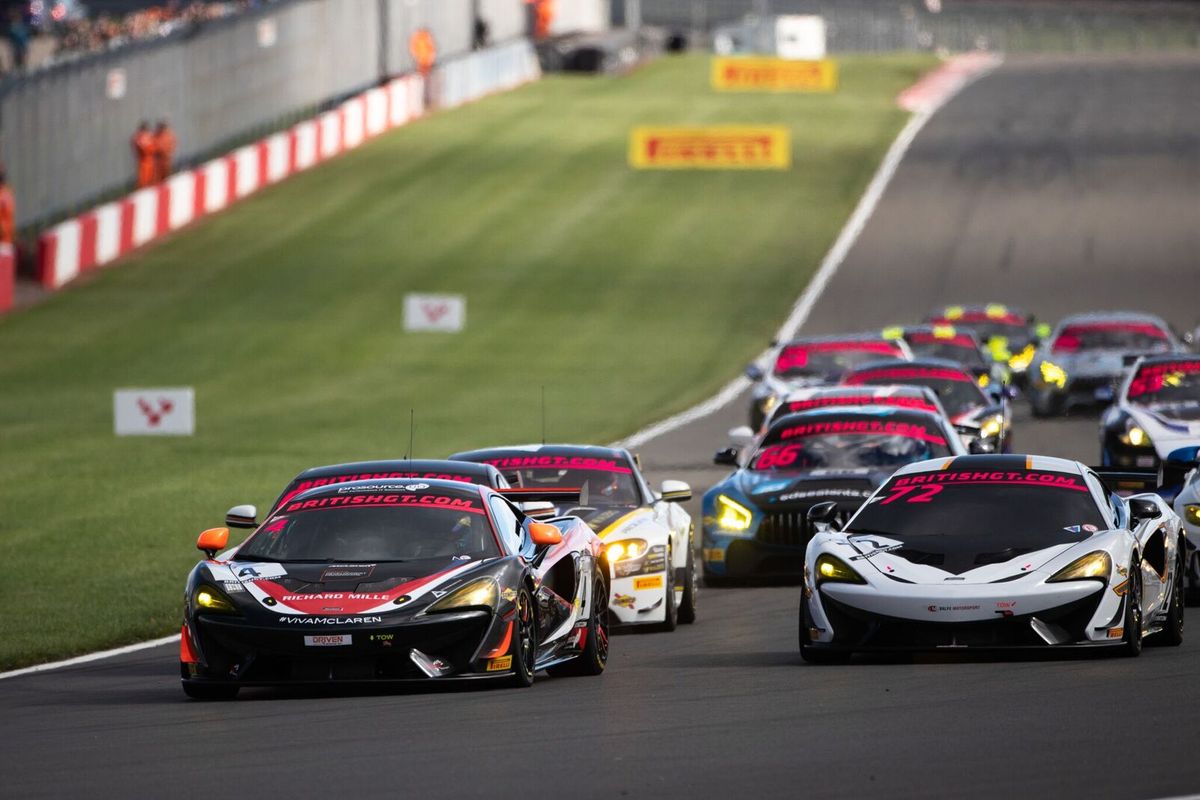 The McLaren 570S GT4 scored a memorable 1-2-3 finish in the two-hour British GT Championship season finale at Donington Park, with customer teams Equipe Verschuur and Tolman Motorsport finishing with cars on the podium.

For the final qualifying of the 2018 season, the 570S GT4 showed strong pace, with three examples in the top five grid slots. The Equipe Verschuur driving duo of Finlay Hutchison and Daniel McKay proved the quickest McLaren over the one lap sprint, lining up second on the grid.

From second on the grid, the #10 570S GT4 of Equipe Verschuur went on to win the hotly-contested GT4 class outright on Sunday, with what turned into a dominant performance in the second half of the race.

A strong start saw McKay take the lead within three laps. The car fell to fourth in the class on lap 14 though, after McKay had a trip through the gravel at Redgate. An incident, however, elsewhere on track saw the McLaren 570S safety car deployed, neutralising the race, allowing the team to regroup.

When the race went green, McKay pushed hard immediately, taking third and then moved up to second by lap 25. Five laps later, McKay made a pass for the lead at the Melbourne Hairpin just before the round of pit stops.

When Hutchison took over to start the second stint and emerged from the pits in the lead, he proceeded to build the gap to the chasing pack. Taking the chequered flag, the Dutch team finished 21 seconds ahead of second place; the first of the Tolman Motorsport 570S GT4s. The result marks the first win for customer team Equipe Verschuur, in its debut British GT season.

The #4 Tolman 570S GT4 of Charlie Fagg and Michael O’Brien came home second. O’Brien started the race, and defended third place in the opening laps while maintaining the gap to the lead pair which allowed him to secure second place just prior to the Safety Car period.

After the pitstop, Fagg took over, and re-joined in second place. A well-managed drive in the closing stages saw the young Brit retain position as he crossed the line to secure the podium. The result sealed third in the GT4 Drivers’ and runner up in the Silver Cup championships for O’Brien and Fagg in their debut British GT season.

The #56 Tolman Motorsport entry of Factory Driver Joe Osborne and David Pattison, meanwhile, finished third after a far more action-packed race. Pattison was behind the wheel for the start, and moved from 13th to as high as eighth before the Safety Car.

A well-managed strategy saw the Pro-Am entry re-emerge from the pitlane in fifth overall with Osborne at the wheel, second class. From here, Osborne set about chasing down the lead group, consistently setting laps faster than those in front of him, and made up two places before the end, snatching the final place on the podium and the GT4 Pro-Am lead with just a few minutes remaining in the race.

With a double podium finish, Tolman Motorsport came achingly close to winning the GT4 Teams’ title, finishing second by just a point and a half.

“Huge congratulations to our customer teams and drivers for the results achieved at the British GT Championship season finale at Donington Park. Once again, the 570S GT4 showed its potential over a one-lap sprint and in the race environment, with strong qualifying results and a hard-earned podium lockout.

“This season of British GT has provided action-packed and exciting racing all year, and it was great to see the title fights going down to the final round. The results are a great way to end the year, adding further silverware to the already impressive collection achieved by the 570S GT4, only in its second competitive season with customer teams.

“The championship has also been an ideal proving ground for drivers, and provided a great platform for the inaugural season for the McLaren Automotive Driver Development Programme. All four drivers have delivered results, both on-and off-track, and conducted themselves well as they build a strong foundation in GT racing. Michael O’Brien and Charlie Fagg have, in particular, done extremely well to secure second in the Silver Cup championship, and third overall for the season, against a very competitive grid, and they should be proud of what they’ve achieved this season.