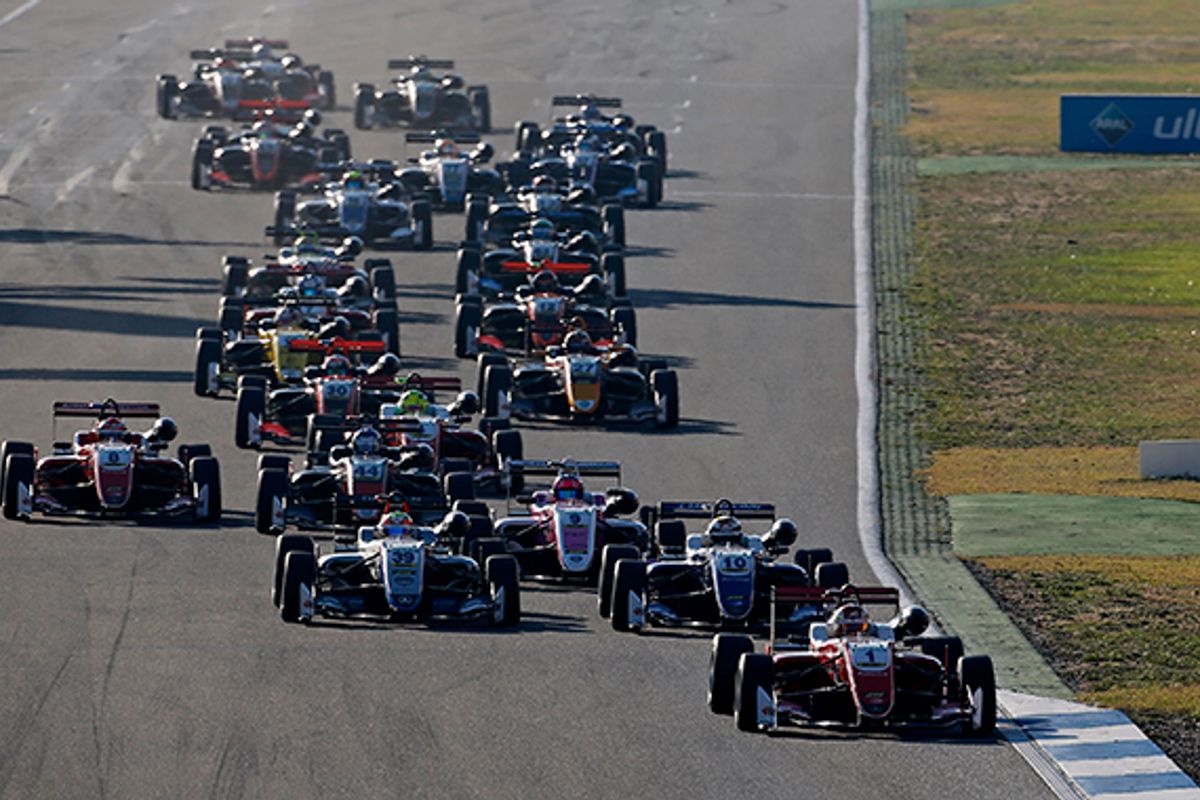 Guanyu Zhou was able to benefit from his pole position and took the lead at the start. Jehan Daruvala (Carlin) slotted into third place behind Robert Shvartzman, but the Indian retired after contact with Alex Palou (Hitech Bullfrog GP) on the opening lap already. A few metres later, Mick Schumacher and Marcus Armstrong tangled and were both forced to make a pit stop. While Armstrong retired later on, Schumacher started his way back up and eventually came home in twelfth place.

Further up to the front, Zhou also remained in the lead after a pair of safety car interventions. These two neutralisations followed after Daruvala’s retirement on the opening lap and an accident involving Ferdinand Habsburg (Carlin) and Fabio Scherer (Motopark) on lap six. Zhou remained unfazed and scored his second victory of the FIA Formula 3 European Championship season. Second across the line was Robert Shvartzman, who successfully managed to defend his position from a charging Jüri Vips on the final lap. Behind fourth-placed Palou, Daniel Ticktum finished fifth from Ralf Aron (PREMA Theodore Racing), Sacha Fenestraz (Carlin), Nikita Troitckii (Carlin), Enaam Ahmed (Hitech Bullfrog GP) and Frederik Vesti (Van Amersfoort Racing). The Dane finished in the top ten in his first participation in the FIA Formula 3 European Championship.

Guanyu Zhou (PREMA Theodore Racing): “Having claimed pole position, my goal was to win the race as well. At the start, I managed to take the lead and the restarts were okay, too. My car was really fast and I was lucky that the drivers behind me were battling with each other. Then, I tried to save my car and my tyres as much as I could. I am very happy with my second win in the FIA Formula 3 European Championship, even though it has been a long time since I won the first race of the season at Pau.”

Robert Shvartzman (PREMA Theodore Racing): “First of all, I am happy with having sealed the rookie title already. Winning titles is always nice. In the race, I was already able to overtake Alex Palou and Jehan Daruvala on the opening lap when the two tangled. Then I was second and stayed there until the end. At the end, I had some problems with lack of grip from my tyres and I made a few mistakes as a result. Jüri was able to close up and we had a nice battle that was fair and enjoyable.”

Jüri Vips (Motopark): “Third place is a good result. As Alex Palou and Jehan Daruvala collided, I moved up into third place. Towards the end, I reckon I had slightly less problems with the tyres than Robert, so that I was able to close up. My attack was more like a desperate move, but I just had to do it in order to keep the battle for the rookie title open. Unfortunately, it wasn’t to be.”