Fourth WEC podium in a row for Signatech Alpine Matmut 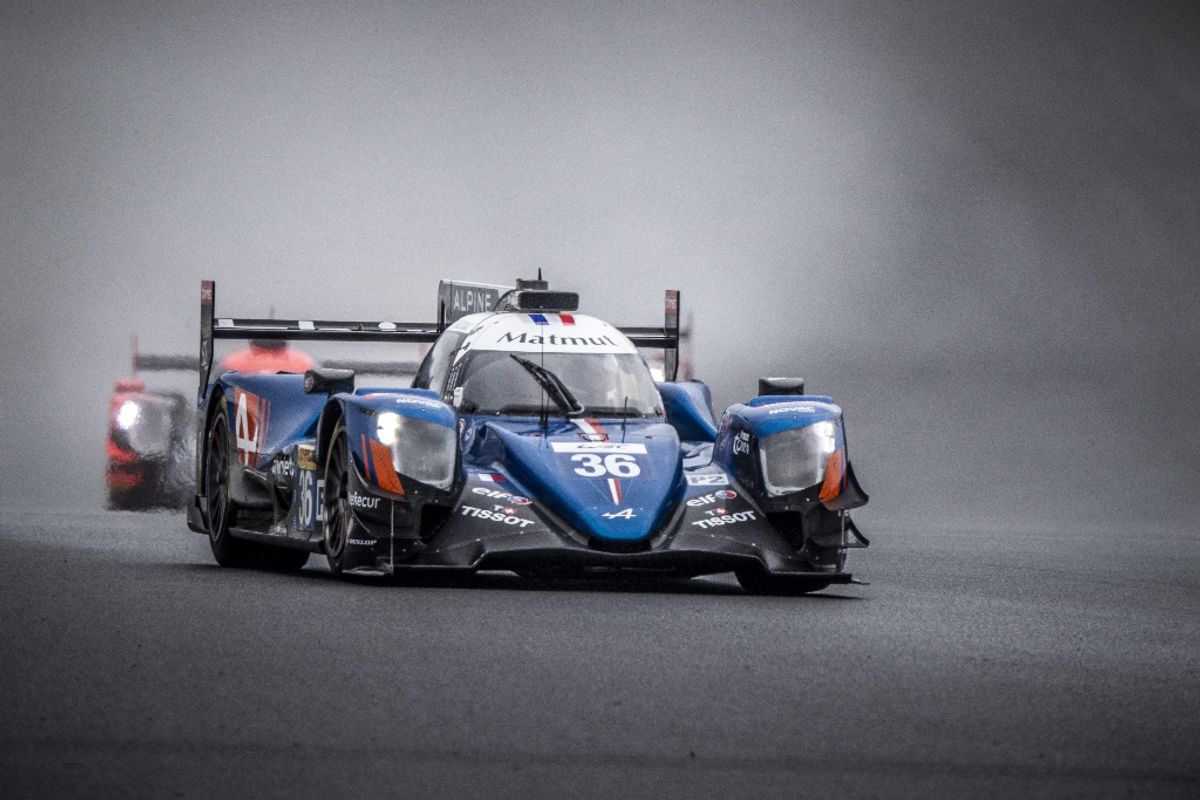 With the third place finish of Nicolas Lapierre, André Negrão and Pierre Thiriet, Signatech Alpine Matmut finishes on the podium for the fourth consecutive time at Fuji Speedway in Japan.
With four podiums in as many races this season the Alpine A470 maintains its lead in the World Endurance Championship LMP2 category before the Shanghai round on November 16-18.
This weekend, Signatech Alpine Matmut received its 24 Hours of Le Mans winner’s trophy.

There was a rather unique ceremony on Friday. 10 days after being officially and definitively declared the winners of their category in edition 86 of the 24 Hours of Le Mans, Signatech Alpine Matmut and its drivers received their trophy from ACO President, Pierre Fillon.

On the track, the cloudy skies remained clement for the first two free-practice sessions. Despite frequent interruptions due to the loose yellow kerbs, the team worked flat out and finished with the best time in session two.

Following the final session where priority was given to tyre strategy, qualifying was confided to André Negrão and Pierre Thiriet. The session was extremely competitive with the duo placing the Alpine A470 fourth in LMP2.

On Sunday, the race began on a wet track. In these difficult conditions, Nicolas Lapierre got off to a perfect start to move up to second place before taking the lead in the opening half hour of the race. The circuit began to dry but still remained rather slippery. After a restart, Nicolas Lapierre was caught out by the continually changing track conditions and dropped five positions at the end of the hour one.

The team reacted immediately by switching to slick tyres for the end of his triple stint. Just before half distance, the n°36 Alpine returned to the provisional top three. Pierre Thiriet took over and his two strong stints allowed him to pull away from those behind and close the gap to the n°38 Jackie Chan DC Racing entry.

André Negrão also fulfilled his part of the job during his double stint, running a solid third prior to handing over to Nicolas Lapierre in the final hour. The Brazilian driver was back in the car for the last 30 minutes of the race with Ho-Pin Tung in his sights. While he managed to reduce the gap, he ran out of time and had to settle for third place.

“There is a little disappointment, but there are several positives to remember. Our level of performance has improved since Silverstone. Everyone has gotten better, whether it is the team during the stops, the adjustments and preparation of the car, or the drivers, like Pierre, who had a great race. This allowed us to retake the lead rather quickly and we led three times thanks to the pit stop cycle. Despite an unfortunate race incident due to the conditions, we reacted well in making up a large portion of the minute lost. We still lead the championship and that is most important for staying mobilized and focused. There is still a long way to go in the championship. We have only completed half of it. We must always run up front and that is what we have done since the beginning of the year.”

“This result is a fine way to end the weekend in which the Alpine network and the Japanese customers had the opportunity to test drive the Alpine A110 on the Fuji circuit while also getting the chance to discover Alpine’s racing programme. Although we always aim for the win, this third place finish sees us stay atop the general classification and this is what is most important to recapturing the world title.”

“I have mixed feeling about this result. We clearly had the speed for the win, but we were a little unlucky and my spin on my second stint probably cost us the victory. Thanks to the work of everyone in the team, we had a fast car all weekend and this allowed us to return to the podium. The goal at Shanghai will be to leave there with the championship lead, so we will do what it takes to make that happen!”

“We did a good job. The pace was there throughout the weekend and the set-ups were ideal, no matter the conditions. The victory was within our grasp, but sometimes in motor racing that’s the way it goes. We are still leading the general classification, for sure by just one point, but it’s the position that counts. We will continue our efforts at Shanghai to keep the momentum going just until the end of the Super-Season!”

“Even though the result isn’t what we were hoping for, I prefer to remember the positives and there were many more than the negatives. I am delighted with the pace we had in the race. We have made a lot of progress since Silverstone, which bodes well for the rest of the season. I am sure that we will arrive in Shanghai with a fast car and the motivation to go for the win.”