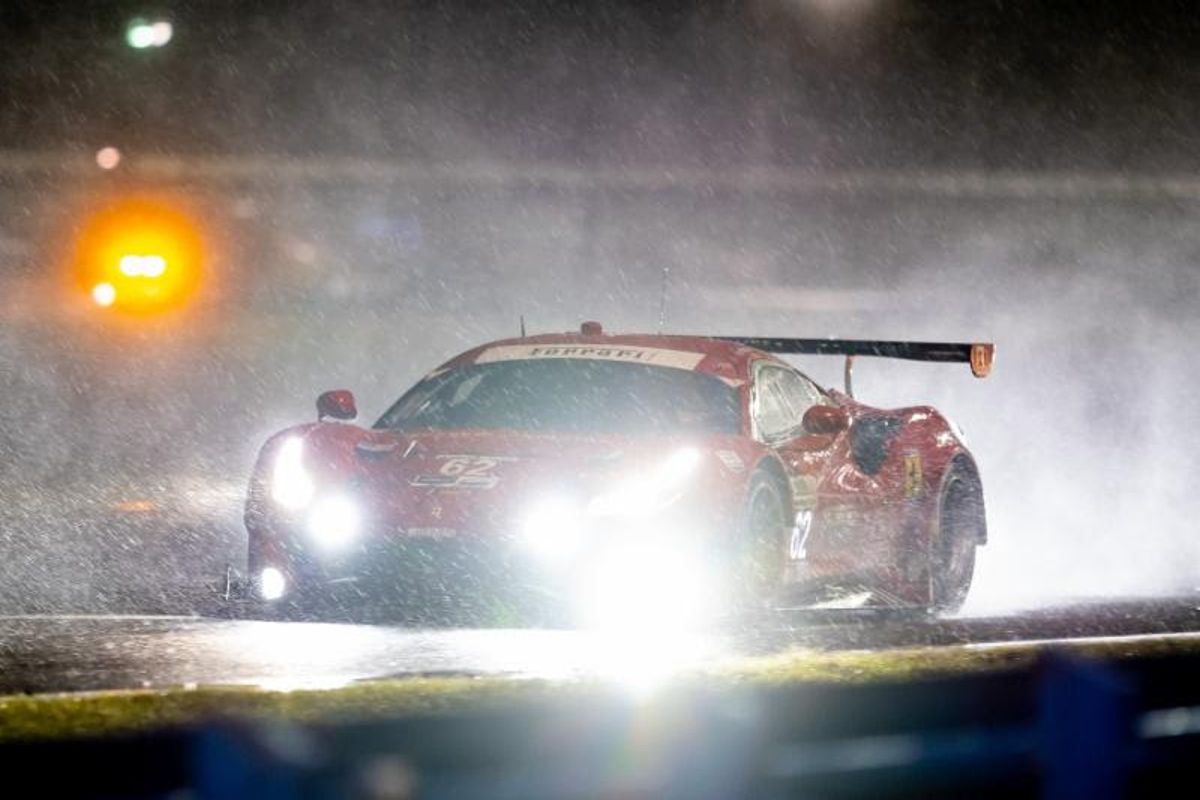 he No. 62 Risi Competizione Ferrari 488 GTLM Team continued to live up to their legend of being one of the premier endurance racing sports car teams in the world. In this year's running of the Rolex 24 At Daytona at Daytona International Speedway, the Houston, Texas-based Ferrari team nearly climbed on the top step in the GTLM class after a grueling and rainy race.

The rather unconventional twice-around-the-clock Daytona enduro featured two lengthy red flagged sessions with a total of over three and a half hours of the 24-hour total stopped. Constant rain was the reason for the IMSA officials' call to cease the race twice, the first at 7:21 a.m., the second at 12:40 p.m., Eastern time. Additionally, there were 17 caution periods for a total of 126 unofficial laps.

Risi drivers James Calado, Alessandro Pier Guidi, Davide Rigon and Miguel Molina were all superstar drivers in the 488 Prancing Horse. They never had a misstep in their driving despite the challenging conditions. Additionally, the popular Risi Competizione team never put a foot wrong in their efforts in the pits and regularly beat the factory teams out under the numerous caution flag stops.

Risi Competizione's last Daytona podium was in 2017 when they finished third in the Ferrari 488 GTLM. Last June Risi Competizione with Keating Motorsports collected a podium (third) at the 24 Hours of Le Mans. Another recent endurance highlight was Risi's victory at Petit le Mans in 2016. The fan favorite team has plenty of additional endurance victories and podiums but the Rolex 24 At Daytona was the one endurance win they had yet to conquer.

The underdog in the factory backed GTLM class, the privateer Ferrari team with a stellar Ferrari GT factory driver line-up, was consistent and strong while the factory teams from Porsche, Corvette, BMW and Ford all suffered accidents or mechanical issues through the challenging race, but were able to come back. The three GTLM podium finishers were all on the same lap and the next three class competitors were just one lap down.

In somewhat of a repeat from the 2017 Daytona race, Brit Calado drove a masterful race in wet conditions and regularly was able to stay on top in class while his competitors suffered issues or fell off the pace.

The Risi Competizione Ferrari team led 176 laps of the 593-lap race and had the red flag that ultimately was the end of the race been thrown just a few laps earlier, the team would have been on the top step today.

QUOTES:
Rick Mayer, Risi Competizione Race Engineer:
"It was an odd, challenging race the way it played out. I'm very happy with the way the drivers and crew performed. They performed flawlessly. The car is nearly unscathed after 24 hours. We made no mistakes in the pits, in strategy or on the track and we deserved a podium finish and, for awhile, I thought we were going to win it. We came in with low expectations because we were lacking quite a bit of power and speed, but rain is an equalizer and at the end I think we actually had a competitive car."

James Calado, driver No. 62 Risi Competizione Ferrari 488 GTLM:
"Obviously, we are disappointed. Naturally you always want to win the Daytona 24 Hours and to finish just a couple of seconds behind is really frustrating. I think considering we had a car that wasn't as fast as the others, we did an amazing job as a team to get P2. We led a lot of the race. It was literally just the fact that too much water came down at the wrong time and the Ferrari couldn't take the standing water on the track. Timing was a bit unlucky. Even so, I'm happy with P2 but certainly wanted the win."

Davide Rigon, starting driver No. 62 Risi Competizione Ferrari 488 GTLM:
"I was really thinking we'd have a victory at one point. Thanks to the entire Risi team, they did a fantastic job. Every pit stop we gained positions. In the rain we had really good pace and James did a fantastic job, as well as Alessandro and Miguel. We really enjoyed this race and are happy, but a victory would have been much better."

Alessandro Pier Guidi, driver No. 62 Risi Competizione Ferrari 488 GTLM:
"Well, we finished the race and are now here with not a good taste in the mouth. I think it's good because at the start no one expected to fight for the win and to finish second and not be happy. It's something we should be proud of, I think. From the start the drivers and the Risi Ferrari team did almost a perfect race, and I say almost, because we were second. To be fair and in hindsight, I don't know what we could have changed to win this race. We maximized everything. We made no mistakes and it was a very tricky race. I am proud to do it for Risi and Ferrari at this Daytona 24 and we will do it again next time."

Miguel Molina, driver No. 62 Risi Competizione Ferrari 488 GTLM:
"Now I'm not feeling so positive because it was really, really close to get the victory, but at the end I think the entire team did a fantastic job. We were there fighting for the victory from, I would say, the third or fourth hour and at the end we finished second, so I think we need to be happy. But at the moment it's a bit painful. We need to be proud of the team. We arrived here with low expectations and really fought hard to achieve what we did. At the end it was not possible, but I think everybody gave 100% to try to get the victory. At the end, second place doesn't taste as good as I would have wanted. We were so close."

The Risi Competizione Ferrari team has not yet announced any further racing plans for 2019 at this time.