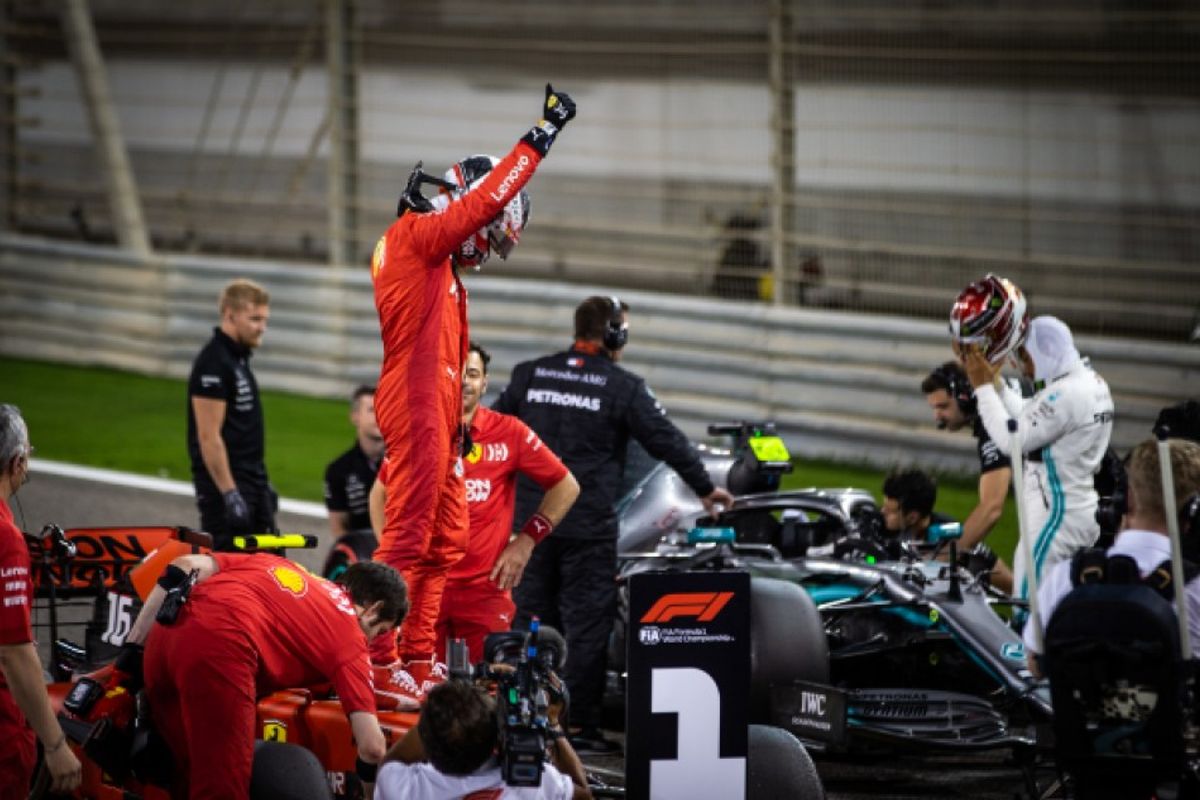 Charles Leclerc took the first pole position of his career, beating Ferrari team-mate Sebastian Vettel by almost three tenths of a second as the Italian squad locked out the front row of the grid for tomorrow’s Bahrain Grand Prix. Defending champion Lewis Hamilton was forced to settle for P3, 0.030 behind Vettel, ahead of Mercedes team-mate Valtteri Bottas.

At the start of the session Ferrari quickly seized control, with Leclerc taking P1 thanks to a lap of 1:28.495. Vettel slotted into P2, 0.238s behind his team-mate, while Valtteri Bottas took third place, a full second adrift of the pacesetting Monegasque. Hamilton’s final Q1 lap of 1:29.262 then moved him to third place In a tight battle, in which P6 to P15 were covered by just half a second, there was no escape at the end of the segment for Alfa’s Antonio Giovinazzi who was the first man eliminated in P16.  The Italian was bounced out ahead of surprise casualty Nico Hulkenberg of Renault, Racing Point’s Lance Stroll and the Williams cars of George Russell and Robert Kubica.

At the top of the table Leclerc’s opening time kept him in P1 ahead of Vettel with Hamilton third ahead of Lando Norris of McLaren who put in a superb lap to split the Mercedes drivers. Toro Rosso’s Alex Albon took sixth ahead of McLaren’s Carlos Sainz, Haas’ Kevin Magnussen and Red Bull’s Max. Romain Grosjean was 10thfor Haas.

Leclerc again led the way in the first runs of Q2, setting a time of 1:28.046. That put him more than four tenths of a second clear of Hamilton, with Bottas in third. Verstappen slotted into fifth place with a lap of 1:29.143, ahead of Vettel who made a mistake in Turn 10 and was forced to run again as the top two stayed in the garage for the final runs. Pierre Gasly in the second Red Bull was in trouble though, down in P12, with a lap of 1:29.526 after the first runs.

And in the final runs the Frenchman couldn’t find the pace to break out of the Q2 drop zone. He failed to improve on his first-run time and was bypassed by Toro Rosso’s Alex Albon who finished behind the first driver eliminated, Renault’s Daniel Ricciardo. Behind Gasly, Racing Point’s Sergio Perez was ruled out in P14 ahead of the second Toro Rosso of Daniil Kvyat. Vettel’s error in Q2 and the need for an extra run meant he was restricted to the garage for the first run in Q3. That left the door open for Leclerc and the Monegasque driver took top spot with a time identical to that with which Vettel claimed pole position in 2018.

The gauntlet was laid down, therefore, and Vettel was the first of the Ferraris on track for the final runs. Despite getting running his team-mate close through S1, the lap went away from the German over the two remaining sectors and he could only claim P2 with a time of 1:28.160. Hamilton edged close to the front row with his final run, but in the end he had to settle for third place, three hundredths of a second behind Vettel.

Leclerc, though, was going even quicker than on his opener and he eventually claimed his maiden pole, and the first in for a driver from Monaco, with a new track record of 1:27.866.  With Bottas fourth ahead of Verstappen, who was also restricted to a single run, Haas’ Kevin Magnussen finished in P6 ahead of McLaren’s Carlos Sainz and the second Haas of Romain Grosjean. Kimi Räikkönen was ninth for Alfa Romeo and the top 10 was rounded out by Norris.