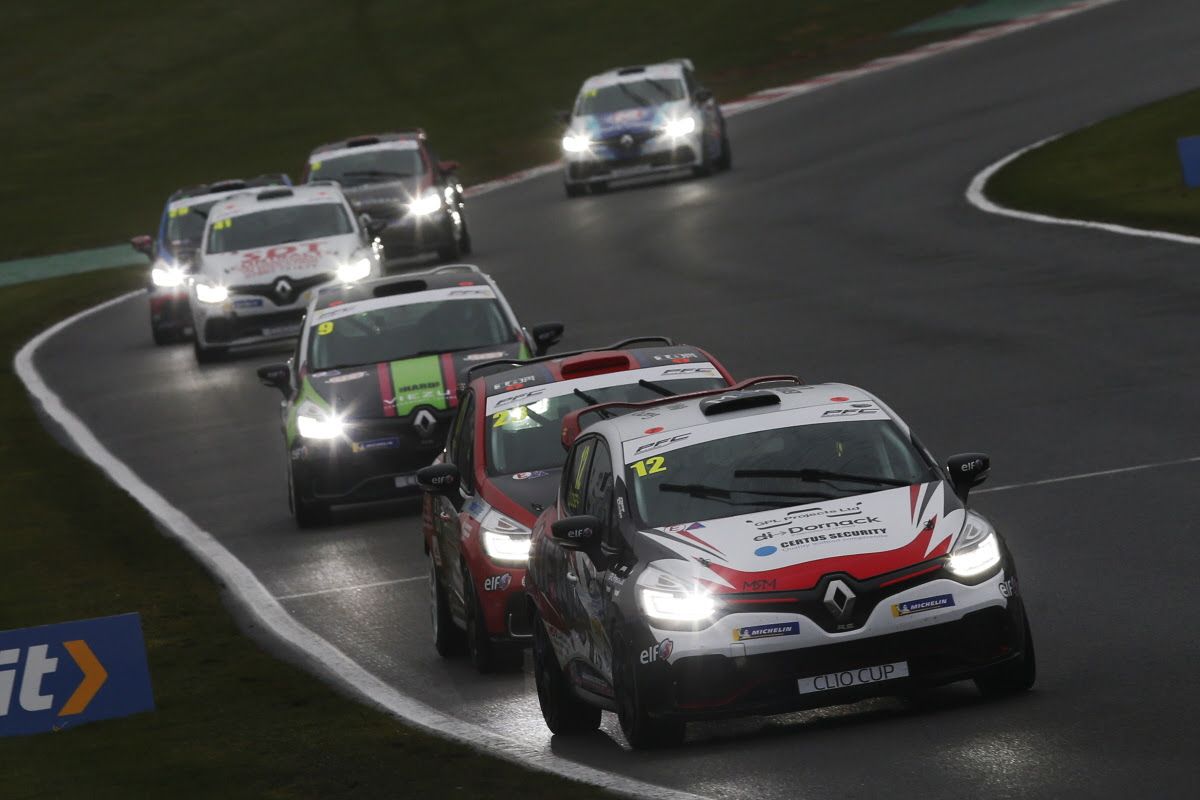 Brett Lidsey made an absolutely outstanding start to the 2019 Renault UK Clio Cup season at Brands Hatch Indy Circuit in Kent over the weekend, 6th/7th April, after racing to his maiden category podium in round one…before duly taking more silverware in round two.
Determined to make the strongest possible start to his second full season in the British Touring Car Championship feeder series, the 27-year-old Brands Hatch local did precisely that with third place in each of the contrasting encounters to secure third in the driver standings. Cheered on by friends, family and sponsors at his ‘home’ track, the MRM driver showed fantastic mettle in Saturday afternoon’s opening round to secure a hugely popular maiden podium in the category after a great battle with Ethan Hammerton.

In round two on Sunday, which was screened live across the UK on ITV4, Lidsey mounted a terrific fightback after an unfortunate first corner slide dropped him from second to seventh. Racing very impressively, the Kent sportsman was able to quickly regain his top three placing after a couple of early Safety Car periods to cap an excellent start to the new season.

“It’s been an amazing weekend, we managed to do what we came here to do”, said the elated Liftout, GHR Scaffolding Ltd, GPL Projects Ltd, Certus Security, Dornack, Taylor Made Decals, MS Motorsport and MSY Grab Hire & Mini Digger Hire backed racer, “I’m really pleased with our pace and performances all weekend, the team gave me a great car and everyone did a fantastic job.

This is just the start to the season we wanted, we were within a couple of tenths all weekend and to be on the podium in the first two rounds is a big turnaround from how last season started. We’ve sorted out qualifying to an extent, so I’m going to be pushing at Donington to keep this momentum.”

Eye-catching start to 2019 for Clio Cup contender Lidsey
Lidsey made just the start he’d intended during the two practice sessions on Friday, lapping within just 0.1 seconds of the top of the times in the opening run with a time of 52.603 seconds (82.66mph) and remaining fourth fastest in the afternoon with an improved lap of 52.375 seconds (83.02mph).

Continuing his form into qualifying on Saturday morning, Lidsey was again rapid and posted a best time of 52.499 seconds (82.83mph) to secure fourth on the grid for the opening race of the 2019 season and third for race two with his second best lap, a career-best effort in the series.

Rain prior to Saturday afternoon’s contest resulted in a slippery track surface and at the start Lidsey revelled in the conditions, making a terrific getaway to leap up into third on the run to Paddock Hill Bend and then sticking closely to the top two.

Into the second tour he was just a couple of tenths of a second shy of the leaders and as Max Coates was challenged by Jack Young at Paddock, Lidsey saw his opportunity to try and squeeze between the pair on the run up to Druids. While almost seizing second, he had to instead tuck back into third behind MRM team-mate Young and stayed close behind him into lap three.

As the race passed mid-distance Lidsey started to come under pressure from Ethan Hammerton and on lap 13 he ran wide at Druids, enabling his rival to successfully challenge into Surtees. Lidsey was determined to hit back, though, and did so the next time around with a great pass at Paddock Hill Bend to regain third which he maintained to the finish despite significant pressure from Hammerton.

“I’m really proud of the way I battled and kept Ethan behind”, reflected Lidsey, “It was very slippery out there in the first race, I had a lot of understeer, and when he came by at Surtees a few laps from the end I thought that was it – but I got him back straight away at Paddock which was great.”

Sunday’s timetable was impacted by low-lying fog, preventing any racing at all for the bulk of the morning, and as a result track conditions remained slippery. When the Clio Cup race got underway around 90 minutes later than scheduled, Lidsey lined-up third on the grid and justifiably targeted another podium challenge.

Making another fantastic launch, Lidsey challenged for second straight away but as the pack rounded the right-hander the No.12 Clio stepped out and Lidsey had to summon all of his skills to get the car under control. Although doing so impressively, the delay dropped him to seventh place.

Following a couple of early Safety Car periods in quick succession, Lidsey set about the task in hand and made swift progress back through the order. By lap nine he was back into the podium placings and spent the remainder of the 22-lap contest there to make it terrific back-to-back podiums.

There is now a three week break from action with rounds three and four of the Renault UK Clio Cup season taking place at Donington Park National Circuit in Leicestershire on 27th/28th April.