Dramatic finale of the Mitas 4 Islands race on Lošinj 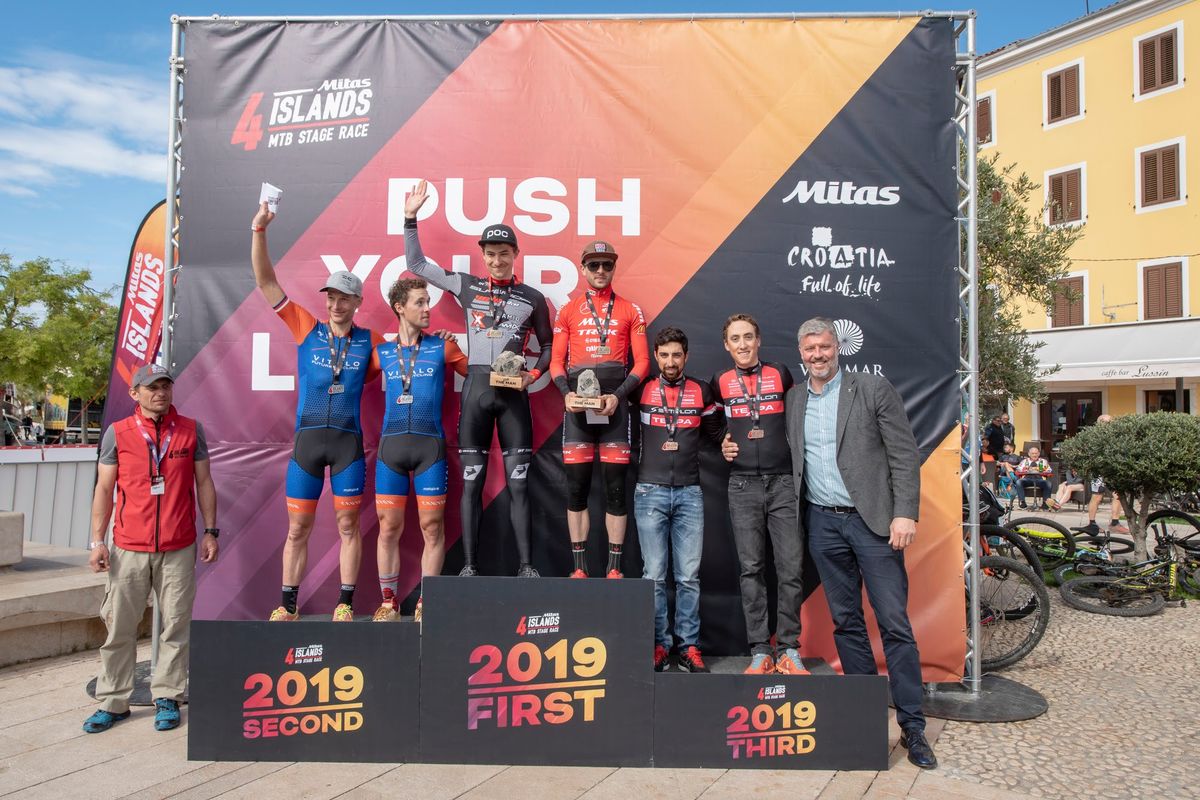 Despite the sixth place at the end of the last stage, Team Mitas CZE 1 sat on the race’s throne. The Focus Rapiro Racing-KMC Team elegantly won the women’s category. Spaniards of the Orbea Factory Team celebrated their victory in the Master category by jumping into the cold sea.

ension could be cut with a knife at the Mitas 4 Islands race end line in Mali Lošinj. With only a few hundred meters of track left before the mountain bikers, it was clear that the last stage’s winner would be decided by hundredths of a second, and the race’s winner by seconds.

That is exactly what happened. Team Texpa-Simplon, featuring German Marc Stutzmann and Swiss Michael Stuenzi, passed through the end gate just one-hundredth of a second before the Czech team Vitalo Future Cycling and thus won the first place in the Mitas 4 Islands race’s final stage in the men’s category.

The overall winners of that category are Filip Adel and Jan Škarnitzl from the Team Mitas CZE 1.
“The race was truly crazy! It was tense until the very end and the overall winner was really decided by nuances. We had some technical problems on the track, which slowed us down a lot, so we finished today’s race in the sixth place. Looking at the overall race results, I see that we were a minute ahead of our compatriots from the Vitalo Future Cycling team in the end,” said Filip Adel, who also climbed the same podium last year.

His team now has no less than two victories and one second place in the Mitas 4 Islands race. Therefore, the race organizers also predict a great performance at the next year’s Olympics from him.
“Since this is an S1 category race according to the UCI and it brings its winners valuable points for competing at the Tokyo Olympic Games, next year, we’ll be glad to cheer on mountain bikers who honed their skill on Kvarner islands,” race director Igor Lončarić Rulj pointed out.

Drama also followed the Orbea Factory team’s performance on Lošinj. They have been winning the Master category for days, only for Daniel Ruan’s bicycle chain to break about two hundred meters before the race’s end, so his teammate Tomi Misser literally pushed him to the end line. That way, Hungarian team Speed-Way were the first to reach the end line, but the Spaniards were announced as the race’s winners in the Master category. The temperamental duo celebrated this event by jumping into the still-cold Adriatic Sea. Air and sea temperature was 14 degrees, but the wet cyclists carried on with their celebration as if it were a hot summer day.

The women’s category was elegantly won by the Focus Rapiro Racing-KMC Team, consisting of German Cemile Trommer and Dutch Karen Brouwer. They clearly dominated the category from the prologue to the race’s end.

Slovene Peter Vesel and German Thorsten Damm, who make up the Keindl Sport-Bike & Ski team, rode out the same story in the Grand Master category.

Experience matters, or so it seems. That is, the overall winners list contains no less than two names who have been participating in the Mitas 4 Islands race for five years now - Roset and Vesel.

The organizers are delighted by the fact that the race, alongside its faithful participants, continues to attract new ones every year - ranging from Canada to New Zealand.

“The Mitas 4 Islands race is a prime example of a well-organized sporting manifestation which attracts numerous contestants, as well as visitors from every part of the world, since the race is open to recreationists, to four Croatian islands in the pre-season period. This was also recognized by the Croatian Tourist Board, which supported the race through its Sporting Croatia program this year,” said Dubravko Šimenc, head of CTB’s Strategic Marketing Projects Department, at the race winners’ awards ceremony.

For the organizers, the end of this year’s race means just a short break. That is to say, they are immediately starting to work on exploring new tracks and creating the most attractive possible next Mitas 4 Islands race.