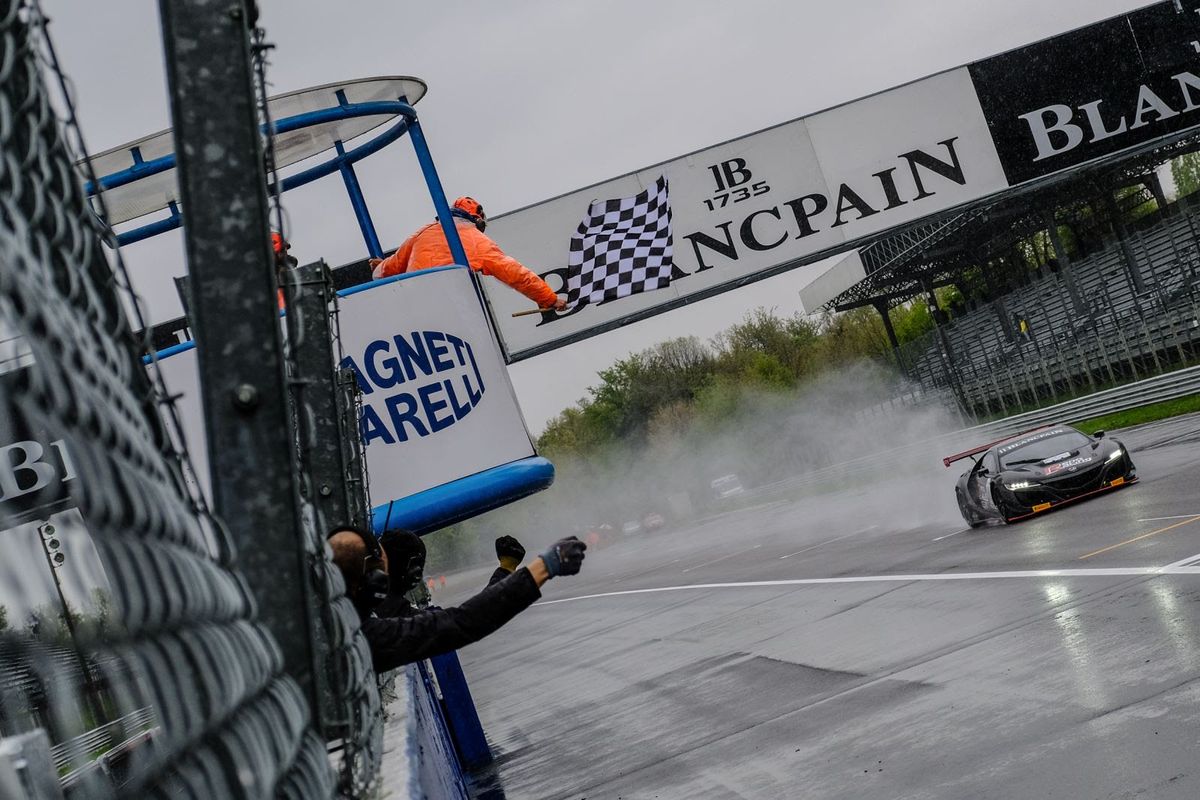 Reno Racing’s Jens Reno Møller made it two from two on his Blancpain GT Sports Club debut at Monza, with a controlled victory in wet conditions on board the #11 Honda NSX GT3 Evo ahead of Kessel Racing’s Murad Sultanov.

ERC Sport’s Lee Mowle also impressed on his maiden appearance, topping the Titanium Cup class whilst collecting an overall podium. In the Iron Cup, Kessel Racing’s Stephen Earle doubled up on yesterday’s victory to score another class win at the Temple of Speed, his third in four attempts.

The 30-minute race started under the safety car, with the heavy rain making for poor visibility at the Italian venue. Once the lights went out, Møller was able to pull a gap over AF Corse’s Mario Cordoni, who soon came under pressure from the fast starting #44 Mercedes AMG GT3 of Mowle.

Going from fifth on the grid, the British driver dispatched of both HP Racing International’s Coach McKansy and StileF Squadra Corse’s Pavel Strukov, before pouncing up the inside of Cordoni’s #51 Ferrari 488 GT3 on the entry to the first Lesmo to take second.

Then came a titanic battle for third, with Ferrari trio Cordoni, Strukov and Sultanov separated by less than a second over the next few laps. The Russian pair slipped by the Italian, but Strukov was caught out by the conditions in the first chicane, spinning his #777 Ferrari and allowing both back through.

As the race entered the final 10 minutes, Sultanov now had free air ahead of him and set a series of fastest laps to close the gap to Mowle in second. The #23 Ferrari 488 GT3 driver hounded Mowle’s Mercedes, who defended valiantly, but eventually had to concede the position at the Ascari chicane on the penultimate lap.

Sultanov sought about closing the gap to Møller on the final tour, but the Dane had enough in hand to take his second victory of the weekend, with the Kessel Racing driver coming home 3.636 seconds back. Mowle completed the overall podium in third, scoring his first Titanium Cup victory ahead of the #17 Lamborghini Huracan GT3 of Coach McKansy. The German initially dropped back to sixth, but completed an error-free race to finish fourth on the road and second in class.

Behind him was Cordoni, who lost control of his Ferrari at the Parabolica with five minutes left on the clock but minimised the lost time to finish fifth, collecting valuable points for the overall championship. Strukov recovered to sixth on his maiden Blancpain GT Sports Club appearance, showing promising underlying pace throughout the weekend.

Rinaldi Racing’s Vadim Kogay resisted pressure from Earle behind to take seventh on board the #33 Ferrari 488 GT3, whilst also scoring his second Titanium Cup podium. Iron Cup winner Earle was eighth adding more overall points to his sixth-place finish from race one.

Also taking part in his maiden Blancpain GT Sports Club round was Gerard van der Horst, who enjoyed another strong performance on board the 2019-spec Lamborghini Huracan GT3 Evo to finish ninth overall and fourth in the Titanium Cup class.

That concludes the opening 2019 Blancpain GT Sports Club round, which will head to Paul Ricard (1-2 June) next, once again in support of the Blancpain GT Series Endurance Cup.

Jens Reno Møller, #11 Reno Racing, Overall winner: “It was my first time in the wet in the Honda, so I was a little bit nervous about how the car would drive, but it’s fantastic in these conditions as well. I had a big advantage starting on pole as I didn’t have any spray, which meant I could pull away at the beginning. It was difficult to keep the temperature in the tyres, and I had to push at the end because Murad was very quick. A fantastic start of the season and I’m looking forward to the next one at Paul Ricard.”

Lee Mowle, #44 ERC Sport, Titanium Cup winner: “Much better than race one. We had a problem with the tyres yesterday, and the Mercedes is very strong in the wet. Saying that, because the car is usually so good on the tyres it meant we struggled to get temperature in them today. It was my first time here, so in the wet it was difficult to find the right line, but overall it’s good to be on the podium.”

Stephen Earle, #111 Kessel Racing, Iron Cup winner: “It was a smart decision to start behind the safety car as the vision was bad and there were spots where you could aquaplane. I felt quicker than the car ahead, but once you get close it’s a complete whiteout and you can’t see anything, so I was missing braking points. The car felt good and it was a fun race. I’d rather be in the dry, but I can’t complain about two Iron Cup pole positions and victories.”