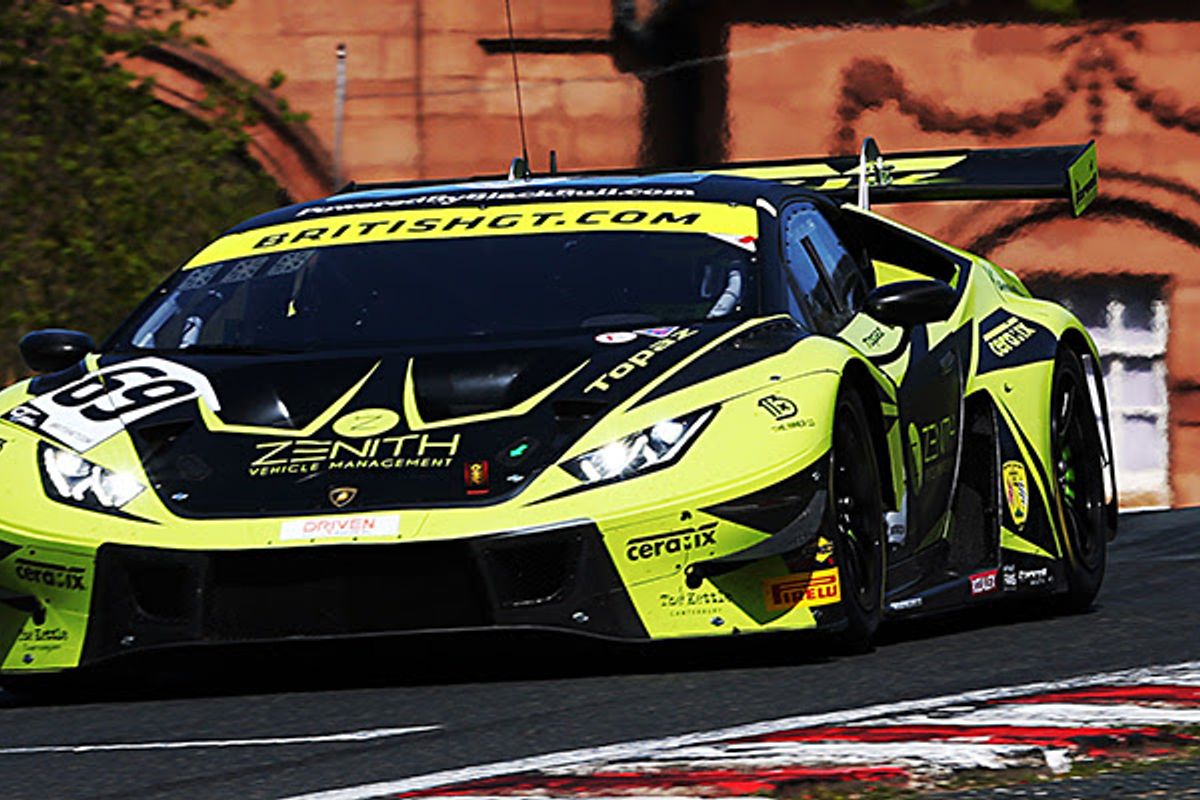 Adam Christodoulou and Richard Neary claimed theirs and ABBA Racing’s first GT3 podium with second after holding off Beechdean AMR’s Andrew Howard and Marco Sorensen in the closing stages.

An early Safety Car period to recover Michael Broadhurst’s Fox Motorsport Mercedes-AMG punctuated a lively start that saw Phil Keen convert pole position into a comfortable lead ahead of Adam Christodoulou, Seb Morris and Callum Macleod, who dropped back from second on the grid. Barwell’s #72 Lamborghini re-established its advantage once racing resumed after 13 minutes but couldn’t extend the lead beyond the seven seconds required to negate Race 1’s Pitstop Success Penalty.

Another Safety Car at half-distance to recover Mark Farmer’s beached TF Sport Aston Martin reduced the gaps once more, and when racing resumed with 15 minutes remaining it was anyone’s guess who would prevail.

Neary initially rebuffed De Haan’s approaches but eventually succumbed to the mounting pressure by running wide at Hislops. The Lamborghini swept around the outside before bolting to a two-second victory over the Mercedes-AMG. It was De Haan’s maiden British GT victory and Cocker’s first since 2007 at Thruxton.

Loggie also came unstuck in the closing laps when he ran wide at Cascades, which allowed Howard and co-driver Sorensen to climb the final step on the podium. The pair finished 1.8s behind Neary and just two tenths clear of Balon who spent the final 10 minutes swarming all over the Aston Martin’s rear bumper.

Dominic Paul and Ben Green made it two fifth places in as many races after again dicing with Century Motorsport team-mates Adrian Willmott and Jack Mitchell, while Optimum’s Ollie Wilkinson and Bradley Ellis made ground in the race to complete the top-six following Parfitt Jnr’s spin in the closing stages.

Team Parker’s potential top-six also came to naught on the final lap when Ryan Ratcliffe picked up a puncture, which helped RAM Racing salvage seventh ahead of Michael Igoe and Adam Wilcox’s WPI Motorsport GTC-spec Porsche. Willmott and Mitchell rounded out the top-eight.

De Haan and Cocker’s first and fourth places from today’s two races see the duo lead Barwell team-mates Balon and Keen by seven points in the Drivers’ standings. Parfitt Jnr and Morris are three further back in third.

At face value, victory after starting on pole sounds like a routine day for Seb Priaulx and Scott Maxwell. However, it was anything but for the #15 Multimatic Mustang which had work to do after the pitstops.

Priaulx, who also set Sunoco Fastest Lap, led the opening stint from start to finish ahead of fellow front row starter Scott Malvern and Matthew George, who jumped up three places from his grid slot. Two-second intervals separated the Ford, Mercedes-AMG and Jaguar, which circulated on their own out front.

That was party due to the fourth pace scrap that raged up until GT4’s pit window opened after 28 minutes. Josh Smith’s Tolman McLaren led a train of five cars featuring Martin Plowman, Luke Williams, Lewis Proctor and Angus Fender.

However, Race 1’s Success Penalties and the additional 14s served by all Silver Cup crews turned the order upside down once the pitstop cycle, which coincided with the second Safety Car period, concluded.

Malvern’s Team Parker co-driver Nick Jones now found himself out front ahead of Steve McCulley’s Jaguar, while the best-placed Silver – Scott Maxwell – was right behind the Ams once racing resumed. Both performed admirably against their Pro rival. Indeed, it was only Jones’ fading brakes that resulted in him losing the lead as well as an overall podium in the closing laps.

Both also dropped behind Graham Johnson whose Balfe Motorsport McLaren again made headway in both stints after Michael O’Brien started 13th. His co-driver’s shorter pitstop helped the 570S emerge in fourth before Johnson hounded Maxwell all the way to the finish en route to Pro/Am victory.

He was pursued until the final lap by Beechdean AMR’s Kelvin Fletcher whose own podium chances ended when he was tapped into a spin amongst traffic.

Jones and Fletcher both regrouped to finish fourth and fifth behind McCulley, while Tolman’s #5 McLaren shared by Proctor and Jordan Collard completed the top-six ahead of Tom Jackson and Luke Williams’ HHC 570S, Multimatic’s second Mustang shared by Jade Buford and Chad McCumbee, and the Track Focused KTM which recovered from its Race 1 retirement to come home ninth in Mike McCollum and Sean Cooper’s hands.