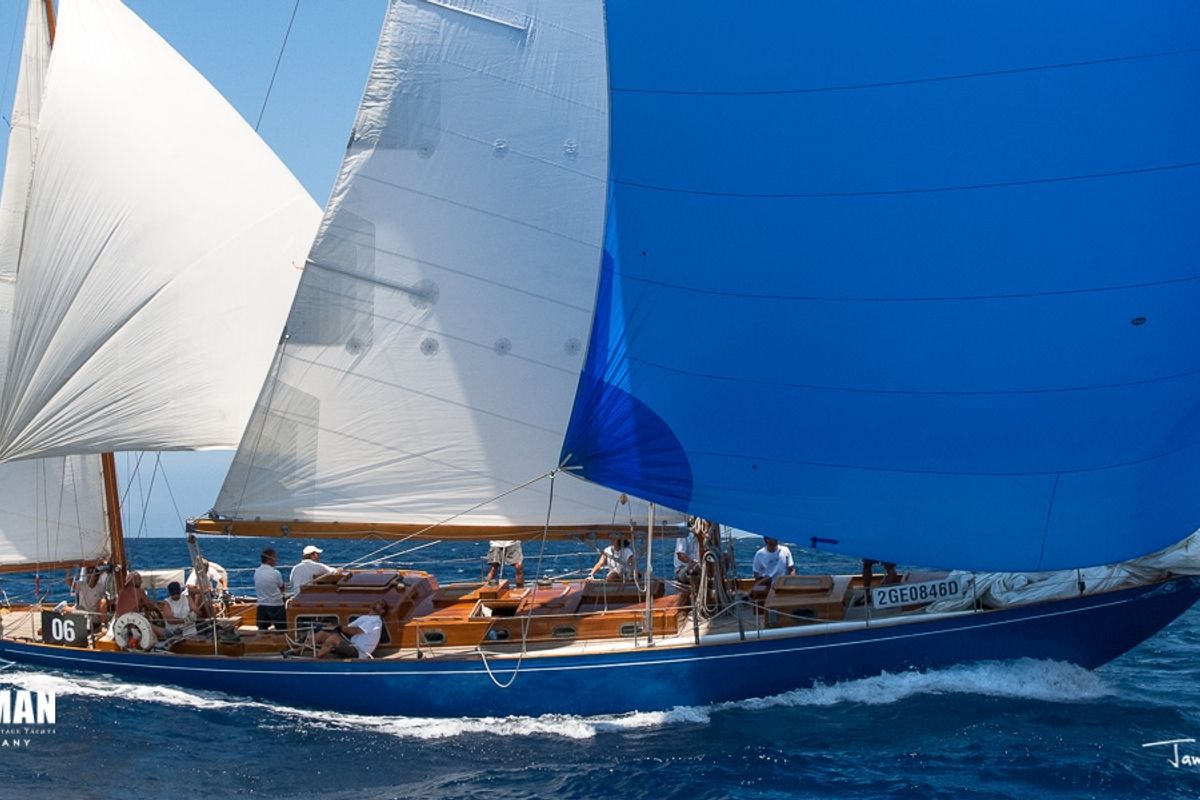 MARJATTA is a very fine example of the American influenced work of one of the Baltic Sea's most accomplished mid-20th Century offshore yacht designers, Finland's Jarl Lindblom. His easy on the eyes lines have enchanted a select group of lucky owners over the years: MARJATTA is a hard boat to part with, a rendezvous of looks, comfort, power and speed - instantly recognised for that and her blue hull on the Mediterranean classic regatta circuit for the past 30 years. The opportunities to own this wonderful family cruiser/ racer have been few over the years. This may be the chance of a lifetime!

MARJATTA: a beautiful name for a beautiful yacht that had a good start in life at a time when, in a world gone mad, few yachts were being built anywhere. The name is after commissioning owner, Finnish/ Swedish paper and glass industrialist Hans Ahlström's wife Marjatta Sibelius - yes, the composer was her uncle, her father's brother. The architect was Finland's leading designer of offshore yachts, Jarl Lindblom, and the builder, at Turku, was one of the Baltic's leading yards, Åbo Båtvarv.

A post-graduate period of extensive travel in Europe and the USA prior to establishing himself as a pleasure and commercial vessel designer in Turku, Finland, seems to have deeply informed Jarl Lindblom's yacht design work, helping to explain why much of it doesn't look particularly Scandinavian - although of course there is the old argument as to whether or not Finland is in Scandinavia. But there is no argument about MARJATTA - she is simply one of the best looking yachts of her size and type and era, with in particular the most elegant of overhangs. And she's fast.

Lindblom's background, and good timing, combined to take advantage of a 1930s flourishing of interest in Finland for cruising and racing further afield, and in purpose-built boats instead of converted inshore racing yachts. But MARJATTA's conception coincided with turbulent times for Finland which spent most of the Second World War fighting the Soviets. Despite her completion date of 1943 it seems quite probable that MARJATTA wasn't in fact commissioned until after hostilities ceased: there are stories of the local community working together to hose her down four times a day to prevent drying. Certainly the first suit of sails Lloyd's Register of Yachts lists dates from 1947, supplied by A/B Sport Artiklar, better known as sporting goods manufacturers, but also wartime manufacturers of tents for the Finnish army. Her original engine was a Swedish 2-cylinder diesel by Bolinder-Munktell. Interestingly, MARJATTA's second, 1958, suit of sails was by the American Hathaway loft of Greenwich, Connecticut.

Ahlström, a member of Nyländska Jaktklubben and Svenska Kryssarklubben and considered one of the forefathers of Finnish offshore sailing, would keep MARJATTA for the rest of his life, after which, in 1963, she was purchased by Genoa, Italy-based English-national, Yacht Club Italiano member and shipping agent, Astor William Norrish, who was stepping up in size from his previous David Boyd/ Cantiere Mostes 42ft sloop BAGHEERA, and Uffa Fox/ Medina Yacht Company "Flying 35", FLYING FOX.

The present owner acquired MARJATTA at Genoa in 1989. Few yachts enjoy such stable periods of ownership, and MARJATTA has been part of life around the YCI's Porticciolo Duca degli Abruzzi for 55 years - except of course when she's been the sweetest imaginable family cruiser on regular four-month family holidays in Italy, Greece and Spain; and impressing at classic regattas. She's also provided a training ground for one of Italy's finest offshore sailors, a key member of Giovanni Soldini's team for many years.

She's a true all-rounder - just as envisaged by Jarl Lindblom - and is ready to keep being so.

Offered by The Sandyman Yacht Company, click here for more