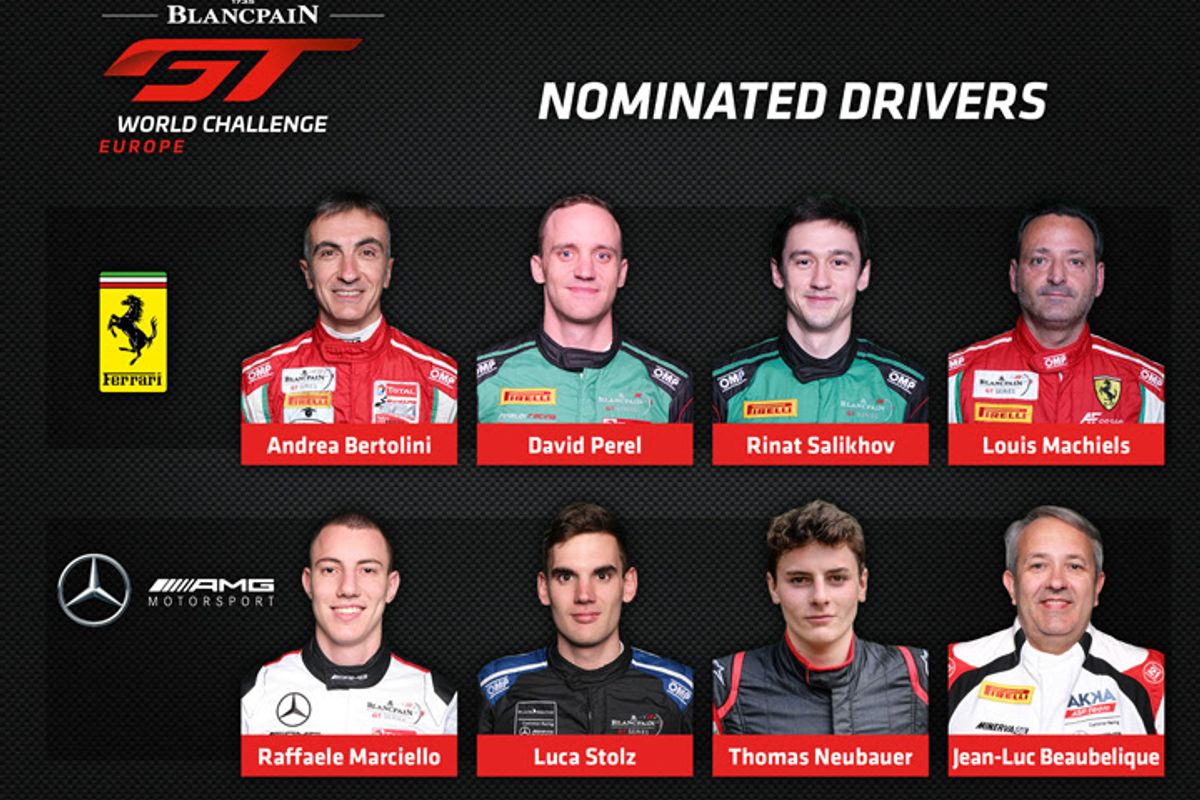 Ferrari and Mercedes-AMG have each revealed an impressive selection of drivers for the inaugural season of Blancpain GT World Challenge Europe, which is set to launch its five-round campaign at Brands Hatch on 4/5 May.
The European category sits alongside similar sprint-format series in Asia and America. As well as contesting standalone championships, each will see competing manufacturers score points towards the global Blancpain GT World Challenge through four nominated drivers on each continent.

During the concept's debut season, two of the world's leading automotive brands – Ferrari and Mercedes-AMG – will go head to head through their international customer racing programmes. With the Asian and American championships already underway, they are now set to compete on their home continent. Ahead of the European curtain-raiser, both brands have revealed the final pieces of their 2019 line-ups.

Andrea Bertolini
The vastly experienced Andrea Bertolini will be Ferrari's leading pro representative this season. The Italian racer has been part of the Maranello marque's development and competition setup for the majority of his career, earning success in a wide variety of championships. His major honours include three FIA GT titles and the 2010 FIA GT1 World Championship, which were achieved with Ferrari's sister brand Maserati. Driving the #52 488 GT3 for AF Corse, he will add vast experience and professionalism to Ferrari's European line-up.

David Perel
South African ace David Perel is the second driver nominated by Ferrari. The 33-year-old will compete for brand loyalist Rinaldi Racing in Blancpain GT World Challenge Europe as part of his full-season assault on the Blancpain GT Series. Perel's career in GT racing has been built upon hard work both on and off the circuit. To date, his most significant achievement has been to take successive class wins at the Total 24 Hours of Spa, triumphing in the Am Cup (2017) and Pro-Am (2018) categories.

Rinat Salikhov
Russian-born Rinat Salikhov has extensive Blancpain GT Series experience that stretches back to the 2014 season and includes numerous class wins. During this time he has competed exclusively using Ferrari machinery, while also remaining loyal to the Rinaldi Racing squad. Most notably, he clinched Pro-Am class honours at last year's Total 24 Hours of Spa as part of the same crew as Perel. He will share the #333 Rinaldi Ferrari with the South African racer this term.

Louis Machiels
The Ferrari roster is completed by Louis Machiels, who ranks among the most experienced and successful amateur racers in Blancpain GT Series history. Much of his success has come as part of a three-man Endurance crew alongside Bertolini and Dutch racer Niek Hommerson, including a brace of Pro-Am titles (2011 & 2012) and two class wins at the Total 24 Hours of Spa (2012 & 2014). Now extending his commitment to Blancpain GT World Challenge Europe, Machiels will share the #52 AF Corse Ferrari with Bertolini this term.

Mercedes-AMG
The Mercedes-AMG marque will hope to follow a hugely successful 2018 by adding the Blancpain GT World Challenge to its list of honours this season. The German brand has selected an impressive line-up to tackle the European portion of the championship, with two proven champions nominated alongside a rising talent and an immensely experienced gentleman racer.

Raffaele Marciello
The Mercedes-AMG contingent will be led by reigning Blancpain GT Series and Sprint Cup champion Raffaele Marciello. Though still relatively inexperienced in GT racing terms, the 24-year-old Italian is acknowledged as one of the most complete competitors currently active within the discipline. His one-lap pace is especially impressive, resulting in four front row starts from five Sprint Cup rounds in 2018. This term he will share with another former champion, Vince Abril, at AKKA ASP Team, as well as leading Mercedes-AMG's Blancpain GT World Challenge assault.

Thomas Neubauer
A newcomer to the Blancpain GT Series, 19-year-old Frenchman Thomas Neubauer makes the step up to GT racing from junior single-seaters this term. He will do so with the accomplished AKKA ASP Team, sharing a Silver Cup entry with reigning class champion Nico Bastian. Though inexperienced at this level, the conditions are in place for Neubauer to make a strong first impression and score crucial Blancpain GT World Challenge points for Mercedes-AMG in the process.

Jean-Luc Beaubelique
Like his Ferrari counterpart, Jean-Luc Beaubelique is among the most experienced gentlemen drivers in Blancpain GT Series history. He has competed in the championship since its inception, amassing multiple class victories and clinching the Am Cup title during the 2013 Endurance campaign. Throughout this period, the Frenchman has remained loyal to AKKA ASP Team and it is with Jerome Policand's renowned outfit that he will compete this term. Away from his Blancpain GT Series endeavours, Beaubelique also remains a front-runner in Championnat de France FFSA GT/GT4 France.

The Italian marque's contingent for Blancpain GT World Challenge America is led by Toni Vilander, with Martin Fuentes and Christopher Cagnazzi also nominated for the full season. Jeff Segal was part of the line-up for the season-opening event at COTA, while Matt Plumb will take his place for the remainder of the campaign.

In Asia, the Mercedes-AMG challenge is fronted by Danish star Christina Nielsen. She is joined by a trio of talented Asian-born racers: Xu Wei (China), Jeffrey Lee (Taiwan) and Roelof Bruins (South Korea). The Mercedes-AMG contingent for the American series features David Askew and George Kurtz lining up for the full season. Maxi Buhk and JC Perez were part of the line-up at the COTA season opener but due to force majeure, further to JC Perez’s injury sustained between events, a request for them to be replaced for the remainder of the campaign by Colin Braun and Ryan Dalziel has been accepted.

With their driver line-ups complete, both manufacturers will be targeting a successful opening to the European season at Brands Hatch. Ahead of the eagerly-anticipated British contest, Mercedes-AMG (1392pts) holds a slender advantage of four points over Ferrari (1388pts). Indeed, this close-fought battle for global glory will add an exciting subplot to what already promises to be a thrilling Blancpain GT World Challenge Europe season.