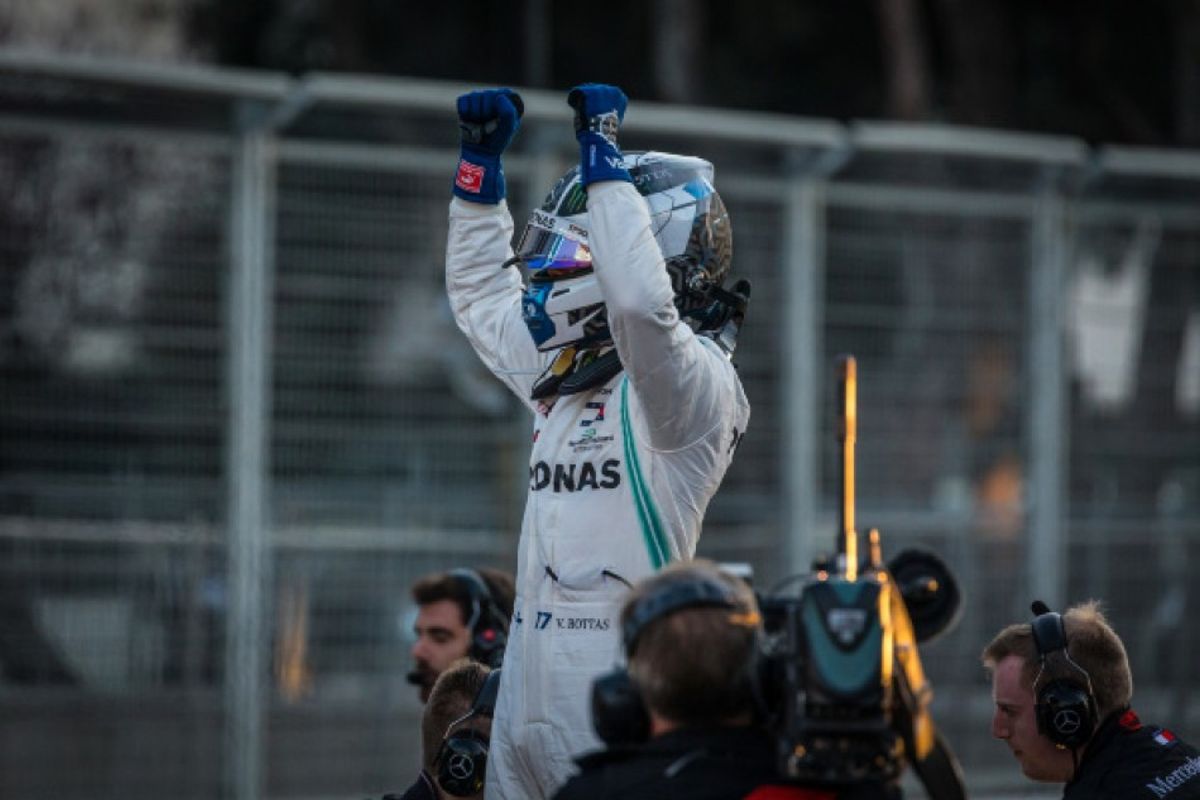 AS LECLERC CRASHES OUT

Bottas made the best of a tight final run in Q3, maximising a good two to edge team-mate Lewis Hamilton by just 0.059s, with Sebastian Vettel third ahead of Red Bull Racing’s Max Verstappen.

In Q1, Vettel led the early exchanges, setting a time of 1:42.348. His Ferrari team-mate Charles Leclerc, who had held sway in every practice session, soon bypassed that and his lap of 1:41.426, established a tough benchmark.

Verstappen, meanwhile, suffered a lock-up into Turn 7 on his opening run and his first lap left him in down in P12. On an improving track he was left vulnerable and he returned to the pit lane for a fresh set of tyres and prepared for another attempt.

Mercedes’ Lewis Hamilton was also having difficulty finding the sweet spot with tyres and after overcooking his entry to Turn 3 he was forced to take the escape road. He too would require more laps to make his way through to Q2, but eventually climbed to third place above Verstappen.

Pierre Gasly then provided proof of the rapid track evolution. The Frenchman who is facing a pit lane starting after being penalised for a missing a call to the weighbridge in FP2, set the quickest first sector on his second run. Then, benefiting from a tow provided by Racing Point’s Lance Stroll, he crossed the line in just 1:41.335 to claim a top spot he held until the chequered flag.

With Gasly first ahead of Bottas, Hamilton and Verstappen, and with the chequered flag out, there was drama at the end of the session. Williams’ Robert Kubica crashed heavily on the outside of Turn 8. The Pole clipped the barrier on the inside of the corner and was then pitched across the narrow track at high speed, hitting the opposite wall.

The session was red-flagged, and out went 16th-placed Stroll, followed by Haas’ Romain Grosjean, Renault’s Nico Hulkenberg, Williams’ George Russell and, in P20, the unfortunate Kubica.

At the top, with Gasly first ahead of Leclerc, Hamilton and Max, fifth place went McLaren’s Carlos Sainz, with Mercedes’ Valtteri Bottas sixth ahead of Vettel and Alfa Romeo’s Kimi Räikkönen and Antonio Giovinazzi.

After a lengthy delay to repair the barriers, Verstappen went quickest with an opening lap of 1:41.388. Team-mate Gasly, with a pit lane start in prospect, sat out the session.

Ferrari’s driver, meanwhile, took to the track on medium tyres and the choice bit Leclerc hard.

On his second run, the Monegasque driver carried too much speed into Turn 8 on tyres not yet in the window. He locked up, straight-lined the corner, and hit the barriers in the same spot as Kubica. The session was again immediately red-flagged.

Another lengthy delay followed. On the resumption, Vettel, who had dropped to P12 just ahead of the red flag, was first out on track, this time on soft tyres. The German vaulted up the order and a second flyer eventually netted him P5 ahead of Leclerc, Räikkönen, Norris, Kvyat and Giovinazzi. Eliminated at this stage were Sainz, Ricciardo, Albon, Magnussen and Gasly.

The finale of the marathon session proved to be thrilling. Verstappen was first out on track at the start of the segment and took provisional pole with a lap of 1:41.447. That was quickly bypassed by Hamilton, with the champion posting a lap of 1:40.703 to take provisional pole ahead of Vettel and Bottas.

As other peeled off track for new tyres and a second run, Verstappen without a fresh set available, stayed on track for a second flying lap and the Dutchman jumped to the front row with an lap of 1:41.069.

Vettel was first out in the final runs, prioritising good tyre temperature over gambling on a tow, and in the end it cost the Ferrari driver.

Vettel failed to match Hamilton’s opening run time and after crossing the line in P2 then had to watch as Bottas jumped ahead to claim pole position with a time of 1:40.495, just 0.059s ahead of Hamilton, who made mistakes in the opening two corners of his lap.

The second runs dropped Verstappen to fourth place. He will start alongside Vettel and ahead of Pérez. Sixth place went to Kyat, with Norris in seventh ahead of the Alfa Romeos of Giovinazzi and Räikkönen. Leclerc qualified in P10 but will move up one place on the grid as Giovinazzi is set for a 10-place grid penalty.