Toyota and Ford on pole for 6 hrs of Spa 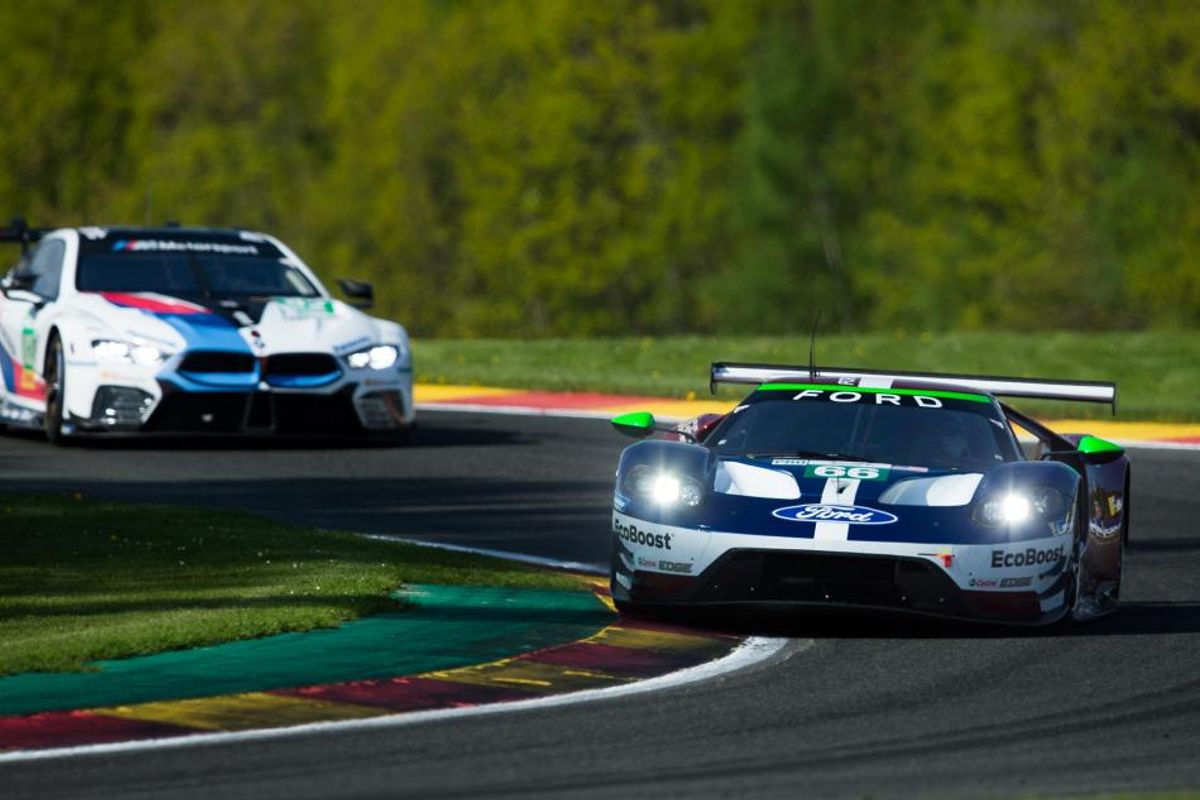 The seventh and penultimate qualifying session of the 2018/19 FIA World Endurance Championship Super Season saw Toyota and Ford come out on top to head their respective LMP and LMGTE grid in tomorrow’s Total 6 Hours of Spa-Francorchamps in Belgium.

Toyota Gazoo Racing claimed another 1-2 in qualifying with Kamui Kobayashi and Mike Conway setting an average lap time of 1m53.747s to claim their third pole of the season in the no7 Toyota TS050 Hybrid.  Conway also set the outright best lap of 1m53.683, 0.2 seconds faster than his Japanese teammate and 1.1 seconds faster than last seasons’ best qualifying lap.

The no8 Toyota Gazoo Racing car driven by Kazuki Nakajima and Sebastien Buemi was second and 0.496 seconds behind sister Toyota TS050 Hybrid with an average lap of 1m54.243.  SMP Racing took third and fifth with the no17 starting on row 2 with a 1m54.711 average, with the no11 BR1-AER on Row 3, 1.3 seconds behind their teammates.

The Bykolles LMP1 stopped on the start finish line bringing out a red flag with just under five minutes of the session remaining.  The session restarted but with rain falling all around the circuit and the best times already set only one car ventured out on the slippery track.

In the LMGTE Pro class it couldn’t be closer with three different manufacturers, Ford, Aston Martin and BMW, in top three and separated by just 0.092s

The LMGTE grid for tomorrow’s race will be headed by the no67 Ford Chip Ganassi Ford GT of Andy Priaulx and Harry Tincknell after Priaulx set a dramatic late lap to complete average of 2m12.885s to take second consecutive pole position for no67 Ford GT.

Priaulx’s lap edged out the Aston Martin of Maxime Martin and Alex Lynn, who set an average of 2m12.952s in no97 Vantage, just 0.067s in arrears.  The no82 BMW Team MTEK of Augusto Farfus and Antonio Felix da Costa combine with an average of 2m12.977 to place third

The LMP2 pole went to G-Drive Racing as Job Van Uitert and Jean-Eric Vergne secured the top position on an average of 2m00.674s.  Vergne sets best lap of 2m00.003s on track where G-Drive have won three times since 2014, including the 2018 race in Belgium.

Second and third in LMP2 went the way of the Jackie Chan DC Racing squad as no38 Oreca-Gibson driven by Gabriel Aubry and Stephane Richelmi just edges out no37 car of Will Stevens and David Heinemeier-Hansson.

The LMGTE Am category saw British team TF Sport claim their first WEC pole as Salih Yoluc and Charlie Eastwood beat opposition with average of 2m16.061s in the no90 Aston Martin Vantage.  Eastwood sets fastest lap on 2m15.016s to claim the top spot on tomorrow’s grid.

Second in class was the no88 Dempsey-Proton Racing Porsche of Gianluca Roda and Matteo Cairoli with a 2m16.171, while the points leading Team Project 1 Porsche of Egidio Perfetti and Jorg Bergmeister claim third position with a 2m16.390.