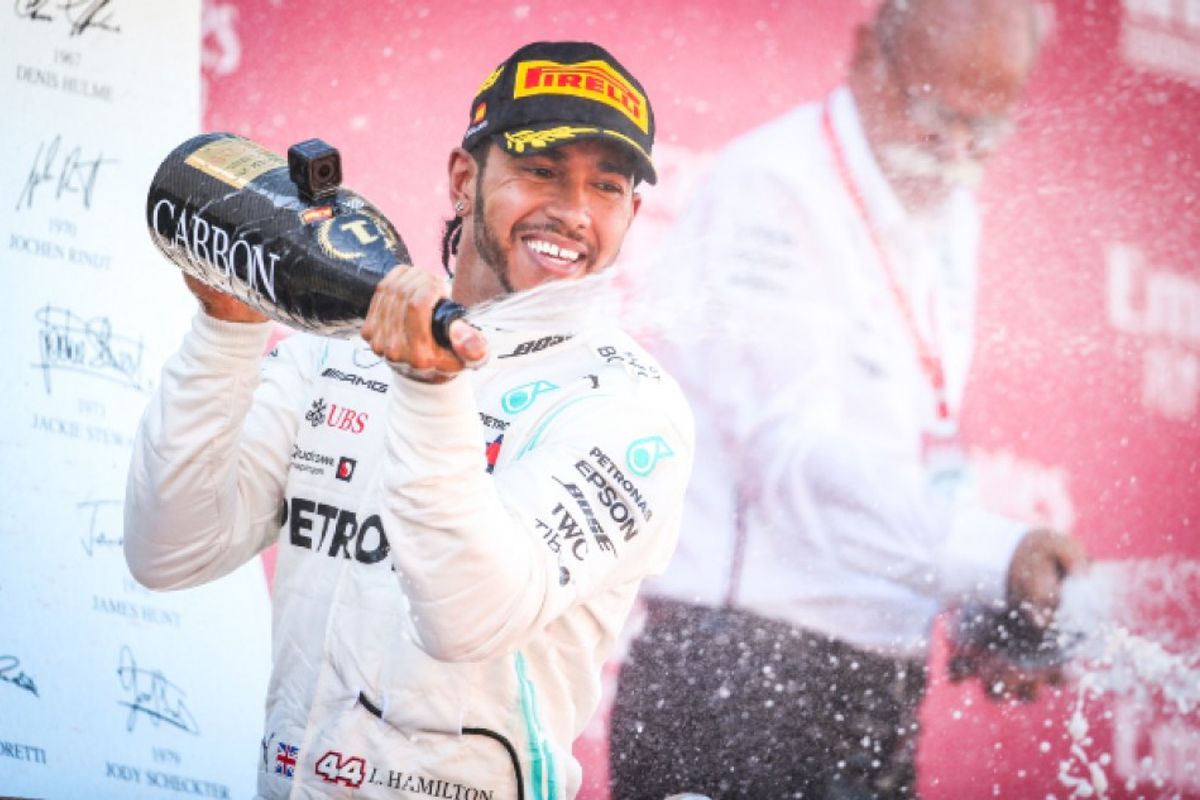 Lewis Hamilton moved back to the top of the FIA Formula 1 Drivers’ World Championship standings as he beat team-mate Valtteri Bottas to head Mercedes’ fifth one-two finish in a row. Max Verstappen finished third for Red Bull Racing, ahead of the Ferrari cars of Sebastian Vettel and Charles Leclerc.

When the lights went out at the start, it was Hamilton who made the best start and on the long run down to Turn 1 he tucked in on the inside of pole sitter Valtteri Bottas, who later complained of clutch problems on his getaway.

Ferrari’s Sebastian Vettel had also made a good start and he tried to pass both Mercedes around the outside into the first turn. It was a risky, late-braking move and attempting to keep control Vettel locked up briefly.

As Vettel got a poor exit from the corner, Verstappen pounced, passing the Ferrari in Turn 3 to take third place behind new leader Hamilton and Bottas.

Behind the front four Pierre Gasly in the second Red Bull was battling hard with the second Ferrari of Charles Leclerc and also coming under pressure from Haas’ Romain Grosjean. Gasly managed to defend well, though, and he kept P6 as the field crossed the line to start lap two.

Vettel, hampered by a flat spot sustained in his first-lap lock up and Leclerc quickly closed the gap to his team-mate. Vettel sensibly moved aside at the start of lap 12 and let his team-mate through.
At the end of lap 19, Vettel finally opted to shed his damaged tyres and pitted for a set of new medium tyres. Verstappen was next in and at the end of lap 20 he pitted for soft tyres.

Vettel quickly began to close up on Leclerc, who had pitted for hard tyres. The German was clearly quicker on his medium tyres than his young team-mate racing on hard tyres and soon after the halfway point Leclerc returned Vettel’s earlier favour by backing off into Turn 4 to let the German through to fourth place.

Vettel then attempted to close the gap to Verstappen and though the Ferrari driver cut the deficit by a few seconds, on lap 40 he again made his way to the pit lane. He took on a set of mediums at the end of the lap and was soon back up to fifth.

Verstappen was next to make his second stop and at the end of lap 43 he took on medium tyres. He emerged behind Leclerc and quickly began to close up behind the Ferrari driver as ahead Bottas pitted for soft tyres.

On lap 45, though, the Safety Car was brought into play when McLaren’s Lando Norris and Racing Point’s Lance Stroll collided, with both being forced to stop.
Both Hamilton and Leclerc elected to pit while the race was neutralised, with the Ferrari driver taking on medium tyres and the Mercedes driver fitting softs. Behind the Safety Car the order was Hamilton followed by Bottas, Max, the Ferraris of Vettel and Leclerc, while Gasly still held sixth.

When the SC left the track Hamilton set blistering pace on the restart to set the fastest lap of the race and to keep Bottas at bay. Verstappen also gradually eked out a gap to Vettel.
Fifteen laps later Hamilton crossed the line to take the 76thwin of his career with Bottas then taking the flag to continue Mercedes’s perfect start to the season.

Verstappen too his 24thcareer podium with third placed ahead of Vettel and Leclerc while Gasly finished as he started, in sixth place. Kevin Magnussen was seventh for Haas ahead of home hero Carlos Sainz. Daniil Kvyat took two points for Toro Rosso with ninth place but despite putting enormous pressure on Romain Grosjean in the closing laps, Alex Albon couldn’t make it two Toros in the points and Haas driver Grosjean managed to cling on to tenth place at the flag.