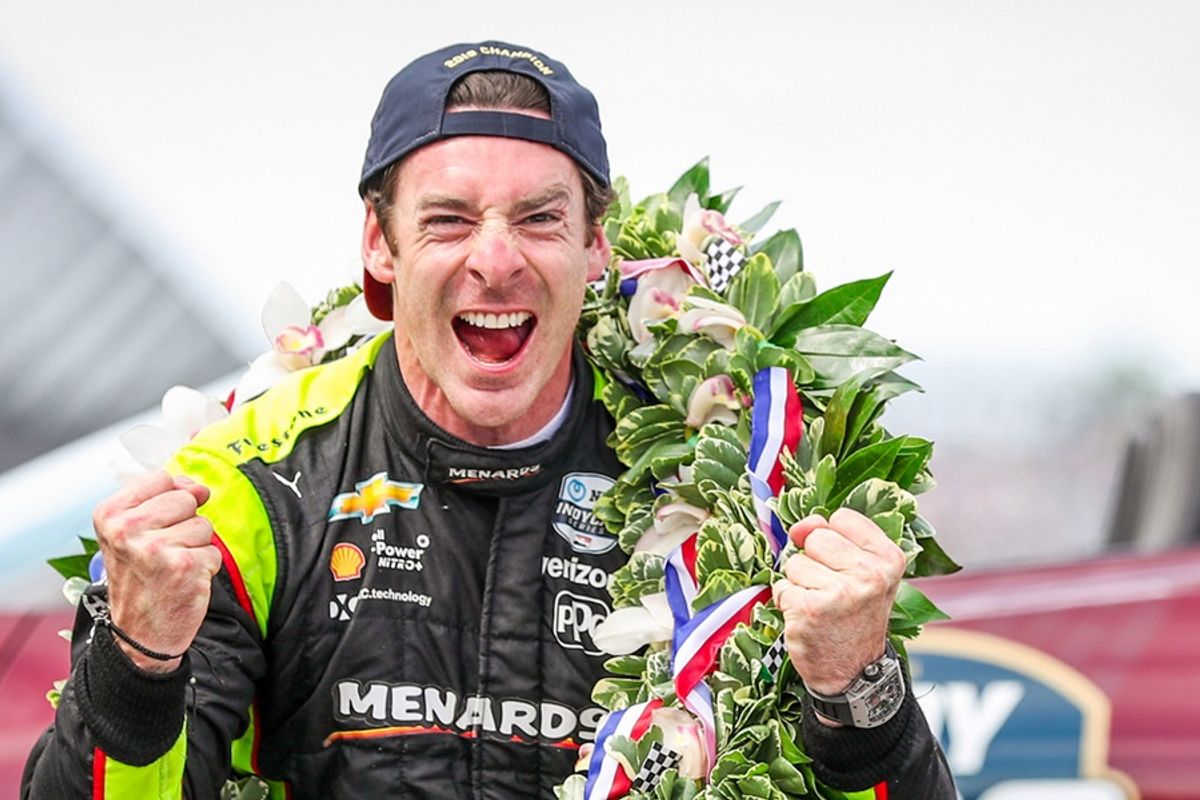 Simon Pagenaud completed his May mission with the biggest win of his racing life, capturing the 103rd Indianapolis 500 presented by Gainbridge in a duel for the ages and extending Team Penske's dominance in "The Greatest Spectacle in Racing."

Pagenaud edged Alexander Rossi by 0.2086 of a second following a thrilling clash over the final 14 laps at Indianapolis Motor Speedway that had the crowd at the world's largest single-day sporting event on its feet and screaming with excitement. It was the seventh-closest finish in Indianapolis 500 history.

"It's amazing. It's another dream come true, and the biggest dream of my life come true," said Pagenaud, the 35-year-old native of Montmorillon, France. "It's hard to fathom, really. It's really hard to process it right now, but I'm just filled with a lot of joy."

Pagenaud and Rossi swapped the lead five times in the closing laps, the last when Pagenaud roared his yellow No. 22 Menards Team Penske Chevrolet outside of and past Rossi's No. 27 NAPA AUTO PARTS Honda heading into Turn 3 on the 199th of 200 laps around the famous 2.5-mile oval.

From there, Pagenaud wasn't to be denied in collecting his first Indy 500 triumph and 13th career NTT IndyCar Series victory. On the heels of his win May 11 in the INDYCAR Grand Prix on the IMS road course, Pagenaud became the first driver to win more than one NTT IndyCar Series race this season and second Team Penske pilot to win both IMS races in the same year - following Will Power in 2018.

"I drove really spirited today, but it's just incredible," Pagenaud said. "I can't take all the credit because I think it showed I had the best car out there.

"The car was just on rails; the yellows came out perfectly. The stars are aligned. ... It's pretty amazing."

Pagenaud, the 2016 NTT IndyCar Series champion, also pushed to 18 the number of Indianapolis 500 wins for team owner Roger Penske. It's a total 13 more than the next nearest owner.

Pagenaud becomes the fifth driver born in France to win the Indianapolis 500 and first since former Team Penske driver Gil de Ferran in 2003.

"Simon wasn't going to be beat today," Penske said. "He raced clean, and that's what I have to say about Rossi also. The two of them for the laps that they ran side by side was as good of racing as you've ever seen here."

Rossi, the 2016 Indy 500 winner as a rookie, overcame two lengthy pit stops for refueling issues, charging back from mid-pack to contend for the win. The Andretti Autosport driver was in first place on the final race restart on Lap 187, following an incident involving six cars that included an 18-minute red-flag stoppage, but Pagenaud bolted ahead by the time they'd reached the iconic yard of bricks at the start/finish line to complete the lap.

The duo exchanged the lead twice on Lap 189 before Rossi swept back in front on Lap 198 heading into Turn 1. On the ensuing lap, Pagenaud made a similar outside pass, this time going into Turn 3, to take the lead for good. Rossi attempted several overtakes over the last one-plus laps but was thwarted each time. Still, his second-place finish marked the Californian's fourth top-seven Indy 500 result in as many tries.

"We were flat in that final lap coming to the flag - we just didn't have enough," Rossi said. "You can't take anything away from the (No.) 22 guys. They were on pole, they led a lot of laps, did a good job and had a fast race car.

"I think the NAPA car was superior if you look at what we were able to do in traffic. I don't think anyone else was doing that. It's really disappointing. I thought there was a period of time there where we were going to get the win."

Takuma Sato, the 2017 Indy 500 winner, recovered from pit-stop issues of his own, going down a lap early before recovering to finish third in the No. 30 Mi-Jack/Panasonic Honda for Rahal Letterman Lanigan Racing. It was just his second top-10 finish in his 10th Indianapolis 500.

"My race, (at) one stage it looked really tough," Sato said. "We got some little issues after the first pit stop, so we had to come back.
"I think it's still great result to the team, especially considering we were a lap down in 31st. I think it was great."

Newgarden placed fourth in the No. 2 Shell V-Power Nitro Plus Team Penske Chevrolet, his fifth top-four finish in six races this season. Power finished fifth in his effort to become the first back-to-back Indianapolis 500 winner since Helio Castroneves in 2001-02.

Santino Ferrucci was the highest-finishing rookie, taking seventh place in the No. 19 Cly-Del Manufacturing Honda for Dale Coyne Racing.

The race featured 29 lead changes among 10 drivers. Pagenaud led 116 laps - the most in the race since Dario Franchitti led 155 laps in his 2010 win - in becoming the first Indy 500 pole sitter to go on and win since Castroneves in 2009.

There were five caution periods for 29 laps, including the Lap 178 incident involving Sebastien Bourdais, Graham Rahal, Scott Dixon, Felix Rosenqvist, Charlie Kimball and Zach Veach. It began when the cars of Bourdais and Rahal made contact in Turn 3, with the others collected in the aftermath. All the drivers were checked and released from the IU Health Emergency Medical Center at the track, though Veach will undergo further examination for soreness in his right knee. The race was red-flagged for 18 minutes to allow the AMR INDYCAR Safety Team and track workers to clean the debris.

Crewman Chris Minot was taken to IU Health Methodist Hospital for further evaluation of a leg injury after he was struck in a pit-lane incident involving his driver, Jordan King, in the No. 42 Rahal Letterman Lanigan Racing Honda.

The NTT IndyCar Series returns to action May 31-June 2 with the Chevrolet Detroit Grand Prix presented by Lear, the only doubleheader weekend on the 2019 schedule. The races airs live on NBC and the Advance Auto Parts INDYCAR Radio Network at 3 p.m. ET both Saturday, June 1 and Sunday, June 2.

Results Sunday of the 103rd Indianapolis 500 presented by Gainbridge NTT IndyCar Series event on the 2.5-mile Indianapolis Motor Speedway, with order of finish, starting position in parentheses, driver, chassis-engine, laps completed and reason out (if any):