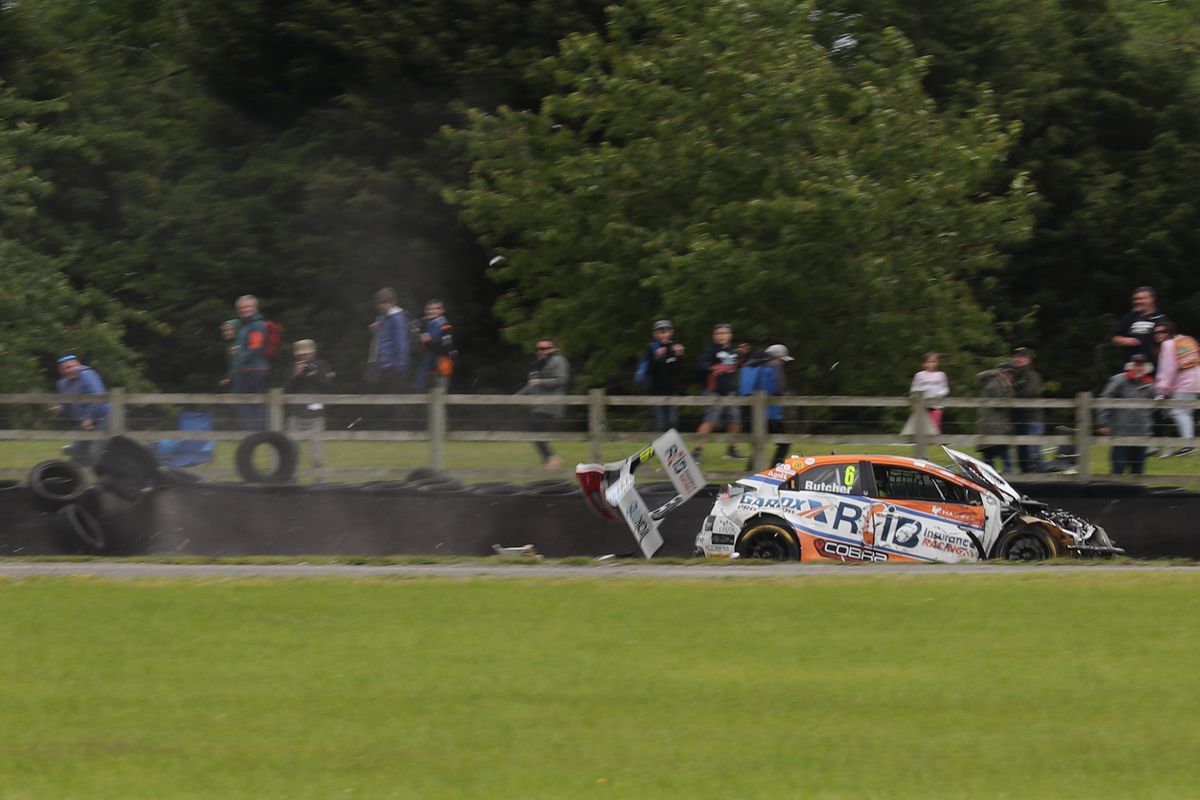 Image: Andrew Jordan came out on top in qualifying at Croft Below top: It was an incident-packed session, and Rory Butcher's car came off worst – leaving the joint-standings leader starting race one from the back

Andrew Jordan claimed pole position in one of the most disjointed qualifying sessions in the history of the Kwik Fit British Touring Car Championship at Croft.

A fifth red flag stoppage eventually ended the session prematurely and it was an off for Jordan that ironically brought a close to proceedings. The new-for-2019 qualifying rule states that a driver causing a red flag in qualifying will lose their fastest lap time up to that point and take no further part in the session, which could have put paid to a first pole position since 2014 for Jordan.

Concern quickly turned to relief and joy for the 30-year-old however, when it was realised that his second fastest lap time was still good enough for P1.

The first three red flags came about as a number of cars made contact with safety barriers lining the circuit, which then needed to either be returned to their position or replaced. Nic Hamilton was among those casualties, with damage to the front-right of his Ford Focus forcing him out of the action.

The penultimate stoppage was the most dramatic. Joint championship leader Rory Butcher lost control on the exit of the chicane, and his Cobra Sport AmD AutoAid/RCIB Insurance Honda fired across the track and into the barrier. A lengthy delay followed in order to remove Butcher’s stricken Civic Type R as the rest of the pack waited for a final flourish around the newly resurfaced 2.13-miles of Tarmac.

Light drizzle added to the tension but when Jake Hill and Chris Smiley improved on their previous lap times it looked as if we could be building to an exciting climax.

A puncture for Jordan, however, eventually sent the BMW Pirtek Racing 3 Series out of control at slow speed on the run to the Complex. Jordan’s car slid gingerly off-track and eventually came to rest on the grass, leading to a fifth and final red flag halt.

The decision was made to the wave the chequered flag shortly afterwards, with the final classification confirming that Jordan had claimed his first pole position for BMW and West Surrey Racing.

BTC Racing’s Smiley was one of the more fortunate drivers to get a late flying lap completed and the talented Northern Irishman did enough to take second ahead of Team Shredded Wheat Racing with Gallagher’s Tom Chilton.

Team BMW duo Colin Turkington and Tom Oliphant were fourth and fifth respectively, with four-time Croft race winner Ash Sutton next up in sixth place. Despite the lack of running on-track during the session, the likes of both Turkington and Sutton will be pleased to have at least set a representative lap time and taken up berths at the sharp end of the field in the process.

Halfords Yuasa Racing’s Dan Cammish was next on the timesheets, ahead of Ollie Jackson (Team Shredded Wheat Racing with Gallagher) and Jake Hill (TradePriceCars.com). Sterling Insurance with Power Maxed Racing’s Jason Plato completed the top ten, continuing his run of solid qualifying results so far in 2019.

Rounds 10, 11 and 12 of the 2019 Kwik Fit British Touring Car Championship will take place at Croft tomorrow (16th June) with all the action being screened live on ITV4 from 11:15.

Andrew Jordan said: “I was sat stuck in the mud thinking we’d have everything taken from us but we had a puncture. I was going so steady and when it started to drizzle I just had nothing heading into the Complex. I did it when it counted and luckily our second best time was good enough for pole. 2014 must have been the last time I had the pole. There were lots of red flags, I can’t remember as many in a session and I caused one but it was good for me. It’s a first pole with West Surrey Racing and it’s a top result for BMW Pirtek Racing, too. I’ve had three wins, which is a lot. I want to win the race, of course, but we’re in a good position. I want to take points out of Colin (Turkington) and we’re in a good position to do so.”