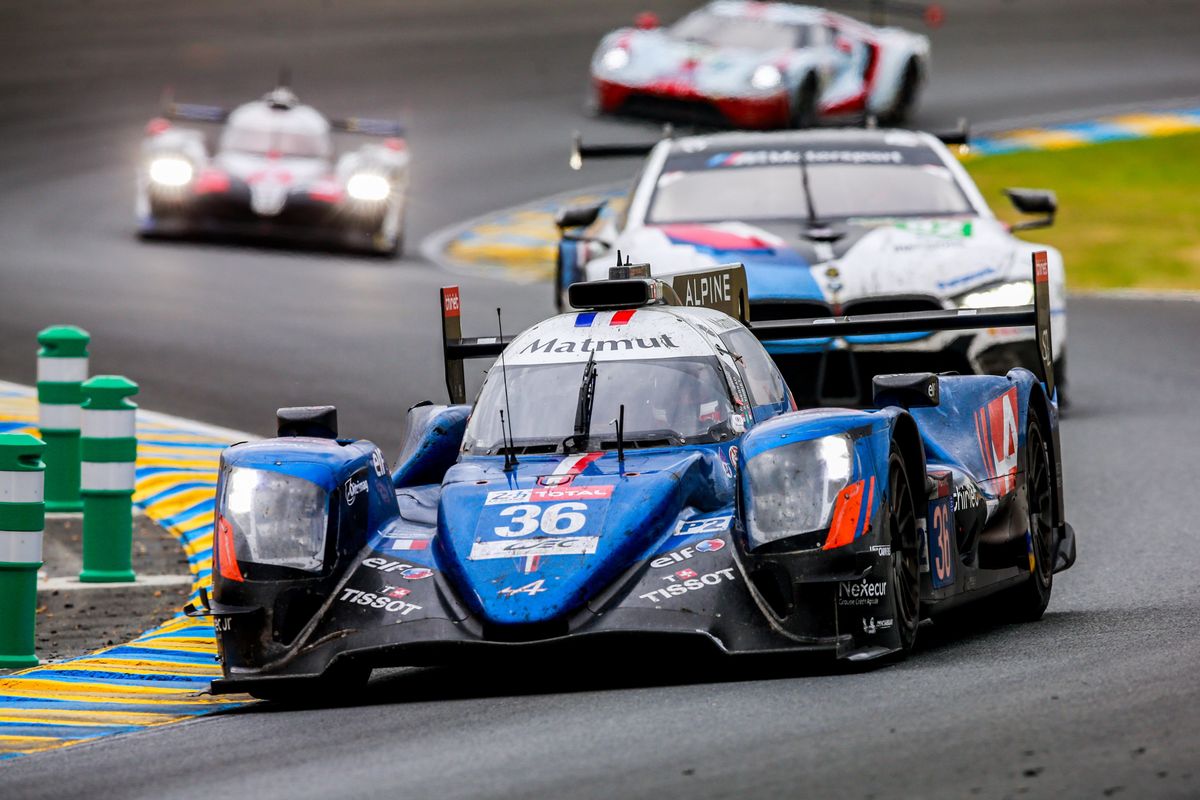 At the end of a challenging edition, the Signatech Alpine Matmut team has won the LMP2 category of the 24 Hours of Le Mans for the third time in four years.
With eight podium results in as many races, Nicolas Lapierre, André Negrão and Pierre Thiriet have taken the second crown for Alpine in the FIA World Endurance Championship.
This resounding victory concludes a week that included the presentation of the new Alpine A110S.

Sticking to tradition, the 87th edition of the 24 Hours of Le Mans began at 15:00 on Saturday and Nicolas Lapierre immediately picked up one position to move up to second place in the LMP2 category.

Staying out longer that his most serious rivals, the Frenchman was in the lead on the eighth lap. Once his first double-stint was done, the Signatech Alpine Matmut driver completed a triple-stint while trying to contain the n°26 G-Drive, whose return was eased by a more aggressive strategy.

This duel continued when the driving duties were handed over to Pierre Thiriet, then André Negrão, who got into the car at the beginning of hour six.

As the sun set, the yellow flags, slow zones and neutralizations multiplied as it began to sprinkle at the Circuit de la Sarthe. The Brazilian drove brilliantly in the tricky conditions to put the Alpine A470 into the lead again before his rival answered back, on fresher tyres.

Following a pit stop affected by another LMP2 competitor at the one-third mark of the race, Nicolas Lapierre and Pierre Thiriet took over to chase down the leaders.

The French had his share of misadventures during the night as two neutralizations in his first two stints radically changed the physiognomy of the race. The safety car intervened between the n°26 and n°36 Alpine A470 costing Les Bleus a minute in the first intervention, then precious seconds in the second safety car period.

Relegated to two and a half minutes from the leaders, Pierre Thiriet completed his triple-stint before letting André Negrão and Nicolas Lapierre go on the attack before dawn. While they made up a minute in the early hours of Sunday morning, their efforts were annihilated by the accident of the n°31 Dragonspeed, which brought the safety car out yet again.

In the aftermath, the team adjusted its strategy by sending Pierre Thiriet out seven hours from the finish. The team’s determination and perseverance finally paid dividends when the leaders remained in the pits just after 9:00. The Alpine A470 moved into the lead with a one lap advantage from its closest rival and last challenger still in the title fight.

From then on, the trio continued to set competitive times while managing their lead and equipment.

After the last stint of André Negrão, Pierre Thiriet went back out to reach his minimum time in the car before Nicolas Lapierre got back in to finish the race.

In his final race with Alpine, Nico took the chequered flag to take his third win at Le Mans in four participations with the French brand.

This victory is also the third for Signatech Alpine Matmut at Le Mans, following its successes in 2016 and 2018, and the fifth podium in the LMP2 category since 2014. And this triumph ahead of the n°38 Jackie Chan DC Racing sees Alpine score its second LMP2 title in the FIA World Endurance Championship, following its 2016 crown… A crown the team will be ready to defend at the opening round of the 2019-2020 season on September 1st at Silverstone!

“I said we were ready and we truly were. The competition was just as ready, which made for a very intense start to the race with a much faster pace than usual. This promised a long and fantastic battle, where we were not surprised to find ourselves mixing it up with the main contenders for the win and the title. We were very tightly bunched just until night fall, then, yet again, Le Mans chose its champion. You have to be ready and present in these conditions. We were in every aspect: the car stayed out of the gravel areas, we made the right choices, had great communication and we adapted. This is the key for an event of this stature and we really enjoyed ourselves. This victory has a special meaning compared to last year’s, because we were able to celebrate together right after the race and we got to hear the French national anthem on the podium. We will have to quickly get back to business because the next challenge, the prologue, will be here before you know it!”

“What a day for us and the entire team! It was essential and crucial in the outcome of the championship and this legendary race that is the 24 Hours of Le Mans. We worked for more than a year to attain both of these objectives. We decided to give priority to the world championship title, but once the race started, we fought with all we had against G-Drive. They were not a championship rival, but we had to respect this legendary race by fighting for the victory. Our work paid off and the win clinched the title for us. It is a very big mix of emotions, but also satisfaction of a job accomplished in a race that was very hard and competitive. For me personally, this is my last race with Alpine. Maybe we will reunite in the future, but it was important to finish the way we did and we can’t be anything but proud of this team and everything we have achieved together.”

“The top step of the podium is truly a magical place and I am proud to be there with Alpine and the entire team. Not only did we win the 24 Hours of Le Mans for the second straight year, we also won the championship. I am in heaven and I think I am the happiest among us today. I have just won my first title and I will remember it for the rest of my life. I want to give a humungous thank you to the Signatech Alpine Matmut team, to Philippe as well as Alpine and everyone that has believed in me, supported me and allowed us to achieve this wonderful double together.”

“It was a crazy race. The battle was really intense and contested, but we expected it against quality competitors who were clean and fair on the track. I really want underscore the job the team has done in preparing for every round and that was clear this weekend. There were no issues with the car and none of the three of us made a driver error. I think that is the key to succeeding in LMP2 as the smallest trouble forces you to push to get back in the race. We are a very close-knit family with an excellent team spirit. It is an important aspect and it makes us twice as happy today. Nico and André did an incredible job, as did the entire team. We were inspired by the huge support from the fans and media for Alpine and its team that had two French drivers. I want to give a shout out to Jota. They have been outstanding adversaries during this fantastic season. Their speed pushed us to progress and raise our game and it was an honour to battle against them! "