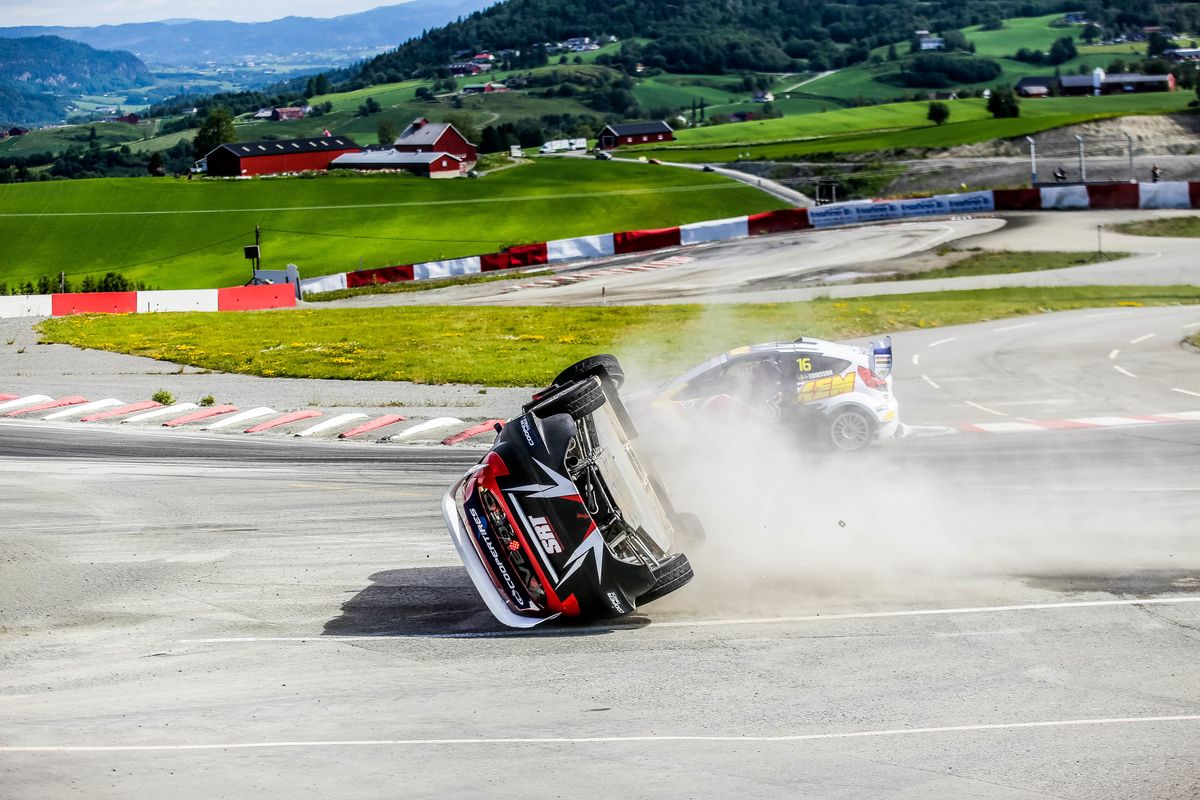 Oliver Eriksson continued to set the pace in the 2019 RX2 International Series presented by Cooper Tires as it made its annual visit to Hell in Norway this weekend (15/16 June), with the championship leader narrowly defeating home hero Ben-Philip Gundersen to seal a fourth consecutive triumph.

By his own high standards, Eriksson made a slow start in Hell – ‘only’ placing second in the first qualifying round – but from that stage on, the defending title-holder was never headed, winning every remaining qualifier, his semi-final and the final. The Swede might have been feeling somewhat under the weather today, but it failed to slow him down and the result means he has dropped just a single point from four events this year – an ominous statistic indeed.

Second-placed Gundersen sent the partisan crowd away happy by securing his best result of what has been a topsy-turvy season to-date, while Jesse Kallio maintained his unbroken run of podium finishes in the official FIA World Rallycross Championship feeder series in third, back at the scene of his victory in EuroRX’s Super1600 class last year.

Eriksson dominated the qualifying stages in Hell, taking three fastest times out of four to top the intermediate standings. The man that pipped him to P1 in Q1 was local favourite Gundersen, who got his weekend off to the perfect start around a track that has not always been kind to him, but thereafter the JC Raceteknik man had to give best to his Olsbergs MSE rival.

On his Hell debut, Fraser McConnell was impressively never outside the top four throughout the qualifiers, shadowing Eriksson to the chequered flag in Q4 as he rapidly got to grips with the demanding Lånkebanen circuit. The Jamaican placed third overall ahead of fellow OMSE ace Kallio, who couldn’t quite find the ultimate pace to challenge his two team-mates.

Marcus Höglund was a fast and feisty fifth on his seasonal RX2 bow with Team Färén, followed by JC Raceteknik’s Jimmie Walfridson, the Swede returning to action after missing the previous round at Silverstone. SET Promotion teenager Sami-Matti Trogen battled back from a troubled start to vault up to seventh with a rapid run in Q4, with Steve Volders in eighth – the reigning EuroRX TouringCar champion increasingly finding his feet in RX2 – and Simon Olofsson
surviving a few ragged moments on his way to ninth.

Norway’s Morten Asklund had to overcome a degree of adversity to secure his own place in the semi-finals, while countryman Petter Leirhol and Sweden’s Anders Michalak – who collided at the start of Q4, leaving the former nursing a damaged car and putting the latter out on the spot – both similarly made the cut.

On his most competitive weekend to-date in the series, Albert Llovera narrowly fell short, as did Vasiliy Gryazin, the Sports Racing Technologies star twice finding himself pitched out of contention at the first corner – once into a spin, and once into a spectacular roll.

Eriksson led the first of the two semi-finals from lights-to-flag, with McConnell’s early joker paying off as the Jamaican slotted into second – but behind, all eyes were on the duel for third between Höglund and Trogen. The Finn’s efforts to get past culminated in contact into the downhill left-hander after the joker, sending bodywork flying. While Höglund held on to clinch the remaining final slot, Trogen was subsequently disqualified, promoting Olofsson to fourth and Asklund to fifth.

The second semi-final was a calmer affair, as Gundersen controlled the pace throughout, with Kallio copying team-mate McConnell’s early joker tactic to secure second and Volders reaching the final for the first time in his fledgling RX2 career at a track where he had previously finished on the podium in TouringCar. Walfridson, Michalak and Leirhol completed the finishers a little further back.

Eriksson converted pole position into the lead when the lights changed as Gundersen tucked into second, with Kallio darting for the joker. A late decision by McConnell to follow suit, however, cost the Jamaican time – and with it, arguably, a shot at the podium.

There was brief drama when Eriksson tapped the wall towards the end of the opening lap, but the Swede escaped without damage and thereafter went on to pull away from his pursuers, ultimately taking the chequered flag just over two seconds clear of Gundersen, who himself had seven tenths in-hand over Kallio. Höglund gave Team Färén its best result of the season to-date in fourth, ahead of Volders and the frustrated McConnell.

Following a three-week break, the RX2 campaign will resume at Höljes on 6/7 July, with a bumper grid anticipated for the ‘Magic Weekend’ at the iconic Swedish circuit.

Oliver Eriksson (1st): “Four from four – I can’t complain about that! It’s been a tough weekend – the competition was really tight with a lot of drivers showing strong pace and I wasn’t feeling on top form today, but when you’re in the car, the adrenaline takes over and you just get on with the job. Ben-Philip certainly didn’t give me much room to breathe and he obviously had the home crowd behind him, but thankfully I was able to repel his attacks. I had a minor scare early on in the final, but as soon as I got to the next corner I could feel the car was ok, so I was able to press on. It’s been a great start to the season, but we all know how quickly things can turn around in rallycross so we just need to go with the flow. Next up is my home event at Höljes, which I’m really looking forward to as I’m sure I’ll have a lot of family and friends coming along to support me – so let’s see if we can keep this momentum going there!”

Ben-Philip Gundersen (2nd): “I’m definitely happy with second place. Right from free practice, we had strong speed and the car felt good, and I immediately felt much more comfortable here than I ever had before. I haven’t always got on that well with this track in the past, but we made the perfect start in Q1. There’s definitely extra motivation when you compete on home soil, and the fans really got behind me, which was great to see – I want to thank them for all their support over the weekend. After such an up-and-down start to the season and losing so many potential points, we can’t afford to leave anything on the table now – we have to push flat-out every time. With that in mind, it was great to be back on the podium again and get the chance to spray some champagne, and we’ve moved up a couple of spots in the championship too. All-in-all, it’s been a very good weekend.”

Jesse Kallio (3rd): “I love this place; it’s one of my favourite tracks in the world – real old-school and a proper rallycross circuit with all the elevation change, and it generates a lot of sideways slides, which the fans always appreciate. I came here with good memories from last year, and in Q1, I think I was driving like I was still in a two wheel-drive car. I seemed to find myself repeatedly in the wrong place at the wrong time and stuck in traffic in the qualifying races, and it wasn’t until the final that I actually got some clean air at last. I expected Gundersen to take the joker at the start and was surprised when he didn’t – that opened up a gap for me, and then I pushed as hard as I could to see if I could catch Ben-Philip. Ultimately, we couldn’t quite make it but on what was unquestionably my toughest weekend yet in RX2, I can’t be unhappy with third place and another podium finish.”

Andreas Eriksson, RX2 International Series presented by Cooper Tires CEO: “’Hell is like Heaven when you love rallycross’ is what they say around here, and that was certainly the case this weekend, with some brilliant – not to mention dramatic – racing from our RX2 drivers. Hell is one of the world’s classic rallycross tracks and a true test of not only skill behind the wheel but also tactical intelligence, with the timing of the joker playing a real role in the end result. Congratulations to our three podium-finishers – to Oliver for maintaining his perfect record this year, to Ben-Philip for bouncing back so quickly from his Silverstone disappointment and to Jesse for continuing to underline his credentials as one of the sport’s fastest-rising stars. Now we all look forward to the ‘mecca’ of rallycross – Höljes – and the famous ‘Magic Weekend’.”