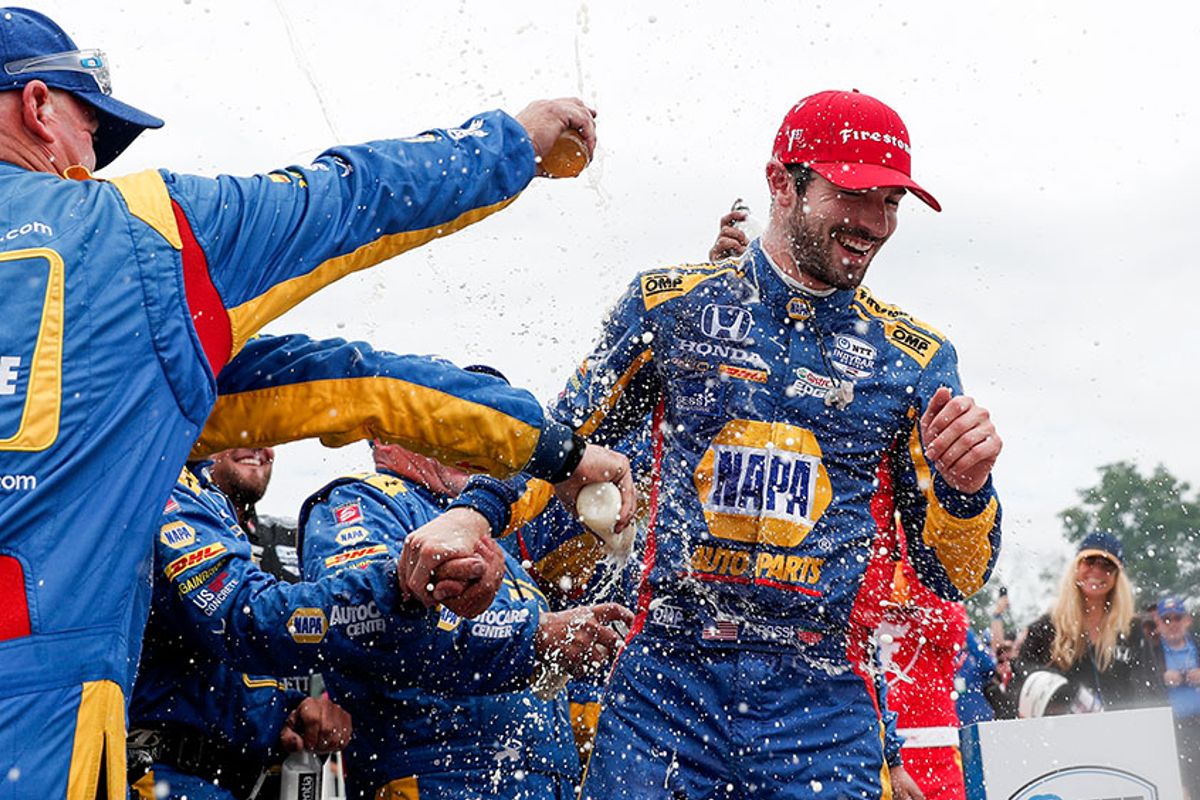 For Alexander Rossi, an utterly dominant drive to victory in the REV Group Grand Prix presented by AMR was just the tonic he needed.
The Andretti Autosport driver led every lap but one Sunday on Road America's demanding, high-speed permanent road course, winning by 28.4391 seconds over Will Power. It gave Rossi a second victory in the 2019 NTT IndyCar Series season and the seventh of his four-year career. More importantly, it closed the 27-year-old Californian within seven points of the championship lead with seven races remaining.

"It was probably one of the best race cars I've ever had," Rossi said of his No. 27 NAPA AUTO PARTS Honda.

"We have been quick through the whole season, but we just haven't really had it come our way as many times as we want, for one reason or another. ... To come out and be able to do what we did today is a huge testament to the whole organization."

Starting second, Rossi passed pole sitter Colton Herta on the first of 55 laps around the 14-turn, 4.014-mile circuit and was never challenged. The only lap Rossi didn't lead came on the last of his three pit stops in the caution-free race. He returned to the top of the leaderboard when Graham Rahal made his last stop a lap later.

Rossi is on a run of five finishes of first or second place in the past seven races, beginning with a victory at the Acura Grand Prix of Long Beach in April. He's as close to the championship lead now as he has been all season. Team Penske's Josef Newgarden, who finished third Sunday, has 402 points to Rossi's 395.

"Obviously you don't want to complain about getting second places because they're good results," said Rossi, who had three runner-up results in the previous four races. "But it was just a win that we needed to do. We've been there and thereabouts, but the Penske cars were getting the upper hand on us. To be able to go out and win a race the way we did and state our intentions, we'll regroup the next couple of weeks and come hard again in Toronto."

Power started third in the No. 12 Verizon Team Penske Chevrolet, moved up a position through the first round of pit stops and remained there to log his best finish of the 2019 season. Newgarden, in the No. 2 REV Group Team Penske Chevrolet, followed a similar path to his teammate - starting fourth, advancing to third on the first round of stops and holding steady the rest of the race.

The third-place finish was Newgarden's sixth podium result of the season - including a series-leading three victories - but the Tennessean admitted he and Power couldn't match Rossi on this day.

"We obviously didn't have enough today," Newgarden said. "We were a little shy; probably a lot shy, actually.

"Alex and Andretti (Autosport), they were too good for us today. We've got to come back to the drawing board, try to figure out what we're missing. I have confidence we'll do that."

Rahal finished fourth in the No. 15 Gehl/Manitou Honda. Reigning NTT IndyCar Series champion Scott Dixon recovered from first-lap contact with Ryan Hunter-Reay that dropped him to last place in the 23-car field to finish fifth.

"I think had we not had that issue at the start getting turned around and losing 10 or so seconds, we may have been fighting for the podium today with the PNC Bank car," Dixon said. "We had to kind of work our way back to the front all day. It is what it is, though. It happened and all you can do is put your head down and start to gain back that time."

The next NTT IndyCar Series race is the Honda Indy Toronto on the streets of Exhibition Place. The race airs live at 3 p.m. ET Sunday, July 14 on NBCSN and the Advance Auto Parts INDYCAR Radio Network.

Kyle Kirkwood (RP Motorsport USA) extended his winning streak at Road America to four - from just four starts - with Sunday's Indy Pro 2000 Championship victory. It gave Kirkwood a weekend sweep of the Indy Pro 2000 races and, coupled with his sweep last year in the Cooper Tires USF2000 Championship weekend, made the Floridian a perfect 4-for-4 in races at Road America.

Points leader Braden Eves (Cape Motorsports) returned to the top step of the USF2000 podium after a dominating drive in Sunday's second race of the Road America weekend. Eves took the lead from pole sitter Hunter McElrea (Pabst Racing) on the second lap and pulled away to win by 4.4508 seconds.

ELKHART LAKE, Wisconsin - Results Sunday of the REV Group Grand Prix presented by AMR NTT IndyCar Series event on the 4.014-mile Road America, with order of finish, starting position in parentheses, driver, engine, laps completed and reason out (if any):