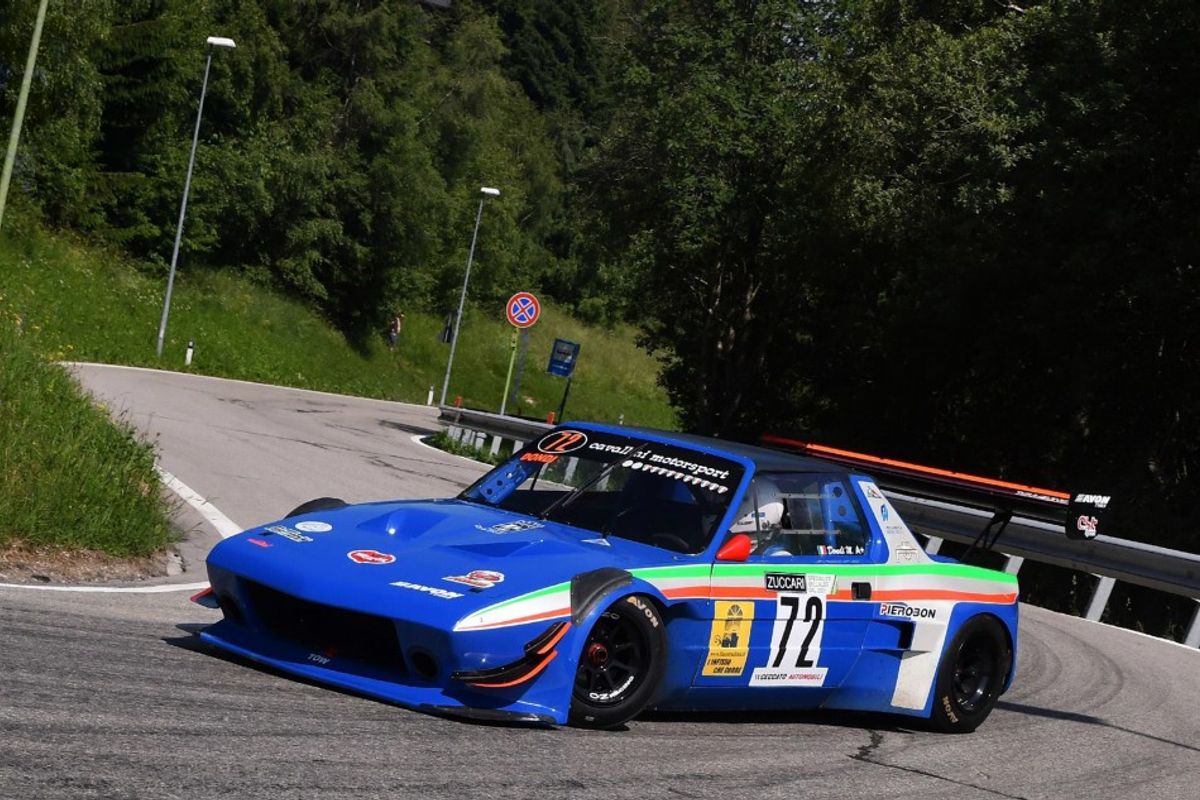 An incredible race, with impressive results: the weather conditions wreaked havoc at Trento-Bondone, so much so that the first two runner-up spots were won by closed cars!

The race’s 17 torturous kilometres are already a great challenge for those who dare to confront it under “normal conditions”, so you can just imagine, if on top of that, the weather decides to take a turn for the worse just as you begin your run! Not all drivers had to attack the Monte Bondone climb during or after the storm, rain and hail, and that in part explains the extremely unusual outcome of the final overall classification. With 270 cars entered, the competition of course took most of Sunday, meaning that competitors had to brave the vagaries of the weather.

The closed car drivers enjoyed dry road conditions and could therefore drive freely, without having to anticipate variations in grip.

Light, nimble and compact, Manuel Dondi’s Fiat X1/9 Silhouette was in its element on the narrow and very windy road from Montevideo to the summit of Monte Bondone, in Vason. Masterfully driven by a driver who was on form that day, the little Fiat not only won Group E2-SH and broke the record, but also – most importantly – created a stir by placing second in the overall classification, which included all cars. Dondi achieved this before the skies opened, while the single-seaters and prototypes awaited their turn and the start signal, at the foot of the mountain.

In addition to wanting to win this prestigious Italian classic race (whose first edition was back in 1925), Simone Faggioli and Christian Merli were dreaming of being the first to break the nine-minute barrier in the history of the race. The difficult weather conditions got in their way. Greatly assisted by his wet tyres, Faggioli (Norma M20FC Zytek) was the only one to get under 10 minutes that day, adding his name to the list of winners of the Trento-Bondone for the tenth time! Christian Merli however, who started the race on intermediate tyres, had more trouble controlling his Osella on the soaking wet road. Coming in seventh, Merli was still able to avoid disaster at the Championship, taking in extremis the 25 first-place points awarded to the top driver of Group E2-SS. A tiny advantage of 17 hundredths of a second put him ahead of the Austrian Christoph Lampert.

Now at the wheel of a Norma with a 3-litre engine, which he has regularly raced in during the Italian Championship season, Denny Zardo demonstrated great control, earning him second place in Group E2-SC. A native of the Trentino region, Thomas Pichler (Ligier JS51 Honda) successfully tested himself in hill climb, after a distinguished international career in Karting and participation in Formula Renault and GT circuit racing. He won Group CN, with a comfortable lead ahead of the European Championship regulars, which included Sébastien Petit (Norma M20FC Honda) and Marco Capucci (Osella PA21 Evo Honda).

While Dondi made an impression with his stunning performance at the wheel of his Fiat, the first two GT3s – understandably harder to manoeuvre around the twisty turns and through the villages that characterise the course – finished in third and fourth place overall.  Giuseppe Ghezzi, in his Porsche 997 GT3-R, was only two and a half seconds ahead of Luigi Perrugini in his Lamborghini Huracan.

The Czech Dan Michl (Lotus Elise V8), sixth in the overall classification, placed second in the Silhouette Group, ahead of the Romanian Horatiu Ionescu’s Ferrari 458 Challenge.

There are two more competition events this month, first in Dobšiná, Slovakia (21-22 July) and then in Limanowa, Poland (28-29 July).