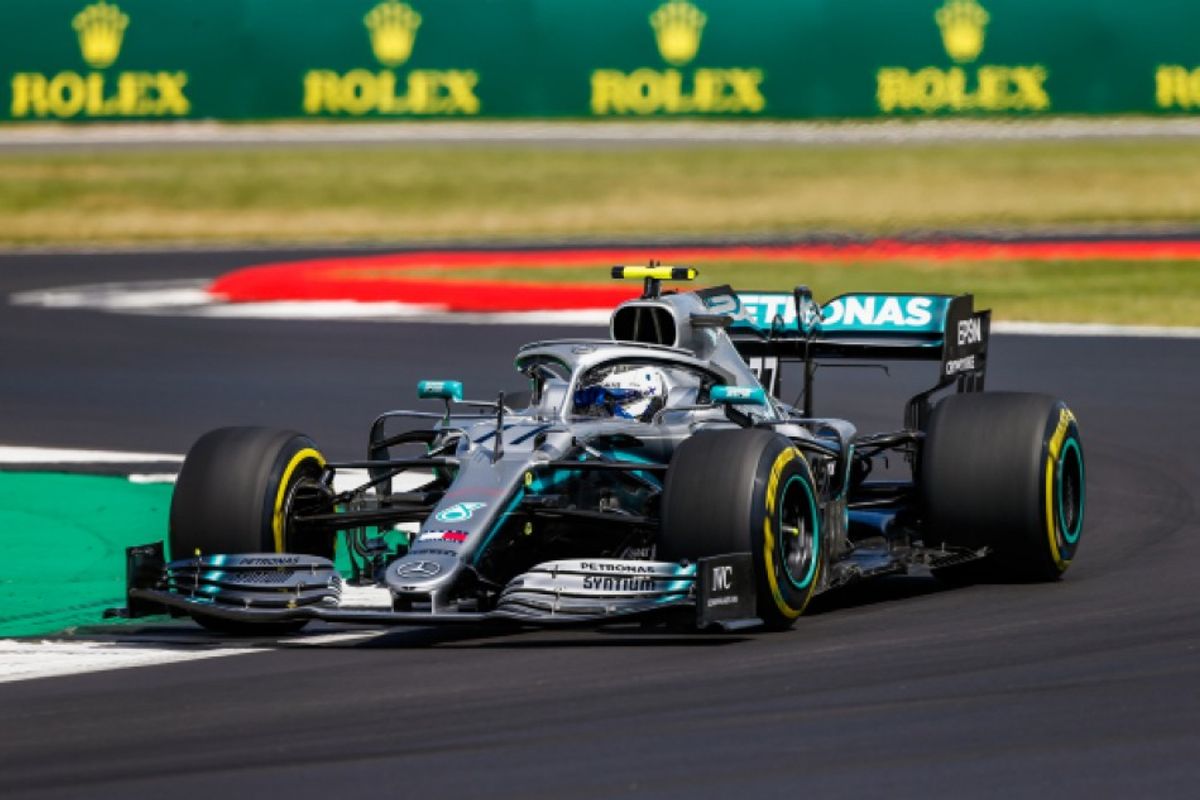 In a tight qualifying session at Silverstone, Valtteri Bottas beat home favourite Lewis Hamilton by just six thousandths of a second to claim pole position for the British Grand Prix as Mercedes locked out the front row for the seventh time in 10 races. Ferrari’s Charles Leclerc took third place ahead of the Red Bull of Max Verstappen.

In the opening qualifying segment Hamilton took an early lead, posting a time of 1:25.513 to take P1 two hundredths of a second clear of Leclerc. Behind them Verstappen slotted into an eventual P3 with a lap of 1:25.700.

Bottas, meanwhile, eased through to Q2 in P4 ahead of the second Ferrari of Sebastian Vettel and McLaren rookie Lando Norris.

Further down the order, the tussle for the final spot in Q2 was tight. In the end Racing Point’s Sergio Pérez did just enough to claim P15 and passage to the next segment with a time of 1:26.649, just 0.013s ahead of Haas’ Kevin Magnussen who was eliminated in P16 ahead of Toro Rosso’s Daniil Kvyat, Racing Point’s Lance Stroll and the twin Williams cars of George Russell and Robert Kubica.

In Q2, both Mercedes drivers went out for first runs on medium compound tyres, as did Red Bull drivers Verstappen and Pierre Gasly, and Ferrari’s Leclerc. Vettel, however, went a different route, with the German starting the session on soft compound tyres. And while Leclerc set the pace on the yellow tyres with a time of 1:25.646, taking P1 ahead of Bottas, Hamilton, Verstappen and Gasly, Vettel’s lap on the red-banded compound was poor and after the first runs he found himself in P8, behind Daniel Ricciardo and Lando Norris.

In the final runs the top five all went out again, but while Mercedes and Red Bull backed out of improvements on soft tyres to ensure they will start on the more durable medium compound, Leclerc went quicker on the red-walled compound to take P1 with a time of 1:25.546.

Vettel, meanwhile, dropped to P11 as rivals improved, but he too made an improvement in the final run and his time of 1:26.023 was good enough to take P5, splitting the Red Bulls. Ferrari will thus start on soft tyres.

Eliminated at the end of the session were the Alfa Romeos of Antonio Giovinazzi and Kimi Räikkönen in P11 and P12 respectively, 13th-placed Carlos Sainz of McLaren, Haas’ Romain Grosjean and Racing Point’s Pérez.

In Q3 it was Bottas who seized the initiative and the Finn posted a good lap of 1:25.093 to claim provisional pole 0.252s ahead of Hamilton, with Verstappen a tenth further back. Leclerc was fourth, with Gasly fifth.

And there was to be no denying Bottas a tenth career pole. The Finn failed to improve on his final flyer and that gave Hamilton an opportunity, and though the home favourite put in a good lap, he ended up missing out on pole by the tiny margin of seven thousandths of a second. Leclerc jumped Verstappen in the final run to claim third while Gasly held fifth, two tenths ahead of Vettel.

Behind them Renault’s Daniel Ricciardo finished seventh ahead of Norris, Albon and Hulkenberg.