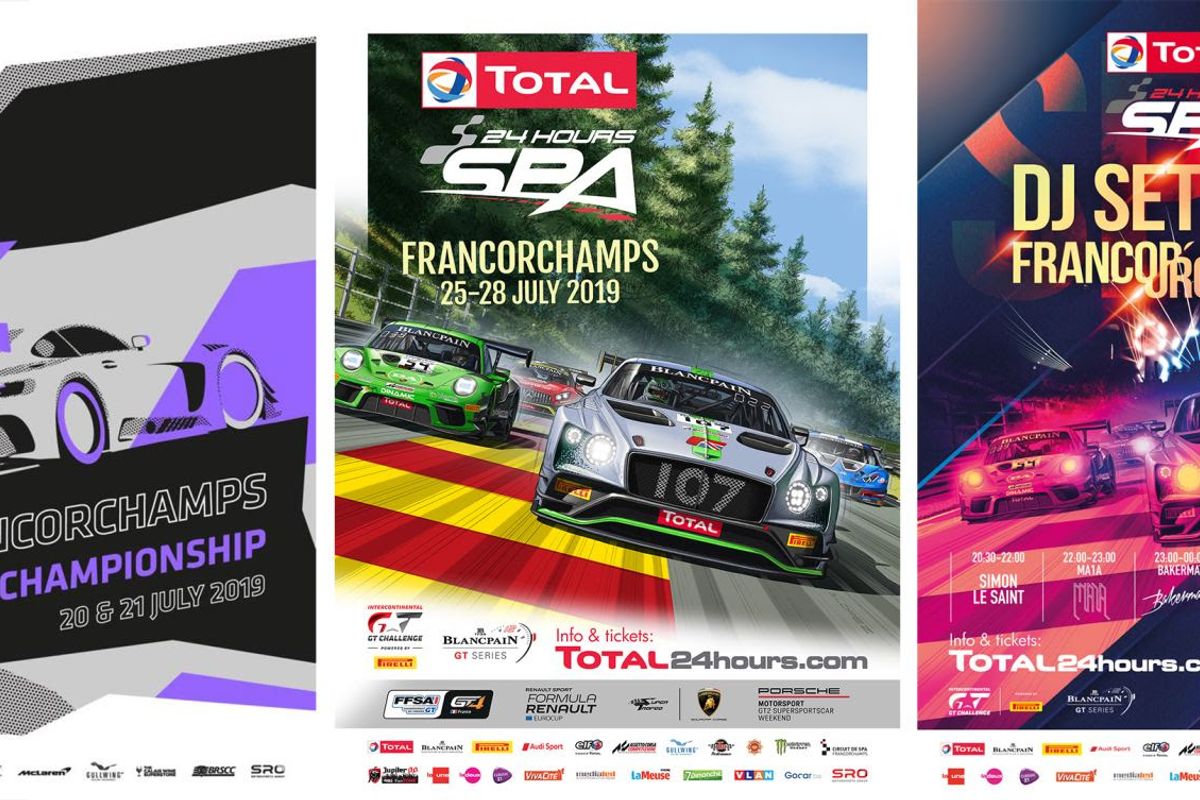 This season's Total 24 Hours of Spa will be bigger and better than ever, with a field of 73 cars establishing a new record for the event's GT era. It is not simply a matter of quantity: as the marquee race for both the Blancpain GT Series and the Intercontinental GT Challenge Powered by Pirelli, some of the world's leading teams and drivers will challenge for the top step of the podium at the iconic Belgian circuit.

But while the 24 Hours represents the headline event, it is by no means the only show in town. Indeed, a wealth of activities will be on offer over a period of 10 days as the Ardennes venue stages its annual festival of motorsport and family entertainment.

Between the 24 Hours itself and a host of other top-end series, more than 20 races will be staged between Friday 19 July and Sunday 28 July. What's more, Spa's long-standing commitment to providing fun for the whole family will ensure that there is never a quiet moment.

The on-track activity kicks off with SRO Spa Speedweek, which returns after making a successful debut as part of last year's 70th-edition Total 24 Hours of Spa celebrations. Taking place at the iconic venue over the weekend of 19-21 July, one week before the start of the Belgian endurance classic, this year's Speedweek will once again feature the roar of GT3 machinery thanks to Blancpain GT Sports Club and the British GT Championship.

There will be further support events from the BRDC British F3 Championship, as well as a pair of different Caterham categories to keep tabs on. Best of all, the entire Speedweek programme – from the first practice session on Friday through all nine races staged during the weekend – is completely free, giving every fan the opportunity to experience motorsport at the world-renowned Spa-Francorchamps circuit.

BRINGING THE ARDENNES TO LIFE

As ever, the entertainment at Spa will not be limited to the drivers competing in the 24 Hours or its support events.

In fact, throughout Monday 22 July the Spa-Francorchamps circuit will be opened up to give the public a unique opportunity to drive the world-famous track in their own car. While the teams participating in the Total 24 Hours of Spa are setting up for the main event, a trackday will be organised in collaboration with three-time race winner Marc Duez.

Several programmes are offered and, for those who do not wish to drive their own vehicle, Racing Taxi laps will also be available. This represents a return for the popular trackday concept, which debuted last year as part of the event's 70th-edition celebrations.

Wednesday afternoon will see one of the great Spa traditions, with the always-impressive parade of racing cars to the centre of Spa town and back. After spending more than three hours on the local streets – during which the drivers will participate in a huge autograph session, tackle interviews and undertake their mandatory briefing – the world’s finest GT3, GT2 and GT4 cars will return to the circuit to prepare for the biggest race of the season.

There will also be a number of incredible machines in the paddock throughout race week, with Audi, Aston Martin, Ferrari, Mercedes-AMG, Lexus, Porsche, Lamborghini and Nissan among the marques with cars on show. What's more, Bentley will celebrate its centenary in style with by showing off some of the most beautiful models from its 100-year history.

Located at the bottom of Raidillon, the Fan Zone will be the epicentre of off-track entertainment throughout the weekend, offering activities for the whole family. Simulators, racing cars, food and drink stands, official merchandising shops – you can find it all in the Fan Zone.

The entertainment does not stop when the 24 Hours begins. Indeed, once the race is underway, Fred Crosset’s Circus Trial Tour will treat fans to an acrobatic performance that hardly seems possible. The annual concert will start at 20.30 with a set by Simon Le Saint. The Mexico-born Belgian is no stranger to the Total 24 Hours of Spa and is back once again to launch 2019 in style.

At 22.00 fans will enjoy the first of two sets by French electro producer and DJ Ma1a, an artist beloved by electro aficionados and newcomers to the genre alike. He will be followed by Bakermat at 23.00. At midnight, as the race closes on one-third distance, Lucas & Steve will hit the stage to take fans into Sunday.

Finally, at 01.00, official Monster Energy DJ Ma1a will return to the stage to close proceedings with his headline act. And don't forget: entrance to the concert is included in the price of a general admission ticket for the full weekend.

2019 represents the start of a new era as the SRO E-Sport GT Series stages its first season. Launched at Monza, the competition gives fans and pro gamers alike a virtual championship in which to compete using Assetto Corsa Competizione, the official video game of the Blancpain GT Series.

The Total 24 Hours of Spa will play host to the third round of the season and will see invitational drivers compete in a dedicated Sim Racing Arena at the circuit. They will be challenged by online qualifiers (Silver Class) and on-site drivers, selected on Friday and Saturday (Am Class). Winners from the Spa contest will progress to a grand finale, which takes place alongside the closing round of the Blancpain GT Series at Circuit de Barcelona-Catalunya.

SRO Motorsports Group has joined with developer Kunos Simulazioni and publisher 505 Games to organise the new initiative, which also relies on the support of Pirelli and AK Informatica. It forms part of a diverse range of entertainment that ensures there will be something for everyone to enjoy during this year’s Total 24 Hours of Spa.

As ever, the main source of action in the Ardennes will be found on the iconic 7km Spa-Francorchamps circuit. It begins on the afternoon of Tuesday 23 July with the annual three-hour Bronze Test, before a pause on Wednesday to undertake the parade.

Thursday sees the first competitive sessions for the Total 24 Hours of Spa, with free practice and qualifying getting underway. This year's event also features a number of high-level support series, including the new and improved Formula Renault Eurocup, Lamborghini Super Trofeo, and an impressive 50-car field for Championnat de France FFSA GT. What's more, the new GT2 concept will launch with a one-make race at Spa for a full field of Porsche GT2 RS Clubsport machines.

On Thursday, fans will also enjoy an unmissable opportunity to visit the pit lane after dark. This new initiative will begin after the qualifying and night practice sessions have finished at around 23.20. Once the cars are back in their garages, the pit lane will be opened up to the fans, giving them a chance to admire the contenders for this year's Total 24 Hours of Spa while the mechanics carry out their checks.

Friday promises plenty of entertainment as well. Shortly after the Super Pole shootout (19.40), a track walk will be organised. Open to anyone holding a general admission ticket, fans will have the chance to walk the entirety of the iconic 7km circuit or tackle it on a bicycle.

Following further support action on Saturday morning, the 2019 Total 24 Hours of Spa will get underway on Saturday at 16.30. After a full day and night of racing the winners will take the chequered flag at 16.30 on Sunday, bringing the curtain down on an incredible 10 days in the Ardennes.

So what are you waiting for? Clear your diary from 19-28 July and join in the festivities with the SRO Spa Speedweek and a record-breaking Total 24 Hours of Spa.