The Fastnet: Hot Prospects in the big boat divisions 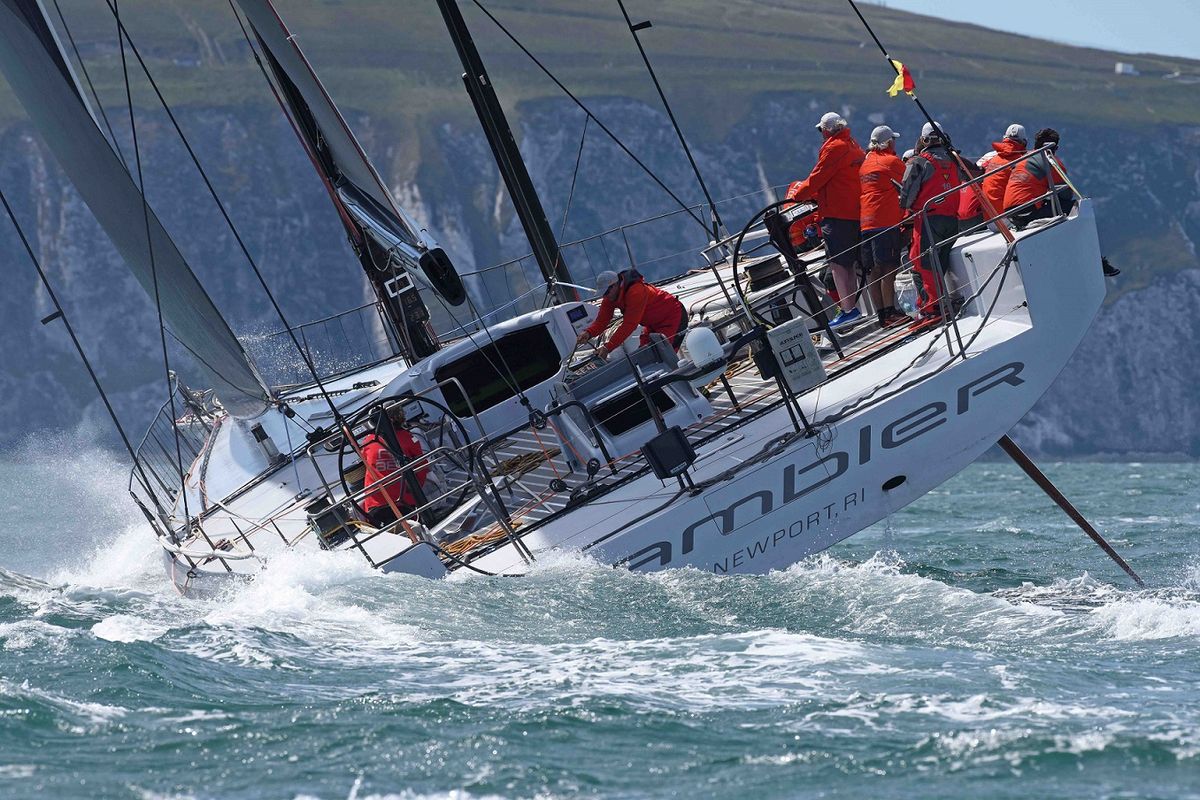 Andy Rice reviews the competition in classes IRC Zero, One and Two

The weather will play a significant outcome in determining the overall results of the Rolex Fastnet Race. Winning your division is more within each team's control, and here we'll look at the top three IRC handicap categories in terms of size and speed.

IRC Zero is where the biggest boats congregate and is likely to produce the monohull line honours winner. However, you have to go back to the 2009 and 2011 editions of the race to find the last Maxi to win overall - on both occasions the impeccably sailed Rán 2.

IRC One produced the last edition's winner in 2017, and Lann Ael 2 is back to defend her title, although victory in this hard-fought division will be no picnic for the French crew. IRC Two is also capable of delivering an overall winner, and it is here where the 2015 winner Géry Trentesaux is returning with his new boat, Courrier Recommandé.

Let's take a look at some of the runners and riders, and speculate on who might emerge victorious in 2019.

IRC Zero
The biggest boat in IRC Zero is the 100-footer Sun Hung Kai/Scallywag 100, owned by Seng Huang Lee from Hong Kong. The international crew is led by experienced Australian sailor David Witt, former 18ft skiff sailor and skipper of the Scallywag team in last year's Volvo Ocean Race. She will be relying on a windy start and light airs conclusion to have a chance at winning on handicap.

Closest rival in terms of speed through the water is Rambler 88, George David's canting-keeled sloop from New York. The 88-footer has clocked up some impressive results which include overall winner of Les Voiles de St Barth, line honours winner of the RORC Caribbean 600 and the Rolex Middle Sea Race, as well as third on the water in the Rolex Sydney Hobart. Rambler 88 also took monohull line honours in the 2017 Rolex Fastnet Race, so has the raw speed, thanks to an experienced crew that numbers many of the America's Cup winning Alinghi crew in its ranks, not least former Alinghi skipper Brad Butterworth. This will be David's fifth time of competing, and the ambitious owner still hankers for the overall win;

"Too often we have been bridesmaid, which could be what brings us back - along with the great traditions and scenery of this classic race."

Expect to see a tough battle between the Maxi 72s Lucky and Sorcha (formerly the two-time Fastnet winner Rán 2) along with Jethou which was extended over the winter from a 72-footer to 77ft. Lucky was previously the Maxi 72 World Champion Bella Mente now in the hands of American owner Bryon Ehrhart, following in the footsteps of his 63ft Reichel Pugh design and before that the TP52 in which he scored a series of strong results. Lucky has already demonstrated her class with some strong performances in the Mediterranean including Capri Sailing Week, the Rolex Giraglia Race, Palermo to Monaco and the Maxi Worlds. Ehrhart has twice competed in the Fastnet, so knows some of the pitfalls along the way, not least from running aground on the Shingles bank not long after the 2015 start, which forced his RP63 out of the race. No wonder then that Ehrhart identifies the start as one of the most critical parts of the course, where he believes the key to success will be "picking lanes through smaller, slower boats in restricted waters. We'll aim to sail safe, sail hard and sail fast."

Quite a few ex-Volvo Ocean Race boats show up in this division, with Volvo 60s, 65s and 70s all hoping for some fast downwind sailing to make the most of their round-the-world design pedigree. Perhaps the most competitive of these is the VO70 Wizard, formerly Franck Cammas' 2011-12 Volvo Ocean Race winner Groupama 4, now owned by Baltimore brothers, David and Peter Askew. Recent winner of the Transatlantic Race 2019, Wizard keeps on clocking up significant victories, notably the RORC Caribbean 600, Chicago Mackinac, Bayview Mackinac and Newport - Bermuda Race, along with a class win at the Rolex Sydney Hobart Race. Not so surprising when you learn that the team includes a couple of Volvo Ocean Race veterans - former winner Rob Greenhalgh from the UK, two-time skipper Charlie Enright of the USA and Australian navigator Will Oxley.

Further down the size range are a bunch of competitive 50-something-footers, including David Collins' Botin IRC52 Tala (formerly Interlodge and Spookie) which recently claimed line honours victory in the Royal Ocean Racing Club's Myth of Malham race. Tala will enjoy a good battle with Outsider, a purpose-built offshore TP52. Expect a tight fight between five Cookson 50s, including the Italian team Endlessgame owned by Pietro Moschini, which includes past America's Cup helmsman Paolo Cian in the crew. Watch out for Ron O'Hanley's Privateer as the pick of the bunch after finishing runner-up to Lann Ael 2 in the overall standings for the 2017 Rolex Fastnet Race.

A couple of other boats in this size range are Oystercatcher XXXIII, owned by east-coast racing veteran, Richard Matthews, who this year will be celebrating his 23rd Fastnet Race, and exactly 50 years since he and fellow crew member, Alan Brooke, first raced around the lighthouse. Oystercatcher XXXIII is a Ker 51 which was previously campaigned by Dutch race veteran Piet Vroon, best known for his series of Tonnerre yachts. Among the crew is the 470 Olympic Champion from Rio 2016, Saskia Clark, who hails from the same part of the country as Matthews.

Teasing Machine is a NMYD 54 which has recently completed the slowest ever Transatlantic Race, after which 600 miles of Fastnet racing will seem but a sprint. Eric de Turckheim is the French owner of a boat which was designed specifically with distance races in mind. Teasing Machine has already proven her pedigree with third overall in the 2017 Rolex Middle Sea Race, winning the 2017 RORC Transatlantic Race and the 2018 Atlantic Anniversary Regatta. De Turckheim has similarly impressive results in his previous Fastnets, 2nd in IRC2 in 2013 and 3rd in IRC1 in 2015. The crew are a mix of amateurs and professionals, including some Volvo Ocean Race veterans, led by Laurent Pages.

IRC One
As outright winner of the last Fastnet Race in 2017, Lann Ael 2 must be considered a hot favourite to win IRC One. After Didier Gaudoux skippered the JND 39 to a near-perfect race in 2017, the Frenchman and his mostly Corinthian crew will be hoping for another set of perfect conditions for their yacht. A lifelong sailor who did his first RORC races in 1978, Gaudoux says the yacht was designed with the Fastnet in mind. "You have to be a bit lucky with the weather to win, but I am very proud to have designed a boat with Bernard Nivelt to win the Fastnet."

Philippe Frantz and his NMD 43 Albator will be one of a number to give Lann Ael 2 a run for her money. Launched in 2017, Albator went on to win class in the 2018 RORC Caribbean 600 and the 2018 Rolex Middle Sea Race, where she also finished 3rd overall. This is the first time Frantz has attempted the Fastnet Race and he is wary of the weather, conditions and speed, but is nevertheless focused on the win. The yacht comes well prepared, with a crew comprising a mix of dinghy sailors, a Figaro sailor and previous competitors from the Route du Rhum, America's Cup, Half Ton Cup and Trophée Jules Verne. If anyone could win at his first attempt on the Fastnet, it's Frantz.

If the conditions come right for Raw, one of the new foiling Figaro 3 keelboats, then former Irish Sailor of the Year, Conor Fogerty, could be lighting up the Celtic Sea. Fogerty is intent on an Olympic campaign for the new doublehanded offshore event in Marseille 2024, but is sailing four-up for the Fastnet.

Based on sheer experience in the Fastnet, the crew of Lutine from Gosport must be considered as a contender. Neil Armstrong is skippering the X-55 this year, and he's looking forward to the amateur crew showing what can be achieved with a concerted training programme.

Another crew that never misses a Fastnet is Moana, a First 47.7 skippered by François Goubau who races with his wife and three sons. This will be the Belgian boat's 10th Fastnet Race and one of the three sons, Mathieu, will be steering the boat as he has been since the age of 16; this is his 11th Fastnet yet he's still only 38 years old. Over the years Moana has been a RORC race regular, ranging from the Commodores' Cup (second in 2016) to the IRC Nationals and Cowes Week (class winner) and has taken three podium places in class at the Fastnet.

IRC Two
The most likely winner of IRC Two will be Géry Trentesaux, who won the race in a JPK 10.80 in 2015 and won last year's Rolex Middle Race in his present boat, JPK 11.80 Courrier Recommandé.

Having spotted the success of the JPK designs and Trentesaux in particular, Tom Kneen bought a JPK 11.80 last year with a view to winning the Fastnet Race at his third attempt. From a comedy of errors in his first Fastnet just four years ago, the Plymouth businessman has proven a fast learner with his Sunrise crew. "The biggest challenges are the tides between the Solent and Land's End - we have lots of decisions to make," says Kneen, whose team are almost all RORC Under 35 crew and three of whom are members of the RORC Youth Griffin Committee. Additional expertise comes from the young navigator Tom Cheney who works for INEOS Team UK.

Christian Teichmann and Hugh Brayshaw are racing Abu 43 in the doublehanded fleet but could threaten for a division win. Formerly owned by the Artemis Offshore Academy, Abu 43 is an enhanced Figaro II, optimised for racing under IRC. Teichmann, a German investor, is competing in his first Fastnet while this is Brayshaw's second assault on the Rock. Young, but with a wealth of offshore experience, Brayshaw is optimistic about their chances;

"I think this time racing shorthanded will mean the latter stages of the race could be hard. But last time we rounded the Rock with a clear sunrise and all these boats around us. We are hoping to finish amongst the top of the Figaro IIs, however if conditions are right then we could see ourselves towards the front of our class and two-handed."

Another doublehander worth watching in IRC Two is Ajeto!, a J/122 sailed by joint owner-skippers, Robin Verhoef and John van der Starre from the Netherlands. The engineer and dentist from The Hague have been Dutch IRC champions four times, and were European J/111 champions in 2015 with a previous boat, Xcentric Ripper, with which they won class in the 2015 Fastnet. It's the fourth Fastnet for another J/122, Junique Raymarine Sailing Team, specially adapted for shorthanded sailing and a proven performer in the hands of Chris Revelman and Pascal Bakker who took 3rd in class at the 2018 Round Britain and Ireland race.

The First 40 and First 40.7s will be out in force for IRC Two but whether any can threaten the more optimised boats in this division is another matter. The First 40, Sailplane, is owned by Rob Bottomley and skippered by Nick Martin, and will be hosting Catherine Keohane and her friends and family. It will be Keohane's second Fastnet and this time she is driving a more competitive entry. "We decided to choose the crew and the boat to be more competitive. It is a challenging race attracting a world class fleet from around the world and it gives us a 'kick' to be taking part alongside professional and amateur sailors alike." With seven out of the 10 crew having completed one or more Fastnets, this is an experienced Corinthian crew.