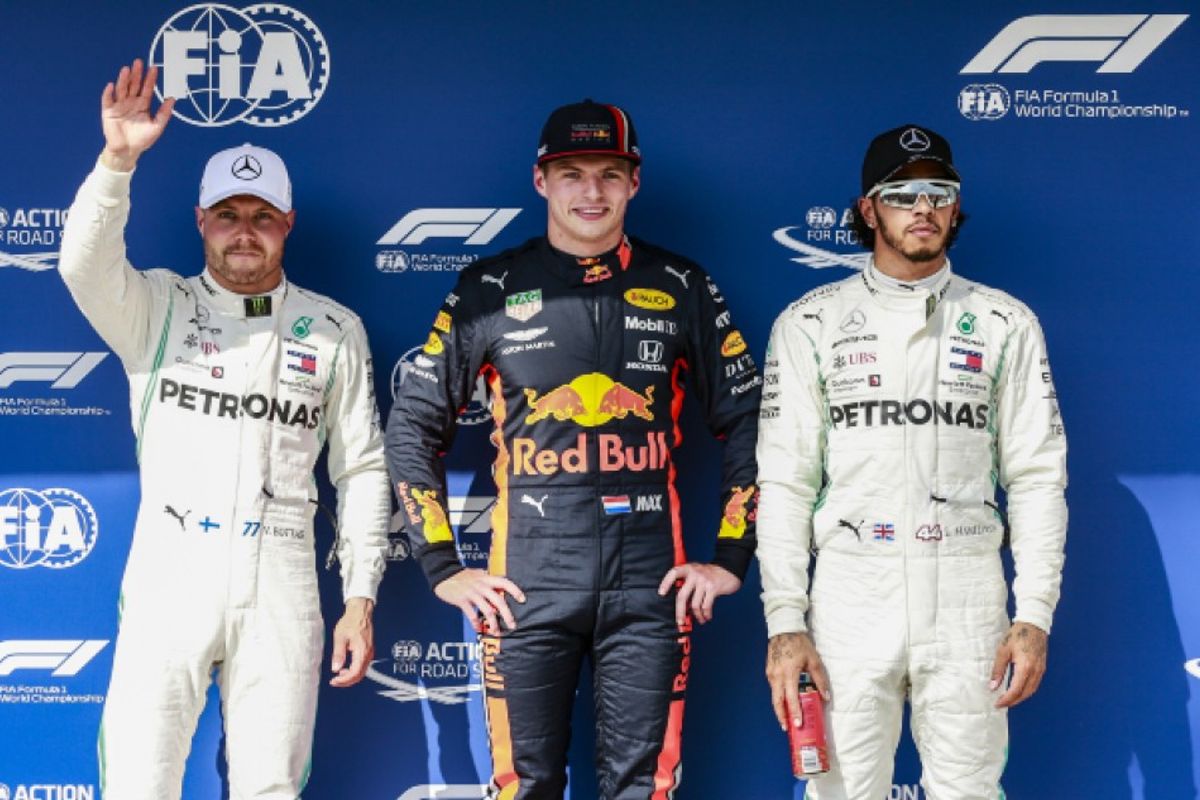 AHEAD OF BOTTAS AND HAMILTON

Max Verstappen scored the first first pole position of his career as he beat Mercedes’ Valtteri Bottas to the front of the Hungarian Grand Prix grid by just under two hundredths of a second. Championship leader Lewis Hamilton with start from third place.

As soon as the lights went green at the end of the pit lane to signal the start of Q1, Red Bull driver Verstappen made a strong statement, with the Dutchman posting a lap of 1:15.917 to top the timesheeet. It was a time none of his rivals could match in this first segment, though Mercedes driver Lewis Hamilton got close with a lap of 1:16.068 to finish second ahead of Bootas and Haas’ Kevin Magnussen.

Fifth and sixth places went to Ferrari drivers Charles Leclerc and Sebastian Vettel. Leclerc hit trouble in this opening phase, however. The Monegasque lost control of his car on entry to the final turn during a flying lap and spun backwards into the barriers. He was able to limp back to the pits where his crew began repairs ahead of Q2.

At the lower end of the order George Russell was the first man eliminated in P16. The Williams driver exited ahead of Racing Point’s Sergio Pérez, Renault’s Daniel Ricciardo, the second Racing Point of Lance Stroll and P20 man Robert Kubica of Williams.

For the top three teams the yellow-banded medium tyre was the compound of choice for the first runs of Q2. Hamilton took top spot with a time of 1:15.548, but Verstappen shadowed him closely with a lap 0.025s off the Mercedes drive’s pace. Bottas was a tenth further back in third place ahead of the Ferraris of Leclerc and Vettel.

In ther final runs of the segment, the drivers at the top of the order went out again on soft tyres, but after posting purple times in the first two sectors Verstappen, Hamilton and Bottas backed out their laps.

With Ferrari running medium tyres throughout Q2, and with Pierre Gasly matching that tactic in the second Red Bull on his way to P9 in Q2, all drivers from the top three teams in the championship with start on the yellow-banded Pirelli compound.

Eliminated at the end of the second segment were 11th-place Nico Hulkenberg of Renault followed by the Toro Rossos of Alex Albon and Daniil Kvyat, Alfa Romeo’s Antonio Giovinazzi and Haas’ Kevin Magnussen.

The final segment saw Max become the first man to dip below 1m15s and the Dutchman claimed provisional pole with a super lap of 1:14.958. That left him 0.178s ahead of Bottas and a hundredth further ahead of Hamilton. And there was no denying Verstappen Max in the final run. Bottas pushed the Dutchman hard, but with a smattering of purple micro-sectors across his lap Max pulled clear of the Finn to beat him to the front of the grid by just under two hundredths of a second.

Hamilton too found a substantial improvement on his final lap but it wasn’t enough to lift him higher than third place, almost two tenths of a second off pole. Fourth place on the grid went to Ferrari’s Charles Leclerc, almost half a second behind Max, with Ferrari team-mate Sebastian Vettel fifth.

Pierre held onto sixth place at the end of qualifying, finishing just over three tenths of a second behind Vettel and improving to a time of 1:15.450.