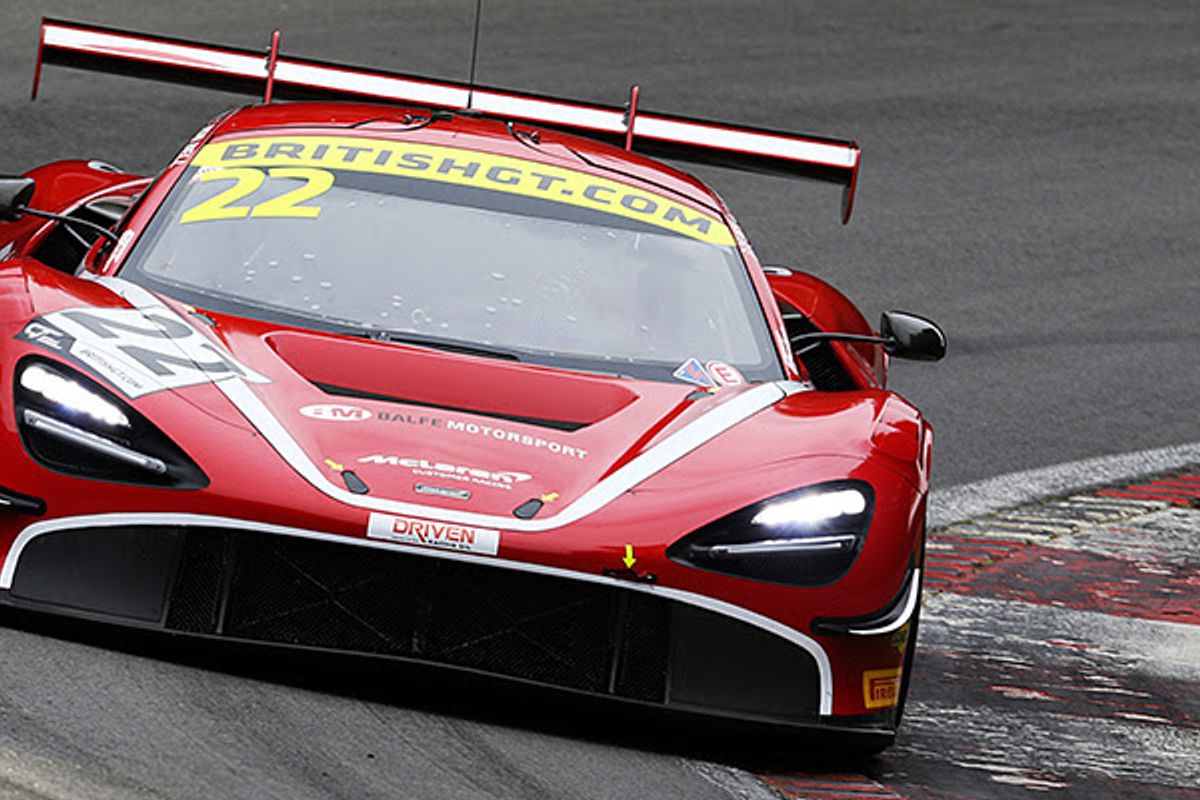 The McLaren 720S GT3 driven by Shaun Balfe and Rob Bell has claimed pole position for the penultimate round of this season’s British GT Championship after topping a fiercely competitive qualifying session at Brands Hatch this afternoon.

A McLaren, albeit of the 570S variety, also starts up front in the GT4 class, where HHC Motorsport’s Callum Pointon and Dean Macdonald topped both sessions. Nevertheless, they were just 0.086s faster in the combined classification than Ash Hand and Tom Canning, who beat the best of the Pro/Am crews – Beechdean AMR’s Kelvin Fletcher and Martin Plowman – to second.

The foundations for the new McLaren's first British pole were laid by Balfe, whose excellent performance in the opening session netted the fourth-best time among his group. Crucially, Balfe emerged as the quickest bronze-graded driver, which handed team-mate Bell an excellent opportunity to make the final push for pole.

Wilkinson was fastest overall in Q1 – a feat he has now achieved at successive British GT events – having narrowly edged out impressive GT3 debutant Angus Fender (Century Motorsport BMW). The youngster hadn't sat in the squad's M6 until last week, but looked every bit at home as he contended with the class leaders.

Ryan Ratcliffe showed no ill effects from his crash at last weekend's 24 Hours of Spa to lap within 0.064s of Wilkinson and complete a trio of Silver Cup runners at the head of the Q1 order. Balfe meanwhile was just 0.066s shy of the Welshman, leaving the top four runners covered by a mere 0.130s at the session's end.

With Balfe having given him the opportunity, Bell duly secured pole. The McLaren ace was only eighth quickest in a hotly-contested Q2 session, but it was enough to seal top spot by 0.133s on combined times.

Ellis bagged second on the grid for the car he shares with Wilkinson, though a 20-second Pitstop Success Penalty for Spa’s race winners leaves the #96 Aston Martin crew with a tough task in tomorrow's race. This will be music to the ears of third-placed Barwell Lamborghini duo De Haan and Cocker, who could seal the title should they clinch victory with other results going their way. They do not face any Success Penalty, though nor for that matter does the pole-sitting McLaren.

The #69 Lamborghini will share the second row with the #47 TF Sport Aston Martin of Jonny Adam and Graham Davidson, with the #9 Century BMW crewed by Fender and Jack Mitchell fifth. Callum Macleod was fastest overall in Q2 and took sixth on the grid for the RAM Racing Mercedes-AMG he shares with Ian Loggie.

From a championship perspective, the ninth-placed starter is particularly significant. Erstwhile points leaders Balon and Keen will roll away from the fifth row of the grid in tomorrow's race, which could become a case of damage limitation as they seek to keep pace with the sister #69 Lamborghini. Given De Haan and Cocker's lofty starting spot, this may not prove an easy task.

While a McLaren also lines up on pole among the GT4 runners, that is where the similarities to the GT3 battle end. For starters, HHC Motorsport secured P1 with a 570S model as opposed to the GT3-topping 720S. What's more, pole was won in a very different manner. Pointon and Macdonald made very sure of that by topping both sessions, with Macdonald emerging as the quicker of this rapid pairing.

Despite this, the gap to second was just 0.086s in the combined classification, with the #97 TF Sport Aston Martin of Ashley Hand and Tom Canning fighting valiantly to depose HHC’s McLaren. Ultimately they came up short by less than a tenth, but a 20-second Success Penalty will make a repeat showing in tomorrow's race a rather more difficult prospect.

Third in GT4 went to the leading Pro/Am contenders, Kelvin Fletcher and Martin Plowman (Beechdean AMR). Their effort was aided significantly by Fletcher's excellent showing in the opening GT4 session, which saw the #11 Aston Martin post the fastest time among the Pro/Am runners. Plowman was on the pace too, ending his session in P2 and just 0.037s shy of Macdonald.

This would prove to be crucial, because the battle for third could hardly have been closer. Just 0.003s separated the #11 Aston from the #4 Tolman Motorsport McLaren of James Dorlin and Josh Smith, the smallest gap between competitors in the entire field. Scott Malvern and Nick Jones completed the top five in their Team Parker Mercedes-AMG, placing the pair second among the Pro/Am challengers. Alongside them, the #75 Optimum Motorsport Aston Martin will complete the front three rows of the GT4 grid.

Further back, it proved to be an unusually trying session for the championship-leading #15 Multimatic Ford shared by Seb Priaulx and Scott Maxwell, who will start tomorrow's race from 10th position. At the tight and twisty Brands Hatch, making progress through such a highly competitive field will be far from simple.

The starting drivers’ minimum stint time has changed for Brands Hatch: GT4 entries are now permitted to stop after 58 minutes while GT3s must run until the 62nd.