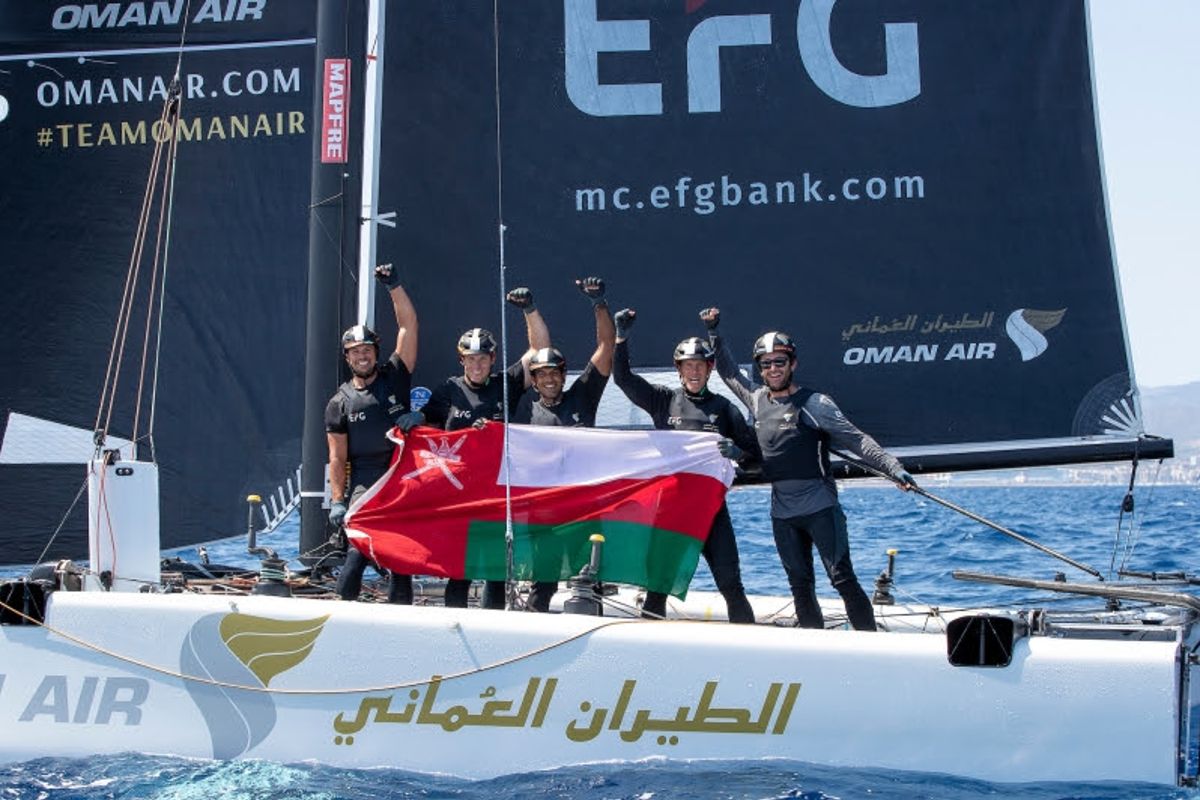 Oman Air have won the 38th Copa del Rey MAPFRE after fending off a final day challenge from arch-rivals Alinghi. After being soundly beaten by Alinghi at the GC32 World Championship in June, this was a sweet return to form for Adam Minoprio and his crew. “Winning here was important to get back the confidence of the team and now I think it brings us just ahead of Alinghi in the overall leaderboard for the season,” said the New Zealand skipper. “It's going to be a very challenging series. We were very disappointed we didn't have to make them work harder for the world title, so it’s good to get one over them here.”

While Alinghi were disappointed to have lost out on this occasion, overall skipper Arnaud Psarofaghis was still pleased with the team’s performance. “In the end, the battle for this regatta was a two-boat race, and we managed to come back at Oman Air in the middle of the day with two race wins, but then they were very strong in the last two races. It’s fun racing against them and it’s going to be a battle all the way to the end of the season.”

Red Bull Sailing Team were the other crew to make it on to the Palma podium, which was a goal achieved for skipper Roman Hagara. “The podium is what we wanted, and we’ve definitely made a step-up from the start of the season,” said the double Olympic Champion from Austria. “I’m proud of the consistent performance put in by the team here.” Long-time crewman on board Red Bull, Hans-Peter Steinacher still sees room for improvement before the end of the year. “With a new crew, it is not always easy to fight against teams who have been sailing together for years. But it’s clear that we are on our way up.”

Zoulou finished fourth, the only boat here to be helmed by a non-professional, Erik Maris. “I’ll have good memories of this regatta. Perfect conditions, wonderful sailing, I don't see how it could be any better in terms of the environment, the setting, the conditions, the race management. The race committee, as always, were excellent, and getting fourth in this fleet is very good. It was good that we were getting better during the regatta.”

While all types of grand prix sailing reward time in the boat, the need for experience is amplified in a foiling catamaran. This was only Keith Swinton’s second time at the helm of a GC32, the last time being three years ago - an aeon in GC32 terms. “The standard is a lot higher than when I last sailed the boat in 2016, but it’s good to be reminded how much fun these boats are,” said the Australian helmsman. “Where we’re lacking is in knowing all the little details, getting the rudder trim just right for example. You can make big gains when you get it right, but you go backwards really fast when you get it wrong.”

Iker Martinez and his new crew on M&G Tressis Silicius took everyone by surprise in the first race of the afternoon when they snuck through on the final windward leg to lead the reaching parade across the finish line. It was high-fives all round as the Spanish underdogs overtook the big teams for a famous race victory. After such a trying and testing week, this was just what the double Olympic medallist needed - for himself, his crew and his sponsors. “We are faster at the start of the day when we have energy. We had shifty winds and it was tricky conditions which was maybe an advantage for us because we sail in Palma quite a lot. Alinghi and Oman Air were fighting each other and we were lucky to get past them while that was going on."

“That race win was a big thank you to our sponsors after struggling a lot this week. We lost our boat captain to injury before the regatta, then we broke our bowsprit but thanks to Red Bull we got back on track again. Then we broke our shroud and missed all of day two, but Oman Air helped us out with a replacement. So it’s been a difficult week but we’ve really enjoyed it and to finish like we did with a race win was perfect.”

This evening the prizegiving for the 38th Copa del Rey MAPFRE took place at the Cathedral of Santa Maria of Palma, with the prizes awarded by the King of Spain, Felipe VI. For the GC32 Racing Tour, the season moves on to Lake Garda for the Riva Cup in September. Their victory in Palma puts Oman Air at the top of the overall leaderboard after three events, although tied on 5 points with their great rivals, Alinghi.