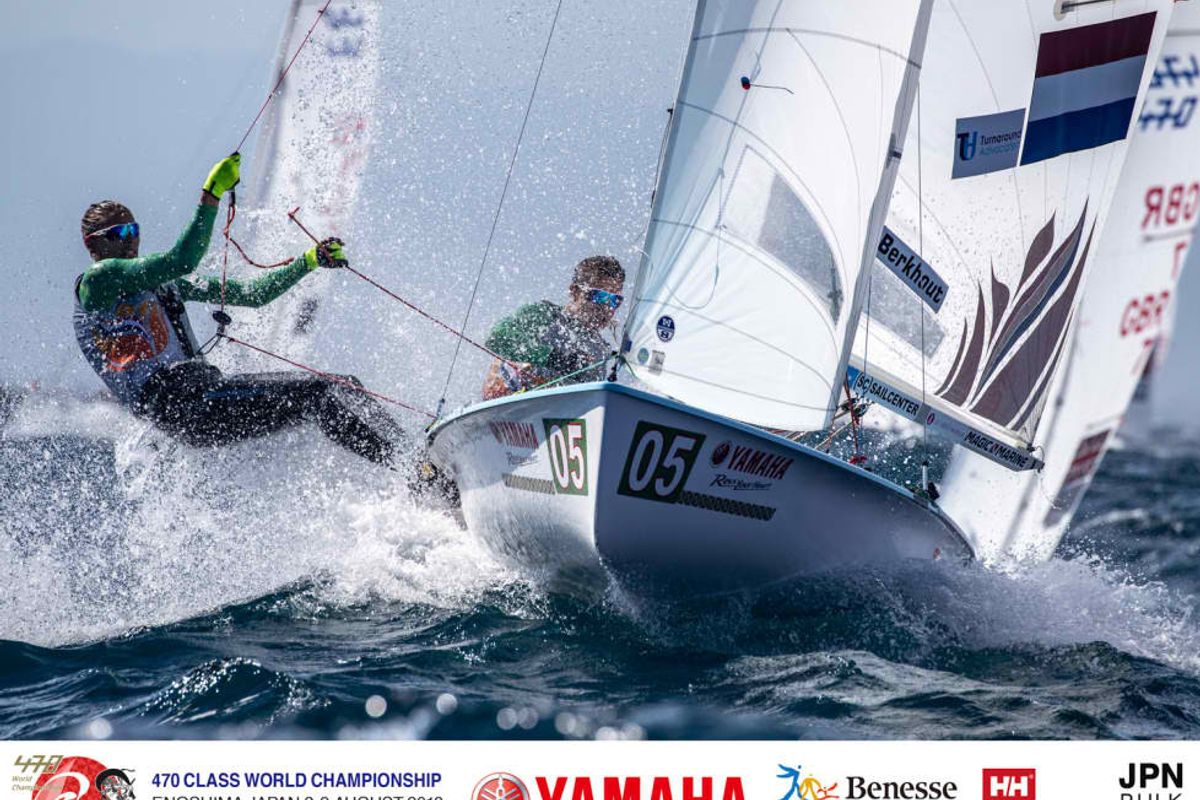 Race day 5 on Thursday 8 August was the day of reckoning at the 2019 470 World Championship in Enoshima, as the top-10 medal race line-up was decided in the 470 Men and Women and Tokyo 2020 Olympic qualification spots earned.

With three races to decide the four-nation qualification places on offer in the 470 Men and six in the 470 Women the fight was fierce and points close. Racing got underway on schedule at 12:00 hours with the wind between 11-13 knots and big, long waves. Enoshima Bay provided a spectacular stage of breeze and ocean racing that so suits the 470 Class.

The medal race line-up is confirmed and teams will be led out onto the race track by the series leaders, Jordi Xammar/Nicolas Rodriguez (ESP) in the men and Hannah Mills/Eilidh McIntyre (GBR) in the women. With just 1 point between the first and second-placed teams in men and women, the hunt for gold and silver is set to be a two-way battle, but the bronze medal doors are still open.

The 20-25 minute windward/leeward medal race will unfold on Enoshima course, just off Enoshima Yacht Harbour, with men up first for a 12:00 hours warning signal, and women at 13:00 hours.

470 MEN
On the track first for today’s three-race challenge were the men’s gold fleet, with the front players racing in their own game. Behind the series leaders many teams were locked in their final attack to claim Tokyo 2020 nation qualification.

Spain’s Xammar/Rodriguez and Mathew Belcher/Will Ryan (AUS) were neck and neck in each race, racking up scorecards of 1, 1, 4 and 3, 5, 1 respectively, to extend their points margin over the pack. The Spanish go into the medal race 1 point ahead of the Australians, so tomorrow will see a duke out for gold and silver. Whoever finishes in front walks away with the Championship crown.

Again and again, Xammar/Rodriguez unleashed their phenomenal teamwork to accelerate, make gains on the reach and downwind to reclaim the Championship lead from Belcher/Ryan. Seven race wins from 11 races is an extraordinary achievement.

“It has been really hard conditions,” said Xammar. “Today on the water I was thinking that all the exercise and physical preparation I did, all the months pre-season, now is the moment to feel we are more ready than the others.”

Looking ahead to the medal race battle for gold and silver, Xammar reflected, “It is really nice and very special of course. Mat and Will were my idols many years ago when I was a junior sailor and now to go into a ‘who wins wins’ in a senior World Championship is going to be very special. We are very happy with how we sailed and with our performance. Tomorrow I will try to enjoy the day and of course catch the opportunity.”

Seven-time 470 World Champion Belcher is equally excited about the challenge ahead, saying, “It was really great racing and that is why we do it. It has been a physically tough Championship and mentally really difficult and why I like to be at this level and to fight with Jordi. It is just brilliant and that’s everything about sport and I am really proud of him and I know he is really proud of me. I know tomorrow we are going to have a great day.”

The breeze and big seas over the past few days have taken their toll said Ryan. “It’s been a pretty tough event I think; to have that kind of format with so many races in a short few days in tough conditions. It was probably survival of the fittest a little bit,” in an echo of the Spanish sentiments about fitness levels.

“The Spanish have been putting in the hard work and it is nice to see them up there. Two of us for gold, that’s the way we like it and keeps it interesting. I am looking forward to tomorrow.”

Behind the Spanish and Australians, the fight for bronze will be a three-way face-off between Rio 2016 bronze medallists Panagiotis Mantis/Pavlos Kagialis, 2018 470 World Champions Kevin Peponnet/Jeremie Mion (FRA), and the 2019 European silver medallists Anton Dahlberg/Fredrik Bergström (SWE).

After a slow start to the Championship, with two double-digit finishes, Mantis/Kagialis have totally switched their game to make gains race by race and secure nation qualification to Tokyo 2020. Taking out results of 5, 2, 3, today they have advanced to third overall and have the bronze medal to secure.

“We are super thrilled to qualify our nation. We have done it again. It was more difficult this time, but we are really happy to do it,” said Mantis.

“Yes, the gold is already secured for the Australians and Spanish,” continued Kagialis. “We will fight for the bronze with the French and Swedish. So we are very happy because our start was not very good, but we are in a good position.”

A pressure cooker environment for the teams seeking nation qualification as the leader board after race 9 saw China move into the top four placed unqualified nations, joining Greece, Russia and Turkey, whilst Hungary fell off the top four spots. China’s Zangjun Xu/Chao Wang dug deep for scores of 6, 6, 10, making it their best performance of the Championship. Pushing hard from behind and also hoping their fortunes would turn during the next two races were the teams representing Switzerland, Germany, Argentina and Israel. But the points mountain was too high and the scoreboard proved to be irreversible.

470 WOMEN
Series leaders Hannah Mills/Eilidh McIntyre (GBR) and Ai Kondo Yoshida/Miho Yoshioka (JPN) both got caught up and add double-digit finishes to their scorelines today, and with it, the points gap closed to the chasing pack.

In the race for gold, series leaders Hannah Mills/Eilidh McIntyre (GBR) will go into the medal race holding a 1 point advantage over Japan’s defending World Champions Ai Kondo Yoshida/Miho Yoshioka. After winning the final race of the day, only third-placed France’s Camille Lecointre/Aloïse Retornaz can challenge the British and Japanese for gold, but it would require a long shot of the French winning the medal race with the British finishing last and the Japanese in ninth. More likely the French will take a defensive approach, try to keep their names on the bronze medal, and see off the challenge from the Italian partnership of Elena Berta/Bianca Caruso and Spain’s Silvia Mas/Patricia Cantero in 3rd and 4th respectively.

Kondo Yoshida/Yoshioka have guaranteed their podium finish and now just want the gold.

“I'm really tired, but I'm fighting at the top,” said Kondo Yoshida. “Tomorrow’s medal race, I want to aim for a gold medal.”

Yoshioka added, “I want to do my best with the feeling that I will never lose.”

Describing the race track, Lecointre explained, “It was like a washing machine out there and many times we felt like we might capsize in the huge waves. It is not usual for our team to have these kinds of waves, so it was tough.”

Speaking about their race 11 win, Retornaz continued, “We wanted to have a good race to finish this fleet stage. We wanted to do our best and particularly after the mistake of yesterday we said ‘not any more’. We knew we would have strong wind today and we wanted to deliver our speed and find a clear leg.”

With the medal potential teams racing out front, elsewhere in the pack it was all about making the medal race cut and nation qualification.

Australia’s Nia Jerwood, racing with Monique De Vries, has come a long way since her last World Championship appearance in Japan, a 4th place at the 2015 420 Worlds in Karatsu.

“It’s pretty awesome,” grinned Jerwood on securing Australia’s qualification and a spot in the medal race. “It was certainly our goal coming into this event, so we are very excited.”

“This is what we train for,” commented De Vries on the demands of the Championship racing schedule. “We do all our fitness training for that purpose in mind, being able to back up day after day and compete at our best even after three days of three back to back races.”

Next up is national selection, as De Vries explained, “We are not guaranteed to be sent to the Games, but if we can keep performing we will be very excited to hopefully represent Australia.”

Brazil’s Fernanda Oliveira/Ana Barbachan were suitably confident about their nation qualification status after yesterday’s solid day, so went all guns blazing to seize the opening race win and with it secure their place inside the medal race top 10.

Securing nation qualification, but not their best performance were the Dutch team of Afrodite Zegers/Lobke Berkhout.

“It is a bit of a mixed feeling because the World Championship didn’t go as we wanted results-wise,” said Zegers. “But our main goal was to qualify the country, so in that case, we are quite happy about it, but we still have a lot of points to improve the coming year and going for a final goal during the Games which is a medal."

Zegers has teamed up with one of the best crews in Berkhout. “I’ve been to two Olympic Games before, 2008 and 2012. I had a bronze and a silver, so one is still missing,” grinned Berkhout. “So, it is great to qualify one year before the Games because we also secured our national qualification already. So we just have one year to do everything we want to be as ready as we can next year. And then we hope to fight for the medals. This World Championship is a bit disappointing as we finished third at the European, we expect to definitely be in the top 10 here, but the conditions were quite hard.

NATIONS QUALIFIED TO TOKYO 2020 AT 470 WORLDS
Subject to final notification from World Sailing after the event to the relevant Member National Authority / National Olympic Committee, the following nations have earned qualification at the 2019 470 World Championship: