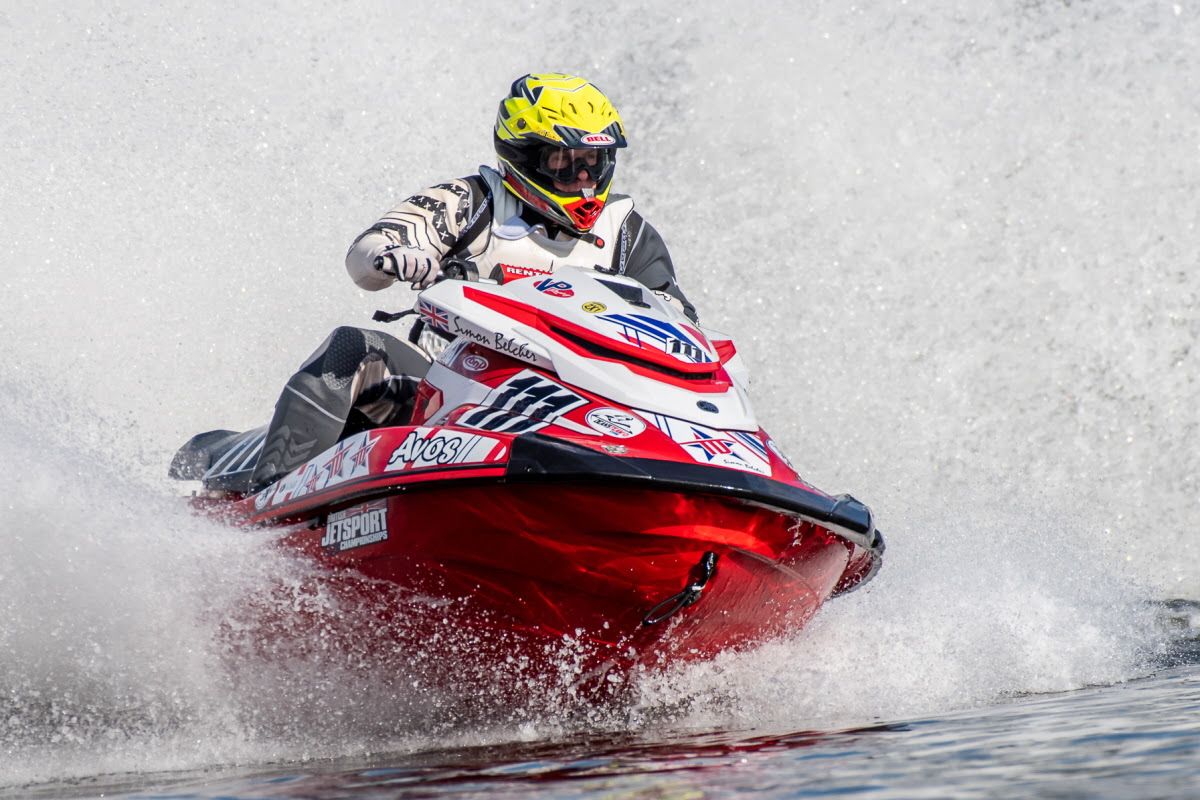 Simon Belcher’s already remarkable 2019 season only got better at the weekend during the final round of the British Championship at Kingsbury Waterpark, where the Swindon sportsman incredibly claimed two more titles – the British Pro GP and Veteran class crowns.

Having already successfully defended his European Jet Sport ‘Pro Stock’ Championship at the end of June, he then won the British Pro-Am Stock Jet Sport title last month during the penultimate event of the national season.

One week ago Belcher won the domestic Belgian Jet Sport Stock Championship and this past Sunday, 8th September, he made it a famous five titles in total so far in 2019 with another series of superb performances during the finale to the British season in Sutton Coldfield.

Beginning his weekend by wrapping-up the Veteran class crown on Saturday, 7th September, the Briton – who only returned to full-time competition last year after almost two decades away from Jet Sport competition – then added the Pro GP title on Sunday during the second of three races.

Notably, Belcher won the Pro GP Championship riding his trusty ‘stock’ Dean’s Team Yamaha and AVOS boat – a triumph of consistency over World Champion James Bushell and his Pro GP boat. The success for Belcher means this is only the second time in 12 years Bushell hasn’t won the British Pro GP crown.

“While my Pro Stock boat was no match for James [Bushell] and his Pro GP boat, our reliability and fantastic consistency this season made the difference – I’m elated to win the championship and the Veteran class as well”, said Belcher, “I’ve trained very hard this season to make sure I’m in the best shape possible, but that’s only part of it as there’s a team around me which makes all this possible.

“I have to say a huge thank you to my family for their support and, of course, to the guys at Dean’s Team Yamaha and AVOS plus all of the other sponsors who have given me such fantastic backing again this year. To have won five titles this season is an unbelievable achievement, I can’t say I expected to have so much success in only my second full year back on the water – it’s incredible.”

With his stunning clutch of five 2019 titles, Belcher could potentially even add more later this year when he participates in the World Finals at Lake Havasu in Arizona, USA, in October, the World Championships in Florida, in November, and the World Cup in Pattaya City, Thailand, in December.

After hanging up his wet suit almost two decades ago after a glittering career in Jet Sport, Belcher turned his attention to the race track where he raced successfully in the Legends Cars National Championship before moving into the Renault UK Clio Cup – winning back-to-back Masters titles.

Achieving his dream of racing in the British Touring Car Championship after moving into the UK’s biggest motor racing series with his own HMS Racing team [then Handy Motorsport] in 2014, Belcher stepped out from behind the wheel at the end of the following season to focus on running the squad in the BTCC and also, this year, the Dunlop Touring Car Trophy.