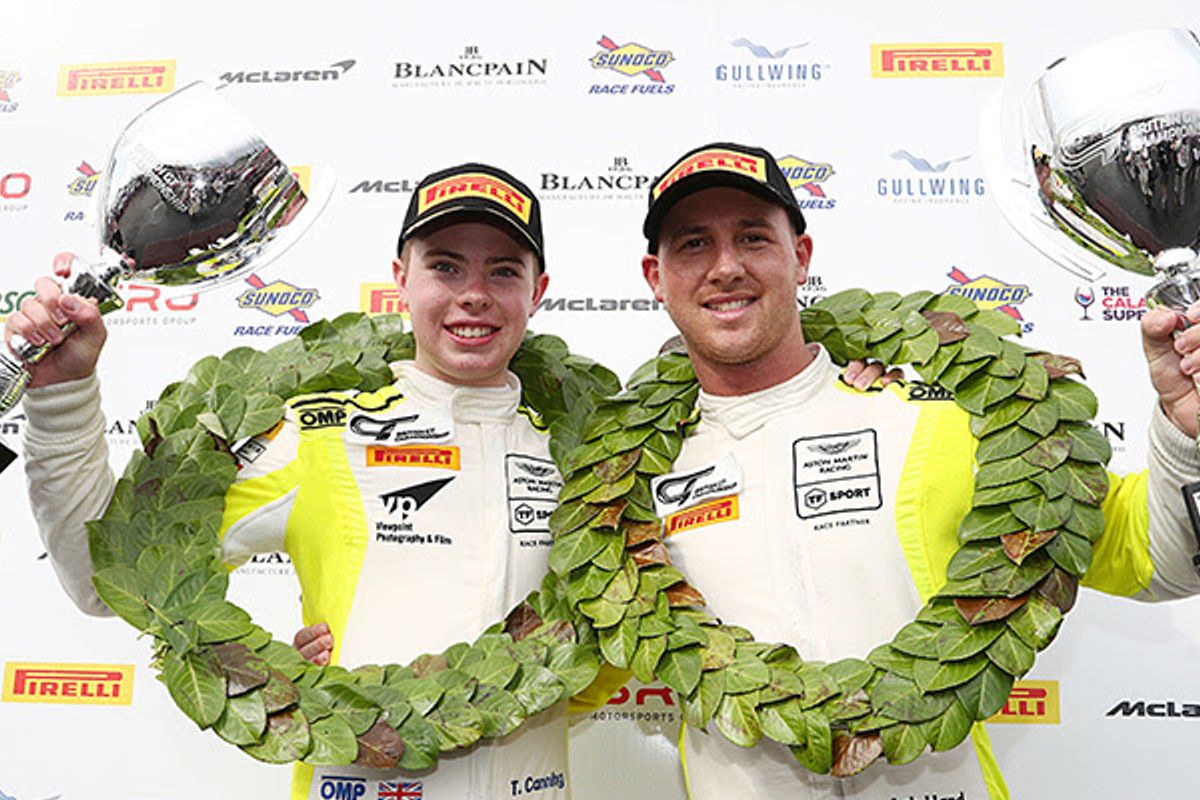 Tom Canning and Ashley Hand clinched the British GT4 title in today's two-hour season finale at Donington Park (September 15) by surviving late pressure from behind while being made to sweat by a charging championship rival ahead. Victory went to Steller Performance’s Richard Williams and Sennan Fielding who converted pole position into theirs and Audi’s second win of the campaign.

In traditional GT4 fashion, the battle to be crowned champion went down to the wire. A record six crews were in contention for the overall crown heading to Donington, with Canning and Hand topping the table on 117.5 points. When the race got underway they looked to be on course for a relatively straightforward run to the chequered flag, with Aston Martin Academy ace Canning delivering a perfect opening stint at the wheel of the #97 Vantage.

The teenager spent the bulk of the hour running a close second to Williams. And with Steller’s entry not in title contention, that scenario was more than enough to confirm the #97 Aston Martin crew as champions. Canning then passed the Audi to assume the race lead 10 minutes before the hour, further easing tensions in the TF Sport garage.

By the close of the opening stint TF had two cars running in podium positions. The #95 Aston occupied third after Patrick Kibble overhauled Callum Pointon in the #57 HHC McLaren, which then slipped to fifth when another title contender, Scott Maxwell, moved Multimatic’s Ford Mustang up to fourth.

With the Canning/Hand car serving a 10-second Success Penalty, the leading positions were reversed during the pitstops. Fielding resumed with Steller’s Audi at the head of the field, while Hand assumed the controls of the #97 Aston Martin in second spot.

This was still more than enough to seal the title, but there was late drama to come. The Safety Car was deployed with a little over 30 minutes left on the clock when Connor O'Brien spun his Optimum Aston Martin across the grass and was collected by Aaron Taylor-Smith's Race Performance Ford on the exit of the Old Hairpin. A heavy impact followed, though fortunately both drivers were able to walk away from the scene of the accident.

When racing resumed Hand faced immediate pressure from behind as Seb Priaulx looked to continue Maxwell's progress from fifth on the grid in the #15 Multimatic Ford. Having climbed to third during the pit window, Priaulx pounced shortly after the Safety Car withdrew to move into second position.

Suddenly, the championship dynamic began to shift. While Hand could afford to drop another spot and still seal the title, he was powerless to affect the situation ahead. The charging Priaulx required just one more position to ensure that he and Maxwell were crowned champions and duly set off in pursuit of Fielding.

The youngster gave it his all but ultimately could not get close enough to make a move on the Audi. Priaulx was just 1.5 seconds shy of the lead at the chequered flag after putting almost 15 seconds between himself and Hand. This was of no consequence to the TF Sport man, however, as a third-place finish guaranteed that he and Canning were confirmed as 2019’s British GT4 champions.

The Steller Audi captured its first win since the season’s second round at Snetterton and the crew's first since moving to the Silver Cup category.

Behind the title-winning TF Sport crew, Fletcher and Plowman took fourth overall and a comfortable Pro/Am win to secure the class title. The result also ensured Beechdean AMR’s Aston Martin maintained its feat of scoring points towards the overall championship in all nine of this year’s races en route to fifth in the final GT4 classification.

The Optimum Motorsport Aston Martin driven by Patrik Matthiesen and Mike Robinson took fifth ahead of the #95 TF Sport Aston of Kibble and Josh Price. The Pro/Am podium was completed by the next two cars across the line, with the #77 Fox Mercedes-AMG of Mark Murfitt and Michael Broadhurst edging out the Graham Johnson/Michael O'Brien-driven Balfe McLaren by just half a second.

TF Sport’s day would get even better, though. Top-six finishes for both of its Astons ensured Tom Ferrier’s squad overhauled McLaren outfits Tolman and HHC to be crowned GT4 Teams’ champions for 2019. What’s more, Canning and Hand also picked up the Silver Cup title, while the latter’s 1m35.886s won him the Sunoco Fastest Lap Award and set a new British GT4 record to boot.