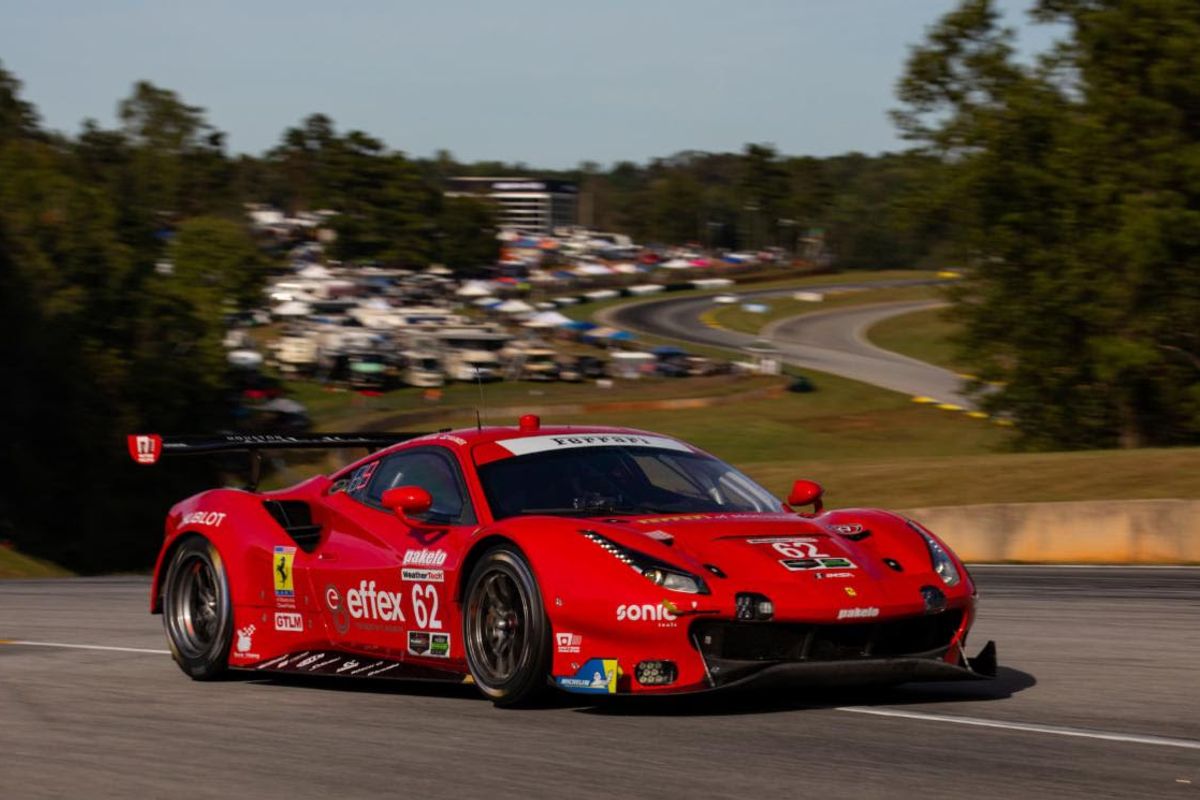 The Track: Road Atlanta is one of the favorite tracks for Risi Competizione and most of our drivers. Favorites tend to be the ones you've had success at, and this is no exception. It's a fast track layout with a variety of different types of corners making it technically challenging for both the drivers and engineers. It's a busy track for the drivers requiring continuous driver inputs of throttle and steering for a fast lap. You have to hustle the car here to go quickly.

The requirements to go fast at Road Atlanta are always the same. You need a good platform for the high-speed corners - Turn 1, the Esses and Turn 12.  You can gain a significant amount of time using the apex curbs effectively at Turn 3 and the exit curbs of Turn 5. The curbs at both Turns 7 and 10 also yield lap time. However, as much as you need the curbs for a quick lap time, you have to exercise caution as using them repeatedly here 'could' lead to failed drivetrain components. It's a long 10-hour race and you need to be somewhat kind to the car; you have to finish to win. Top speed is very important as there are few places to pass.

Setup: Stiffer (springs and anti-roll bars) is better for platform support, but curbing is so important here, it is a compromise. A stiff setup also makes cleaning the pick-up off the tires easier as you can load the tires harder. With such a big field and a short track, the number of times that a GT car may experience pick-up by having to go off the racing line will be increased. Numerous safety car periods are common at Petit, making clean, hot tires for restarts an important consideration in tire compound choice and setup. Dampers that give support, but blow-off on the curbs, can make a big difference here, not just in lap time but longevity of the drivetrain components.

Top speed and downforce level will be based on peer group straight speeds.  Greater overall downforce is the quicker way around the track and better for tire life, but you can't let the competition drive around you on the straight. Passing will be difficult, especially in GTLM with the nine super-competitive cars from five different manufacturers. The best passing spot will be braking into Turn 10. However, if you can't keep up on the straight you won't be in a position to out-brake someone into Turn 10.  The track isn't particularly hard on brakes, but you need the brakes to last the 390+ laps that the GTLM cars will run during the race.

Keeping the car low to the ground (low running ride heights) is a challenge at Road Atlanta. Your options are to run very high ride heights (Sebring track levels) or stiff springs or bump rubbers and packers to hold the car up in the large compression areas. The main areas where the car will contact the track are the bumps in the middle of Turn 1 (left rear) and the curb in Turn 3 (right side), either the curb itself or the landing from launching off the curb. Your ability to setup around these features will ultimately determine how low to the track you can run the car.

Competition: This is a unique period in GTLM. Corvette and Porsche will be racing new cars in 2020. The new 2020 Corvette is completely different with a mid-engine turbo and Ford is not racing in 2020. What influence will pace at Petit have on the BoP (Balance of Performance) for new 2020 cars? In this era, keeping a BoP advantage is a HUGE concern; every manufacturer's focal point. All the Porsches have to do is start the race and they have the manufacturer's, team and driver's titles wrapped up for 2019. As you don't have to finish to get points; second and third are not as cut and dry. Teams (manufacturers) will weigh the benefit of how much pace they have to show to win or finish well, against the potential negative BoP ramifications for 2020. IMSA has added language in the rules to preclude teams manipulating pace to control the BoP, but this is impossible to enforce. On a 1m18s lap the difference between first and last place pace is a mere .5 sec/lap.

The BoP for Petit has given the Ferrari a chance to compete this year, with increased power. Power had been the main Ferrari GTLM disadvantage for several seasons.

The Race: Traffic will play a large role as always at Petit, particularly with the large car count. Keeping out of trouble will be crucial for success.

Pit work needs to be only fuel, tires and driver changes with the occasional addition of engine oil. Anything extra or slow pit work will put you at the back of the field quickly. It's so hard to pass same class cars, you can't lose positions in the pits.

Qualifying is less important at these long races then the sprint 2 hour and 40-minute events but keeping up in the lead pack will always be vital due to the level of competition and how difficult it is to pass at Road Atlanta. The current caution rules should keep the GTLM front-runners on the same lap.

Risi run Ferrari's have fared well at Petit over the years; it's one of the team's more successful venues. The recent BoP (Balance of Performance) update should give the Risi Ferrari a better chance this year. This is only our second IMSA race this year and let's hope we can end the season on a high note.