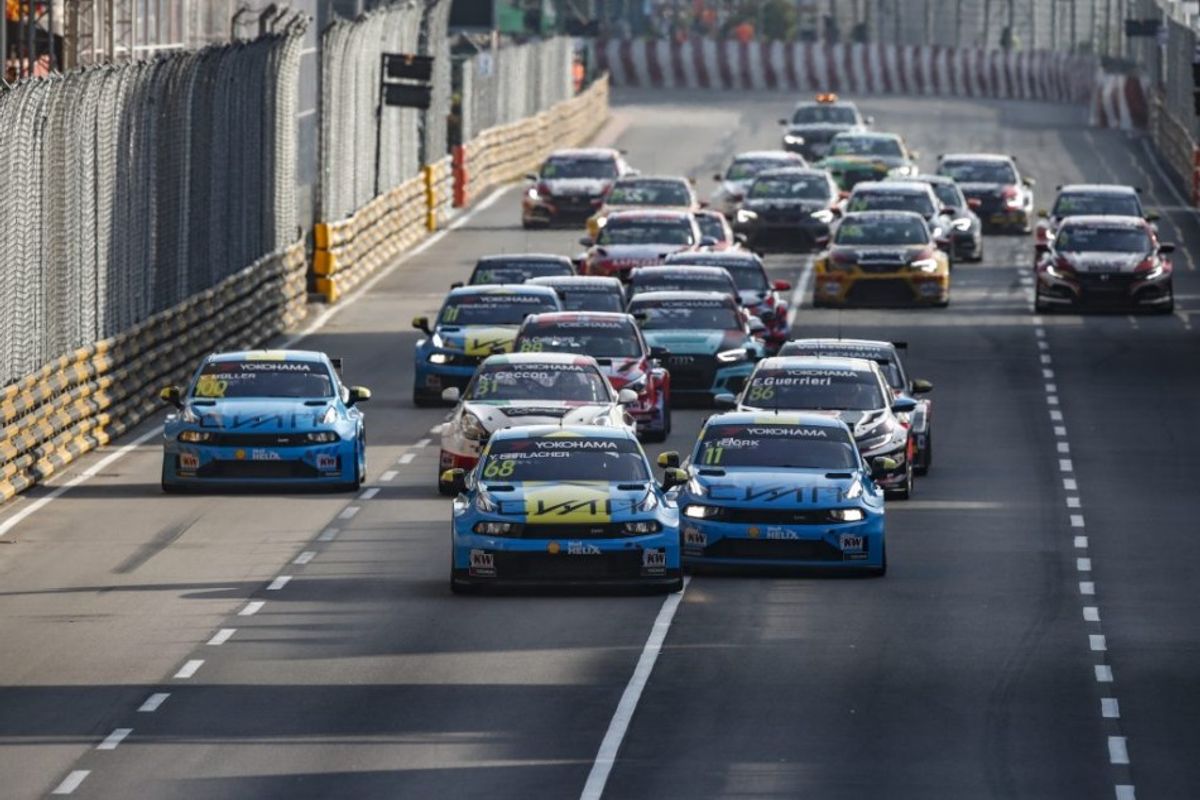 Hungarian Michelisz finished second in Race 1 before battling to P10 and P12 in the two Sunday races – a crash in Second Qualifying Q1 hitting his hopes of a bigger score. Guerrieri, meanwhile, was a Race 1 DNF but took fourth in Race 2 and P10 in Race 3. He was set to start Race 2 on the DHL pole only to be hit with a grid penalty and drop to fourth in the order.

There were no such problems for Muller (Cyan Racing Lynk & Co), who converted his First Qualifying DHL pole into a Race 1 victory, which he followed up with a charging drive from fifth to first in Race 2. Sixth in Race 3 puts him two points behind Guerrieri and 11 behind Michelisz.

Kevin Ceccon (Team Mulsanne) hit back from his WTCR JVCKENWOOD Race of Japan podium disappointment to twice finish in the top three aboard an Alfa Romeo Giulietta TCR.

Rob Huff was fourth in Race 1 but his pursuit of a record-extending 10th Macau Guia Race win were dashed when he was unable to turn the Race 3 DHL qualifying top spot into a victory for SLR VW Motorsport. He finished second with Jean-Karl Vernay taking third for Leopard Racing Team Audi Sport. Johan Kristoffersson, the double FIA World Rallycross champion, was the best Macau rookie with fifth in Race 2 and fourth in Race 3 for SLR Volkswagen.

Nicky Catsburg (BRC Hyundai N LUKOIL Racing Team) picked up the TAG Heuer Best Lap Trophy for his Race 2 charge, while Billy Lo was the best of the wildcard racers, the Macanese driver a weekend high of P23 in Race 1.

Tom Coronel was twice in the top 15 for Comtoyou DHL Team CUPRA Racing as Luca Engstler scored his first WTCR / OSCARO points in Race 3, having been called up to deputise for Augusto Farfus at BRC Hyundai N LUKOIL Racing Team.

The Cyan Performance Lynk & Co driver got the drop on DHL Pole Position starter Huff to take the lead off the line, then held back a four-car train for all 11 laps to secure his first WTCR / OSCARO race victory, which he dedicated to his daughter Daniella, who turns 16 today.

Huff was disappointed to miss out on what would have been his 10th race win at Macau, but congratulated his rival. “It was a normal start – I’ve always struggled to get the Golf off the line. It is what it is. We were down on the straights as always. But it was a good race and to be beaten by Andy, I don’t mind really. It’s always enjoyable to race with him.”

Meanwhile, the #RoadToMalaysia title race tightened up further after a closely fought weekend of racing. Points leader Norbert Michelisz finished where he started in P12, with his closest rival Esteban Guerrieri in P10 and double Macau race winner Yvan Muller in sixth. It leaves Michelisz just nine points ahead of Guerrieri, with Muller two points further back with the WTCR Race of Malaysia season super-finale to come.

Priaulx was forced to work hard for his win, with Huff close behind him for most of the lap. But the Lynk & Co just had the edge over the Golf on the long straights, with third-placed Jean-Karl Vernay in his Leopard Racing Team Audi Sport RS 3 LMS pressuring Huff lap after lap under braking at Lisboa. SLR Volkswagen’s Johan Kristoffersson completed the four-car train at the front to finish on a strong note on his first visit to Macau.

Thed Björk ran in a lonely fifth for much of the race, but on the last lap sacrificed his position and points for Muller by dropping back. That elevated BRC Hyundai N LUKOIL Racing Team’s Nicky Catsburg to fifth, with Muller sixth and Björk seventh.

The fourth Lynk & Co of Yann Ehrlacher completed a successful weekend for the Chinese customer racing brand with eighth, ahead of Kevin Ceccon’s Team Mulsanne Alfa Romeo Giulietta Veloce TCR. Guerrieri completed the top 10 at the end of a difficult weekend for ALL-INKL.COM Münnich Motorsport but remains firmly in title contention, nine points behind Michelisz.

Muller's win, which followed his Race 1 triumph on Saturday, means the Frenchman has made further gains in the #RoadToMalaysia points chase. Title leader Norbert Michelisz finished in P10, with Esteban Guerrieri in fourth – which leaves the Hungarian 11 points ahead of the Argentine, with Muller just a further six points back.

The result all came down to the start. DHL Pole Position winner Yann Erhlacher and Björk made clean getaways from the front in their Lynk & Cos, while Muller shot away from fifth to pass both Guerrieri and then third-placed starter Kevin Ceccon well before the field were through Lisboa.

Then during that first lap, Ehrlacher and Björk both let Muller past to ensure the Frenchman would take the win and lead Lynk & Co’s WTCR / OSCARO title push.

Running third at the end of lap one, Ehrlacher then lost a place to Guerrieri and dropped further down the order as he slid wide out of Lisboa, where Guerrieri pulled off an impressive passing move. But Guerrieri’s ALL-INKL.COM Münnich Motorsport Honda Civic Type R TCR didn’t hold on to third place for long. On lap three, Ceccon’s Team Mulsanne Alfa Romeo Giulietta Veloce TCR drafted past him to claim his second podium of the weekend, following the Italian’s third place in Race 1.

Guerrieri then faced a stern challenge from BRC Hyundai N LUKOIL Racing Team’s Nicky Catsburg. The Dutchman came close to passing him on the last lap, but Guerrieri held firm. Then Catsburg sacrificed his race and dropped down the order to allow Michelisz to score more points for the title and move into P10.

Niels Langeveld was delayed in a first-lap collision at Lisboa, where Mehdi Bennani and Attila Tassi also collided later in the race.