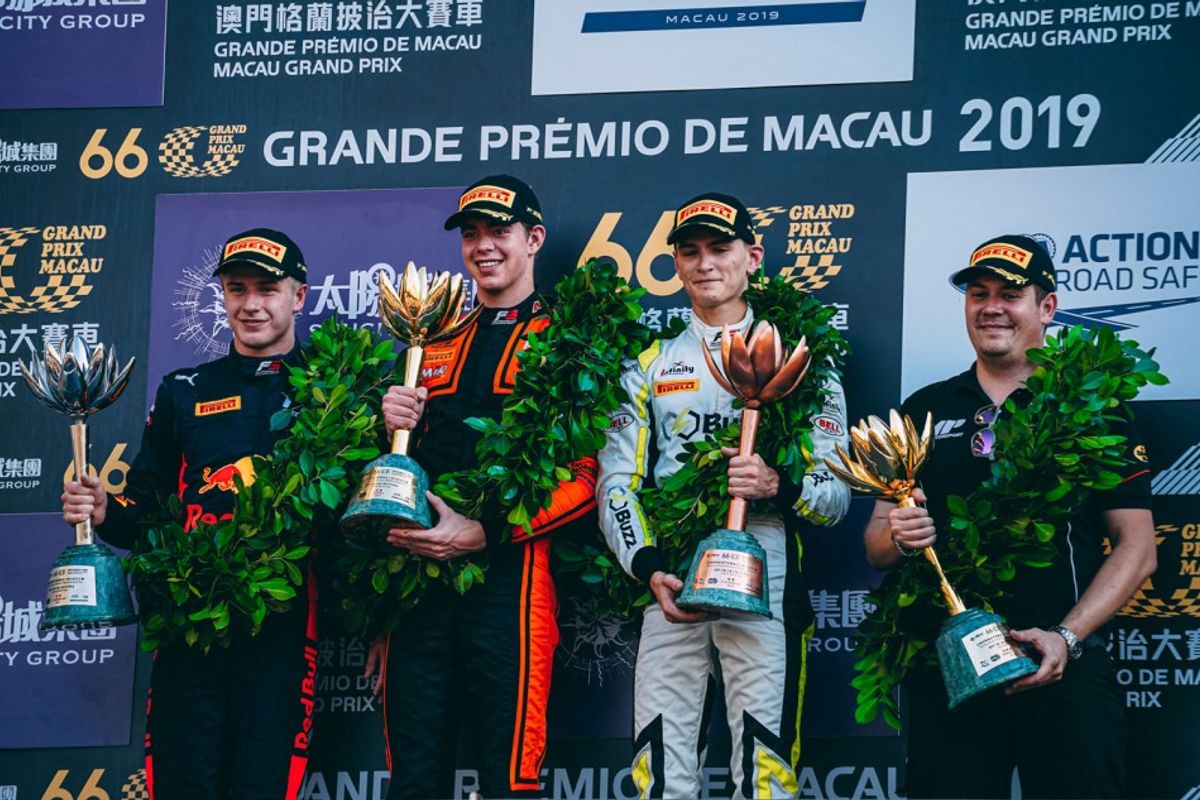 Polesitter Juri Vips made a clean getaway and managed to keep fellow front-row starter Robert Shwartzman at bay on the run down to Lisboa for the first time.

Newly crowned FIA Formula 3 Champion, Shwartzman, came under immediate pressure from the fast-charging Christian Lundgaard, who started third on the grid. There was a slight coming together between the SJM Prema Theodore Racing-run Dallara and the ART Grand Prix car of Lundgaard as the two went through the ultra-fast Mandarin right-hander. The impact was enough to damage the front wing on Shwartzman’s car, effectively leading to the Russian’s retirement on the opening lap.

Starting from fourth on the grid, Verschoor capitalised on the situation with his own blistering start, keeping to the inside line to gain two places.

There were a number of minor incidents during the race, but arguably the most significant belonged to Ferdinand Habsburg as he speared his ART Grand Prix car into the barriers through the Esses, bringing out the safety car.

Dutch racer Verschoor kept Vips on his toes throughout but he eyed his opportunity immediately after the restart, launching a successful attack on the Red Bull-backed Estonian under braking into the Lisboa corner with two-thirds of the distance completed.

In the closing stages of the race Verschoor managed to withstand the pressure from Vips and went on to clinch the 2019 FIA F3 World Cup, with Vips and Sargeant rounding out the podium.

Other incident’s included Campos Racing’s Leonardo Pulcini going straight on into the tyre barrier at Lisboa and Sophia Floersch pulling over and retiring her car on the main straight, the latter bringing about a late VSC.

Richard Verschoor said: “To be honest, I am not believing the feeling yet! It hasn’t sunk in that I have just won the Macau Grand Prix! It was a really busy race and I was under a lot of pressure, I had to concentrate so much towards the end and I am still recovering a bit. Both the team and myself are may be not as experienced yet or consistently at the same level as some of the other guys, so this is a huge result for the team, myself and everyone involved. I would like to thank everyone at MP Motorsport.”

Juri Vips said: “I am feeling a little disappointed because I feel that I have done the perfect weekend – minus the safety car restart. I don’t really know what happened there, I knew I had something on my tyres, which was maybe some debris. I felt going into the last two corners my tyres were far from ready and Richard got close to me and passed me. I kept Richard under pressure during the middle sector, but in the last two corners the balance difference was too big to get a good exit and take advantage of the DRS.”

Logan Sargeant said: “Firstly I would like to thank Carlin – they have done an absolute brilliant job this weekend. We have definitely improved the car during the season and we have proved it this weekend. We had a decent enough start, nothing special. I got a good run through Mandarin and I think I picked up a couple of positions. I picked them off one-by-one trying to catch the leaders. It was a bit of a shame after the VSC because I felt I lost the confidence and the grip I had with the tyres. We had to settle for third but I am happy and we will definitely be back next year trying to win!”