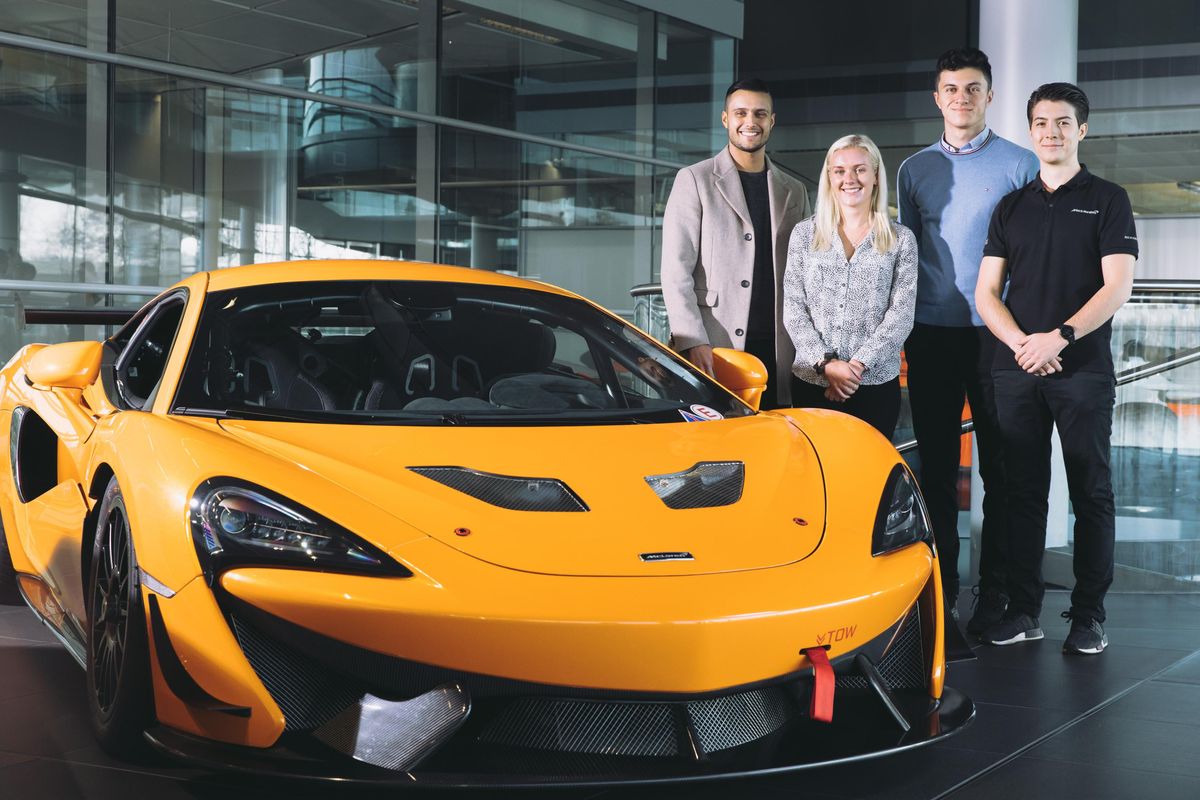 The McLaren Automotive Driver Development Programme enters its third year in 2020 and, once again, will see four of the most exciting youngsters in motorsport fighting for top honours at the wheel of a McLaren 570S GT4. Having been shortlisted after an impressive 2019 season, Katie Milner (UK), Michael Benyahia (USA), Harry Hayek (AUS) and Alain Valente (CH) shone during the assessment programme to secure one of the coveted race seats for the 2020 season. As in 2018 and 2019, the programme will be run by Customer Racing team Tolman Motorsport with two cars running in the British GT Championship.

The final four drivers were selected from a shortlisted group of 18 young, talented, up-and-coming drivers during an intensive two-day process. The names were from a diverse range of motorsport backgrounds who have each individually impressed in their respective 2019 campaigns across the UK, Europe, North America and Australia.

The programme was held at the UK’s Snetterton circuit, and saw the drivers assessed across a number of different attributes on and off-track. Each participant arrived at the circuit with the programme set up to simulate a race weekend, working with the McLaren Customer Racing engineers on set up before embarking on qualifying and race simulations.

After the track running, the drivers were then individually assessed on data analysis and telemetry, working with the engineering team and driver coaches. Off track, each of the drivers were subjected to a mental and physical assessment with media interviews carried out in conjunction with the team from motorsport.com and fitness tests run by programme partner iZone. The results from these independent specialists was key to the assessment, and the feedback forms the start of the drivers’ involvement with the Driver Development Programme. The selected drivers will continue to build on these relationships with motorsport.com and iZone throughout the 2020 season, along with McLaren Customer Racing as they each look to further establish themselves and build a strong foundation for a future career in motorsport.

Katie Milner
20-year old Katie Milner was born in York, England. Impressing from her first season behind the wheel, she has proven herself with multiple championship-winning performances in Autograss before becoming the first female Junior Saloon champion in 2016. Following this, Katie moved across to the Ginetta GT5 Challenge in 2017 where she has continued to fine tune her race craft with a number of race-winning performances. Katie was also awarded the British Women Racing Drivers Club (BWRDC) Gold Star in 2016.

Michael Benyahia
Michael Benyahia is from Miami, Florida, and he will race a McLaren for a second year in 2020 after strong performances in the ADAC GT4 Germany championship at the wheel of the 570S GT4 with Team GT. Of particular note was his race performance with Team GT at the Nürburgring where the 19-year old took race victory. The 2019 season saw Michael make the switch to GT racing after taking the runners-up spot in Formula F4 in 2016, followed by being crowned 2017 Formula Renault NEC champion.

Harry Hayek
Sydney-born Harry Hayek, 21 years old, was a relatively late-starter to motorsport after karting at the age of 14. Across the following two years, Harry became multiple Australian State karting champion before moving to single-seaters. Here he scored multiple Australian F4 race wins and moved to the British F3 championship in 2017. A severe accident and subsequent health reasons ended Harry’s promising career progression, but after battling to make a full recovery he returned to racing in 2019 and immediately impressed with a podium on his first outing in Australian F4.

Alain Valente
Alain Valente campaigned with a McLaren Customer Racing team during the 2019 season at the wheel of a 570S GT4. The 23-year old, born in Bern, Switzerland, ran with Team GT throughout the year and scored a race win at the Red Bull Ring in Austria. Prior to this, Alain saw success in the GT4 European Series in 2018 following a switch from the FIA Italian F4 season after the 2014 season which saw multiple podium finishes. In 2013, Alain won the coveted Auto Sport Switzerland Young Driver Award.

“The Driver Development Programme is an extremely important part of the motorsport landscape at McLaren Automotive, and it is becoming stronger with each season. This year’s group of shortlisted drivers was the largest we have ever assessed and it was a truly global mix, which is great to see. They were also the strongest selection we’ve ever seen, and the decision for the final four was extremely difficult.

“The aim of the Driver Development Programme is to work with each of the four successful candidates throughout the year and help build them into a more complete driver, both on and off the track. Each one of the drivers who took part in the assessment is a true young professional and extremely capable and competent. There is no denying they are all very quick behind the wheel, but the driving is only a small part of what it takes to build a successful and sustainable career in motorsport. For Katie, Michael, Harry and Alain the work really starts now, and we will work with them – and push them – to build and improve their whole skill-set. Throughout the year, the team will work on a number of areas including personal fitness, nutrition, engineering expertise, racecraft and PR to help them develop into a complete package as a racing driver.”

After being launched by Mclaren Automotive in 2018, the Driver Development Programme saw a milestone victory during the Snetterton 300 race with a first victory, as Jordan Collard and Lewis Proctor took top honours. This result was one of two victories and five further podium finishes for the two GT4 entries run in partnership with Customer Racing team Tolman Motorsport. These results saw Tolman Motorsport secure 2nd in the GT4 Teams championship standings. Collard and Proctor also steered the #5 570S GT4 to fourth spot in both the GT4 Drivers and GT4 Silver championship standings, while teammates James Dorlin and Josh Smith in the #4 570S GT4 ended the season in fifth place in the Silver standings, sixth overall.

The McLaren Automotive Driver Development Programme is partnered with Prosource, Richard Mille and Pirelli once again for the 2020 season.