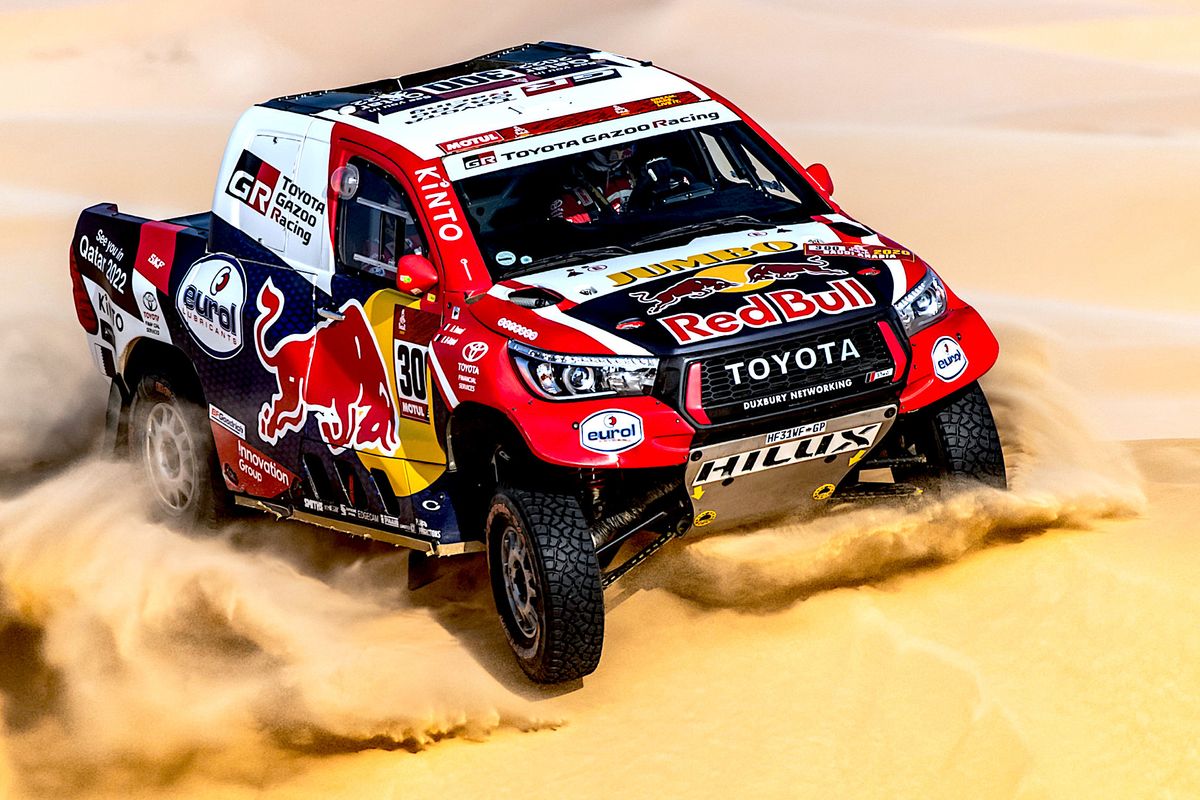 Dakar Saudi Arabia delivered another scintillating penultimate day of racing to see the lead battles tighten up following the closest of finishes in both the car and bike races on Thursday.

Stephane Peterhansel beat Nasser Al Attiyah to win the car race by just ten seconds, as Attiyah cut Carlos Sainz’ overall lead in half, while third overall Peterhansel closed his gap to Attiyah down to all of five seconds. It was just as good in the bikes, as Pablo Quintanilla fought off Matthias Walkner to take the day’s 374km race to Hradah by no more than nine seconds, as he likewise slashed his deficit to overall bike race leader Ricky Brabec in half too.

13-time Dakar winner on two and four wheels, Frenchman Peterhansel took 8 minutes out of his Mini buggy teammate, former world rally and Dakar champion Carlos Sainz senior to close that advantage down from 18 to just over ten minutes with a significant 374 kilometres still to race to the finish at Qiddia on Friday. But Mr Dakar has a far bigger problem on his hands as Qatar’s 2019 Dakar winner Nasser Al Attiyah came home just ten seconds behind Mr Dakar in his SA-built and run Toyota to stay all of five seconds ahead of the Mini in the general standings after 11 days and 7000km of racing!

Chilean Husqvarna rider Quintanilla charged out of the blocks Thursday morning, running further back on the road following a tough day in the saddle on Wednesday, but he had to fend off the attentions of Austrian KTM man Walkner. Wednesday’s winning Honda trio, Argentine Kevin Benavides, Californian Brabec and Spaniard Joan Barreda Bort meanwhile lost time as they cleared the road along with Botswana top privateer Ross Branch, while 2019 winner, Aussie Toby Price kept close to the leaders.

Quintanilla only just beat Walkner, with Luciano Benavides (KTM), Cornejo Florimo (Honda) and Price next and Kevin Benavides only ninth from Brabec, Branch and Barreda to see Quintanilla close Brabec’s 26 minute advantage down to under 14 minutes as Price and Walkner passed Barreda to move up to third and fourth overall too. Day 2 winner Branch moved back up to 21st overall following his earlier troubles, while SA riders Kirsten Landman and Stuart Gregory were 65th and 72nd and Zimbabwe’s Graeme Sharp 81st, but Taye Perry was sadly stuck with bike trouble as we wrote.

Pole Rafael Sonik took the quad stage from overall leader, Chilean Ignacio Casale who takes a 21 minute lead into the final day over Frenchman Stefan Vitse and it was another unstoppable Russian Kamaz 1-2-3 in the truck race as Andrey Karginov consolidated his overall advantage with another win over Anton Shibalov teammates Dimitry Sotnikov, Anton Shibalov and Eduard Nikolaev in a crushing Thursday 1-2-3-4.

With 374km left to fight following 7000km of racing over twelve days, will Dakar’s tail sting again before the Friday’s Qiddia finish? By all means, the leaders have been pacing themselves, but did both car and bike leaders Sainz and Brabec lose more of their advantages than they would have preferred on Thursday?

There also remain a few mighty battles to settle, not least the five seconds between Al Attiyah and Peterhansel in the cars and a mighty close spat for third among the bikes where Honda finally appears on the verge of breaking that KTM stranglehold and what of the Southern African guys and girls doing us all so proud. Resolve itself, Dakar will as always - tomorrow is another day — let’s see what it brings!

Image: Al Attiyah is right in the game