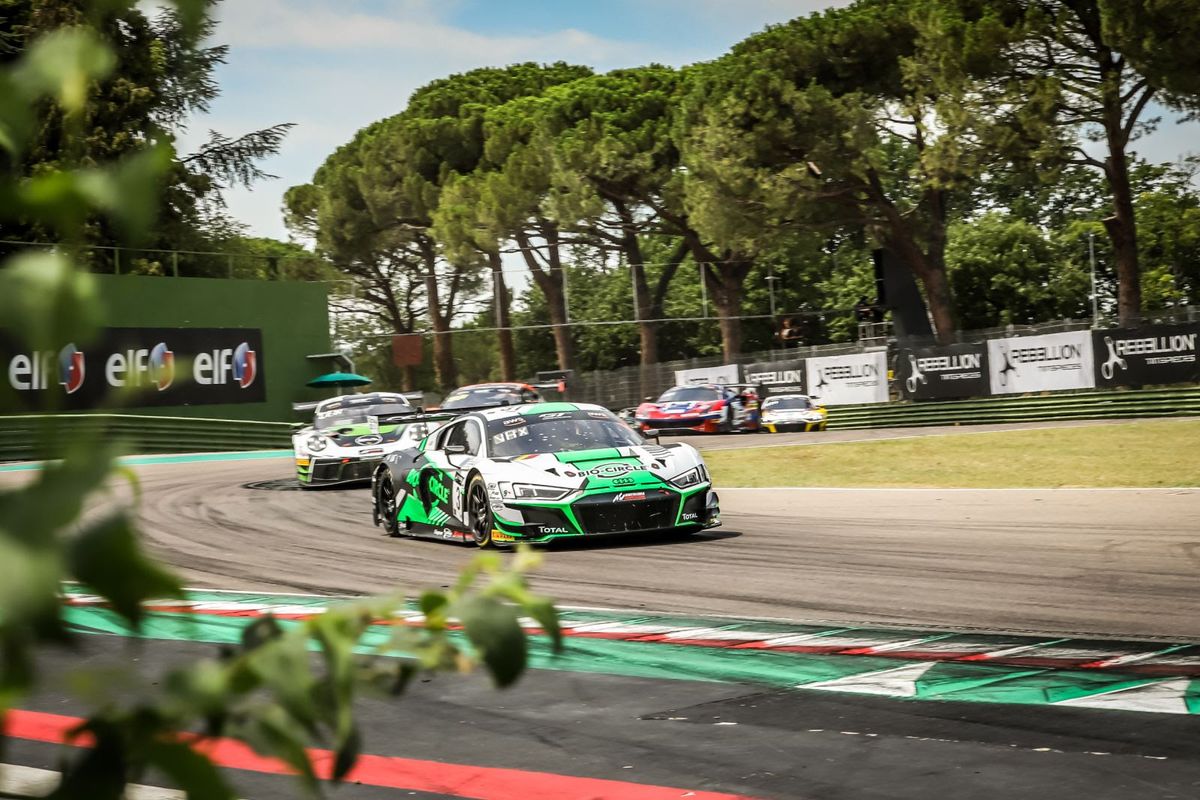 The #31 Audi R8 LMS crew of Mirko Bortolotti, Kelvin van der Linde and Matthieu Vaxiviere executed a perfect race at the historic Italian venue, which came to life once again as a field of 46 GT3 cars tackled a thrilling three-hour contest.

Each driver played a role in the team's success. Vaxiviere took the start and ran fifth throughout the opening stages, which were led by the #66 Attempto Racing Audi of Frederic Vervisch. The pole-sitter maintained his advantage into the opening corner and showed good pace, pulling away from James Calado in the #51 AF Corse Ferrari. Raffaele Marciello slotted into third in his #88 AKKA ASP Mercedes-AMG, then snatched second with an inch-perfect pass on the Ferrari driver.

The first stint saw a handful of full-course yellow periods, and it was during the last of these that the pit window opened. A slow stop scuppered the Attempto car's chances of victory, while a pair of Ferrari runners vaulted to the front with two debutants at the wheel. Nicklas Nielsen took over the #51 AF Corse car that emerged in the lead, followed by Sergey Sirotkin in the #72 SMP Racing machine.

Van der Linde exited the pits in fifth spot, but the South African was in no mood to hang around. What followed was an overtaking masterclass, with moves on Louis Deletraz (#40 GPX Racing Porsche) and Timur Boguslavskiy (#88 AKKA ASP Mercedes-AMG) coming in quick succession. The two Ferraris were now in his sights and Van der Linde wasted no time in dispatching Sirotkin and then Nielsen to assume the lead.

Aided by a long stretch of green flag running, the WRT driver had built a lead of almost 20 seconds by the conclusion of his stint. Meanwhile, the #51 Ferrari received a drive-through penalty for speeding during a full-course yellow period, dropping it down the order. The Italian marque’s hopes were further dented when the #72 SMP Racing car endured a long delay in the pits. This left Davide Rigon outside the top 20, scuppering the Russian outfit’s chances of victory.

Bortolotti took the wheel of the #31 Audi and emerged with an advantage in excess of 25 seconds, but his job was by no means simple. A pair safety car periods bunched the field up, but the Italian judged each restart to perfection. After the second he eased away from his competitors, taking WRT and Audi's first win in more than two years by a margin of 3.4 seconds.

Behind him, a fantastic battle for the podium ensured a grandstand finish, with Mathieu Jaminet (#12 GPX Racing Porsche) coming under heavy pressure from the #88 AKKA ASP machine of Felipe Fraga. The Brazilian had problems of his own, however, as Dries Vanthoor (#32 Belgian Audi Club Team WRT) closed on to the rear of the #88 Mercedes-AMG to make it a three-way scrap for second.

This was to Jaminet's benefit, as Fraga had to defend from a typically determined Vanthoor during the closing laps. The Porsche ace crossed the line to take second spot, completing a polished performance from the #12 crew, while the #88 Mercedes-AMG captured the final place on the podium ahead of the #32 WRT Audi.

Fifth went to the #25 Sainteloc Racing Audi, followed by the #99 ROWE Porsche and the recovering #51 AF Corse Ferrari. Next came the #69 Optimum Motorsport McLaren, which took a strong eighth on its series debut thanks to Rob Bell, Joe Osborne and Ollie Wilkinson. The #40 GPX Porsche and the #163 Emil Frey Racing Lamborghini completed the overall top-10.

The Silver Cup class was won by the #78 Barwell Motorsport Lamborghini, driven by Patrick Kujala, Alex MacDowall and Frederik Schandorff, which emerged as a serious contender during the second half of the race and assumed the lead following a collision between class rivals Garage 59 (#159 Aston Martin) and Tech 1 Racing (#15 Lexus). The Aston took runner up spot, beating the Lexus after a close-fought battle that ran for much of the three-hour contest.

Though they missed the Silver victory, Garage 59 were clear winners in Pro-Am as the #188 Aston Martin finished an excellent 14th overall. Indeed, the British squad was nine places clear of its nearest rival at the finish thanks to an excellent showing from the crew of Alexander West, Chris Goodwin and Jonny Adam. Runner-up went to the #93 Sky Tempesta Racing Ferrari, which was less than a second clear of the #26 Sainteloc Audi. The #108 CMR Bentley of Bernard Delhez, Romano Ricci and Stephane Tribaudini ran in the Am Cup class and took the chequered flag in 31st place overall.

Following the opening Endurance Cup round, GT World Challenge Europe Powered by AWS will remain in Italy for its next event, which will see the Sprint Cup kick off with a trio of one-hour races at Misano (7-9 August). The Endurance Cup will resume with a six-hour contest at the Nurburgring on 5/6 September.

Sunday's race launched the 10th season of competition for the Endurance Cup and hinted at another action-packed campaign for the long-distance championship. Indeed, with racing back underway once more, the battle has truly begun.

Mirko Bortolotti, Belgian Audi Club Team WRT (#31 Audi R8 LMS): "Honestly, I have no words. This is a fantastic result, debuting with Audi and in my first race together with Belgian Audi Club Team WRT. I would like to thank my teammates for the amazing job they’ve done and our team for its hard work and the strategy it put in place. This was a perfect day, winning the first race of the championship at home."