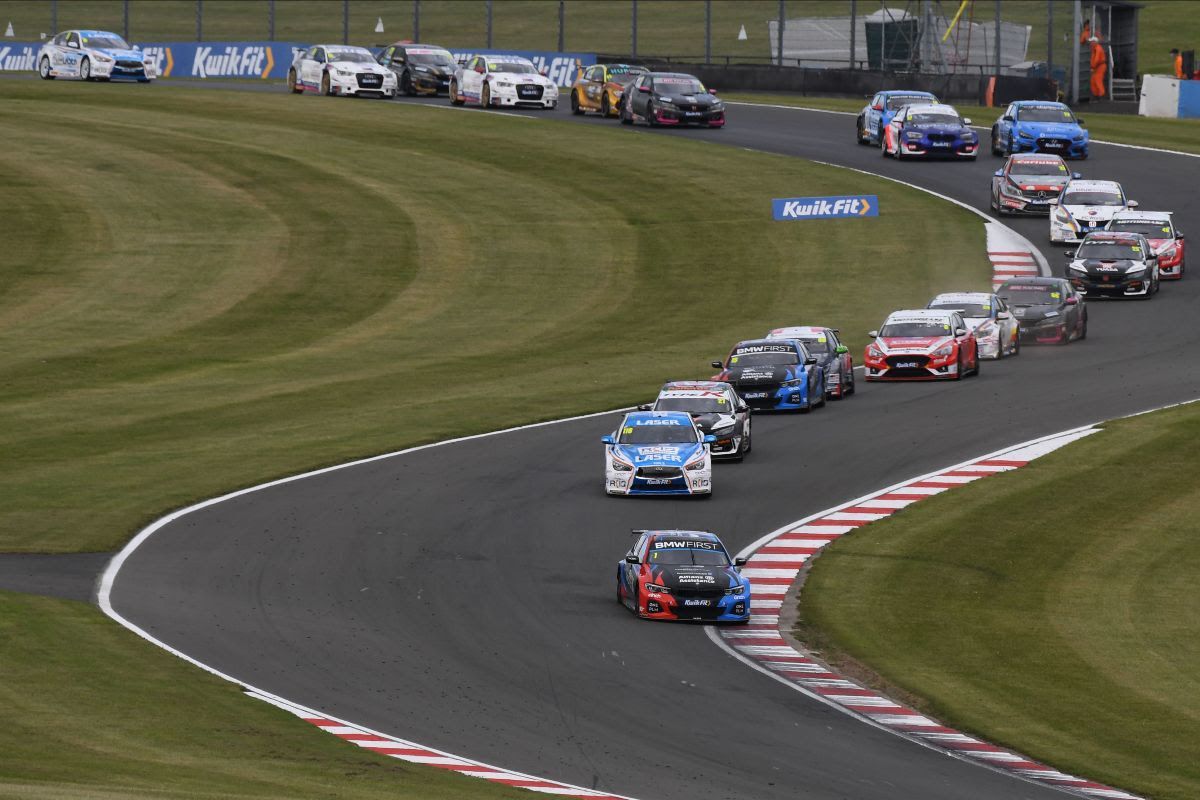 As BTCC blasts back into action at Donington Park

The 2020 Kwik Fit British Touring Car Championship got off to a dramatic start this weekend (1/2 August) with Dan Cammish, Colin Turkington and Ash Sutton scoring a win apiece at Donington Park.

The top three qualifiers from Saturday all stood on the top step of the podium during the course of Sunday’s action, which commenced some 294 days after the 2019 season finale.

Halfords Yuasa Racing’s Cammish claimed victory in the season opener after he got the better of Turkington and Sutton in a ding-dong battle for the lead.

The critical moment of the contest came on lap four as Sutton got the switchback on Team BMW’s Turkington on the exit of the Old Hairpin. The pair touched on the run up to McLeans and Cammish incredibly squeezed by both of them, whilst slight contact from Tom Ingram’s Toyota tapped Turkington’s BMW into Sutton.

When the dust eventually settled Sutton’s car was left stranded on the grass, with Cammish now leading from Turkington and Motorbase Performance’s Rory Butcher.

That’s how the leading trio remained until the finish but there was plenty of action behind for the other points paying positions.

Turkington cruised to victory in the second contest as the reigning champion showed his composure and class around the 1.98-mile National Circuit.

The Team BMW star got the jump on pole-sitter Cammish on the run down to Redgate for the first time as the latter struggled slightly with his ballast-laden Honda Civic Type R.

The 38-year-old scampered away into the distance – even calmly controlling a mid-race safety car spell – whilst the remaining podium position switched several times.

Cammish failed to keep Butcher, Ingram and Oliphant behind him with the trio setting up their own scrap for second and third.

Oliphant was shuffled back again initially but the BMW man would fight back to eventually pass Ingram’s Toyota Corolla to grab third at the finish, whilst Butcher claimed second.

The star of the second bout was arguably Sutton as the 2017 champion stormed from 14th on the grid – following his race one clash – to take a fantastic fifth place.

Sutton made several eye-catching passes with his final two moves past the manufacturer Hondas of Cammish and Matt Neal being particularly impressive.

If there was any doubt as to Sutton's star status, there was little argument following the grand finale, as he sped to victory from eighth on the grid.

The 26-year-old was in the thick of the action throughout the weekend with a stellar qualifying performance, fastest race laps and fight back drives, culminating in a magnificent win in the finale.

From eighth on the grid, Sutton scythed his way through to fourth in the early running and was then part of an enthralling four-way battle for the lead, which also included Ollie Jackson, Chris Smiley and Josh Cook.

The Motorbase Performance Ford of Jackson led the opening laps but was eventually passed by the impressive Smiley in the all-new Excelr8 Motorsport Hyundai. That moment brought about a domino effect as Sutton soon jumped two spots and into second, with Cook’s BTC Racing Honda tucked in behind.

It was a matter of when, not if, and shortly after mid-distance young charger Sutton blasted by Smiley along the Dunlop Straight.

Sutton sailed away with the win in the closing laps, whilst Smiley crossed the finish line just 0.276s ahead of Cook. Sutton’s victory was the first for the Infiniti Q50 and Smiley’s podium was the first podium for the striking Hyundai i30N.

Incredibly for Sutton, he also set the fastest lap in each of the three races, the first time such a feat has been achieved in the BTCC since Gordon Shedden did so at Thruxton back in 2012.

It was a wonderful way to end an incredible day of racing as the BTCC made its long-awaited return to action.

Turkington holds a slender advantage in the early Drivers’ standings from Cammish, Sutton and Butcher, whilst Team BMW also top the Teams’ standings.

Honda and BMW can’t be separated in the Manufacturers’ order – both having scored 89 points on the opening weekend.

Turkington tops the Goodyear Wingfoot Award by virtue of his pole position on Saturday.

Dan Cammish, Halfords Yuasa Racing, said: "Race one was brilliant, to start on a high with a win – I always knew Ash would be aggressive with Colin and when he opened up the gap I think he forgot about me, and I took the opportunity. I’m second in the points with almost 40 more than I started with last year. It will be tough going back to Brands, I’ll have a lump in my throat the first time I go through the corner where my title ambitions went last season, but I like the track and the car goes well there – it will be head down and get some more points in the bag."

Colin Turkington, Team BMW, said: “It feels great to stand on the top step. After all our preparation, to get a win feels fantastic and a great result for the team. My race was made off the line; I knew the job had to be done before turn one. Once I was in front my car had electric pace, it felt even stronger with a little weight in it, which settled things down. I’m really happy to get my first win of the season and a big clap on the back for my team.”

Ash Sutton, Laser Tools Racing, said: “This is just what we needed. The car gives me a hell of a lot of confidence and it’s allowing me to do these things. I’m over the moon with that. As long as we can keep this momentum going, I know I’ve got the best team behind me with Laser Tools Racing and BMR Engineering. I couldn’t ask for a better outfit. The car is absolutely phenomenal. I feel at home in it, it’s the best I’ve ever felt in a car so we’re ticking a lot of boxes here.”

Race 2:
Aiden Moffat received a ten second penalty for lining up in the wrong grid position

Race 3:
Ollie Brown received an official reprimand and had his licence endorsed by the addition of two penalty points for an incident involving Jack Butel