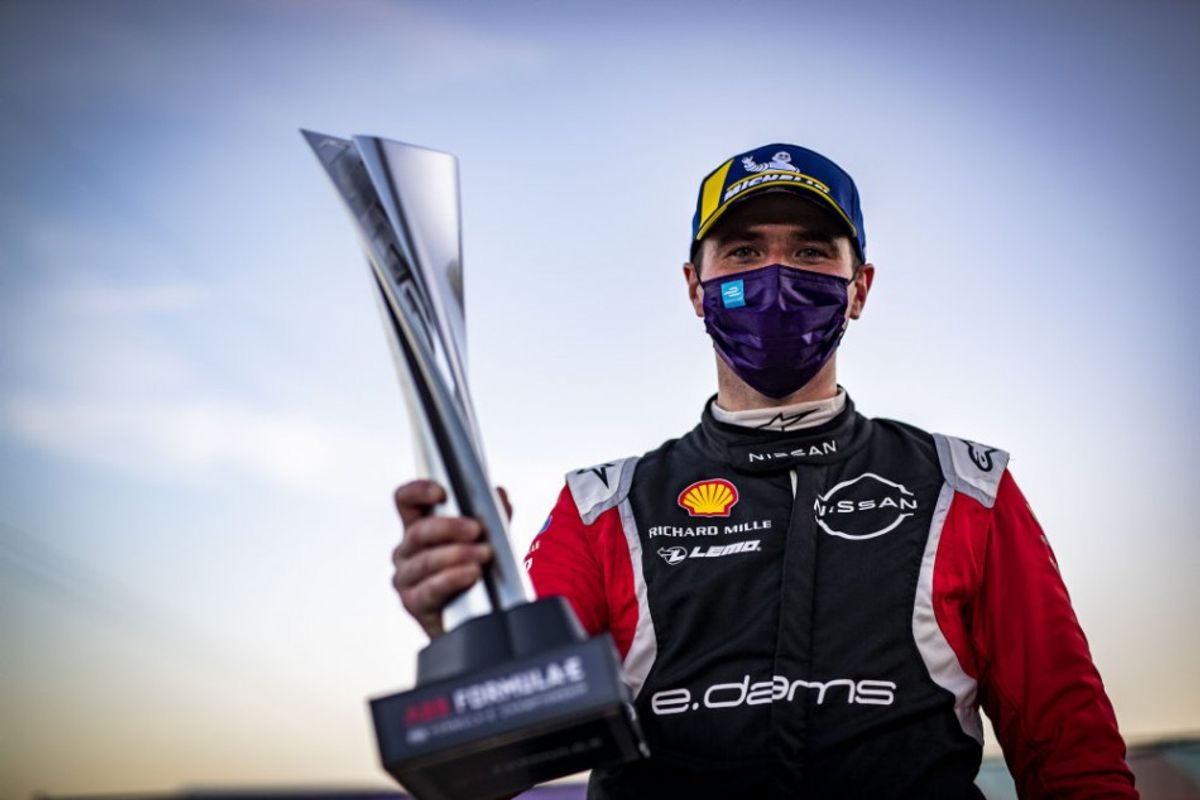 Oliver Rowland produced a peerless performance to convert pole position into victory in the penultimate Berlin E-Prix (12 August), leading home Robin Frijns and René Rast in what turned out to be a race to forget for some of the ABB FIA Formula E Championship’s biggest names.

From his third career pole position, Rowland led the 24-strong field away when the lights went out, and by lap ten, he had established a two-second margin over nearest pursuer Frijns.

Not putting so much as a wheel out-of-place, the Nissan e.DAMS star maintained that margin throughout, never once surrendering his lead – although Frijns got close when Rowland employed ‘ATTACK MODE’ for the first time. Taking the chequered flag just over 1.9 seconds ahead, his maiden win vaulted the Briton from ninth up to second in the title table with one race remaining.

Frijns extended his run of good results at Tempelhof Airport, adding another runner-up finish to the second and fourth places he achieved for Envision Virgin Racing last week, with the result helping to make up for a failure to start Sunday’s race due to a powertrain issue.

Behind the top two, all eyes were on the tussle for third. Following an excellent qualifying effort, Neel Jani held the position for much of the race but subsequently conceded ground to TAG Heuer Porsche team-mate André Lotterer and Audi Sport ABT Schaeffler’s Rast, who proceeded to engage in an enthralling battle for the final spot on the podium.

Lotterer – one of the race’s main movers early on as he scythed his way past Rast and Alex Lynn – looked to have the situation under control in his defence against his countryman, but with less energy remaining, he found himself under increasing attack in the closing stages. In an incredible duel, the pair went side-by-side through several corners on the last lap, as Rast boldly prised the door open and eventually made a pass stick.

Lynn took fifth for Mahindra Racing, the Briton sagely conserving his energy in order to pull off a late overtake on Jani, who nonetheless scored his first Formula E points in sixth after what was by far his most competitive performance to-date.

From 14th on the grid, Mitch Evans (Panasonic Jaguar Racing) climbed through the field well. Despite losing ground when he was baulked on lap two, thereafter he picked his rivals off and made full use of ‘FANBOOST’ to cross the finish line in seventh and remain in the mix for the championship runner-up laurels.

Edoardo Mortara claimed his second points finish of the week in Berlin with eighth place for ROKiT Venturi Racing, ahead of Mercedes-Benz EQ’s Stoffel Vandoorne, who raced up the order from 18th at the start.

The points-paying positions were completed by Rowland’s Nissan e.DAMS stablemate Sébastien Buemi, who enjoyed an entertaining duel with recently-crowned champion António Félix da Costa (DS Techeetah). The pair had started at the rear of the field following a disastrous qualifying session for all four Formula E title-winners, but fought their way through to the fringes of the top ten. Da Costa was on-course to finish 11th until he dropped out of contention on the last lap.

Fellow champions Lucas Di Grassi (Audi Sport ABT Schaeffler) and Jean-Éric Vergne (DS Techeetah) were similarly in the wars; the Brazilian picked up a puncture and a five-second penalty for a collision with da Costa, while the Frenchman was handed a drive-through penalty for battery over-cooling.

BMW i Andretti Motorsport’s Maximilian Günther – third in the standings heading into the race – had to pit for repairs after contact early on left him with a punctured tyre, but he remains one of nine drivers still in the hunt for the championship runner-up spoils, a battle that will be decided tomorrow (Thursday, 13 August) in the season finale.

"I didn't expect that today. The team has done a fantastic job, qualifying went well and in the race the car was amazing. I can't believe it, it is an amazing feeling so let's work for more of these moments."

"I was struggling to hang on to Oliver at the beginning since he was very fast - he just pulled the gap since he was one lap longer in ATTACK MODE. I was trying to get back, but Oliver did a great job and he was much quicker than me. I’m quite happy with second place but we are here to win so we need to keep working towards that goal."

"The team told me I had more energy left than Andre on the last lap and I saw he was struggling in sector two. He was lifting quite early so I tried to overtake him and we had some contact and then went side-by-side in T12 and T13 and there was a bit of rubbing. If I have learned something over the past few races, it is that rubbing equals racing in Formula E, so I tried it today and had a much better result!"