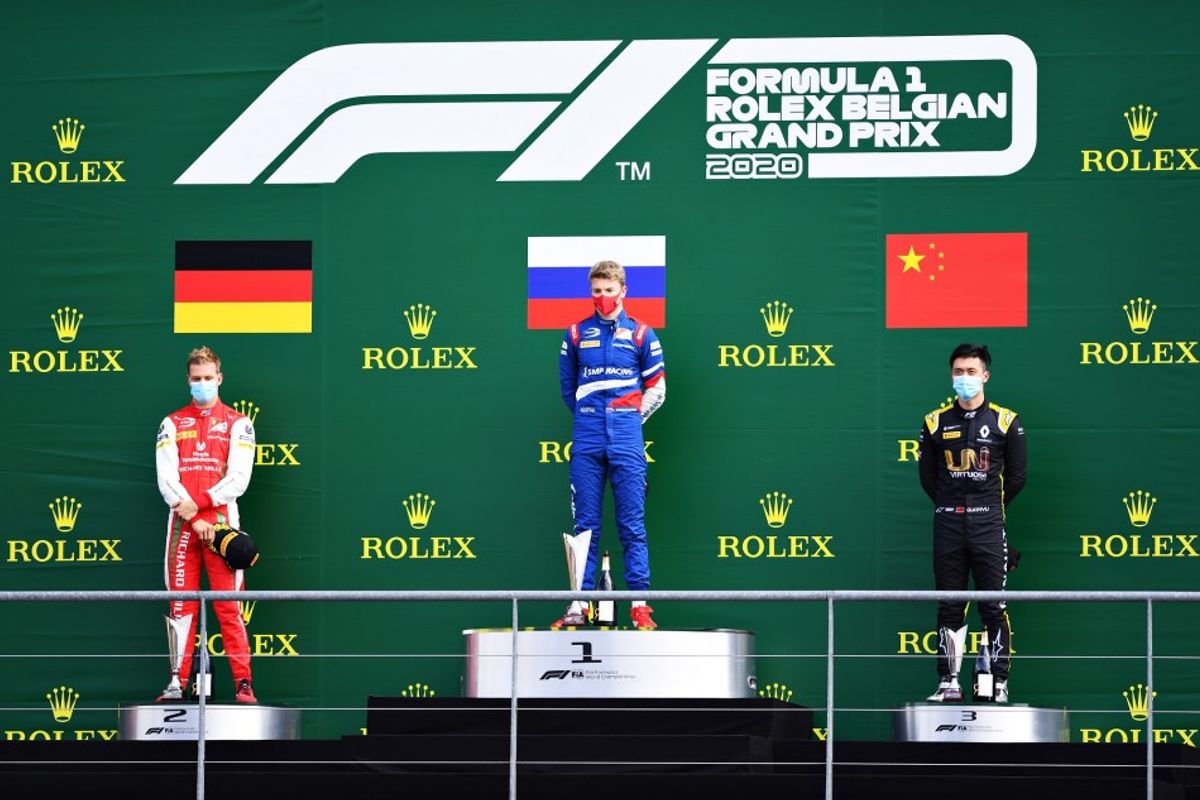 Robert Shwartzman returned to the top of the FIA Formula 2 Championship with his third victory of the season in the Sprint Race at Spa-Francorchamps, finishing nine seconds ahead of his teammate Mick Schumacher in a PREMA one-two.

Callum Ilott began the day in first place in the standings, but suffered an early retirement in the very first lap after a coming together with Yuki Tsunoda.

With Ilott out of contention, Shwartzman knew that the Championship lead was on offer, but needed to keep the risk low and the points high. The Russian made the most of an early collision between race leaders Roy Nissany and Dan Ticktum to fire into first, and closed out a controlled victory from there.

Ticktum battled on determinedly after the collision, but couldn’t hold on to a points’ finish, eventually falling back to ninth at the flag, while Nissany’s day ended in retirement.

Ilott’s teammate Guanyu Zhou had a much better time of things, taking his fifth podium of the year behind the PREMAs in third.

This was as good as it got for the Charouz Racing System driver, who then started to drop down the order, opening up an intense battle for the final podium spot. Guanyu Zhou was the first to stake his claim, but Schumacher’s own attempt was far more convincing, as he wrestled ahead of the UNI-Virtuosi man for third.

Shwartzman had scuttled off down the road by this point, building up a 7s lead over Ticktum, who was busy watching those behind him in his rear-view mirrors.

The DAMS’ driver looked to be standing his ground, but locked up under the pressure of Schumacher’s challenge and opened himself up to a move. The PREMA racer remained patient and eventually got ahead down the Kemmel Straight. Zhou followed through one lap later, taking the final podium spot.

The top three eased to the chequered flag, with Nikita Mazepin taking fourth and Luca Ghiotto fifth, followed by Delétraz and Christian Lundgaard. Artem Markelov scored his first points of 2020 in P8, while Ticktum fell back in the closing laps and ended the day in ninth, out of the points.

Shwartzman now leads Ilott in the Drivers’ Championship by exactly 10 points, with 132 in total. Tsunoda remains third on 111, with Schumacher fourth and Mazepin fifth. In the Teams’ Championship, PREMA sit first with 238 points, ahead of UNI-Virtuosi on 214 and Hitech Grand Prix on 152. Carlin are fourth ahead of ART Grand Prix.

“I have finally gotten back to first place - it had been a while since Hungary. I am really happy, and I want to say a big thank you to the team. They did a really great job and the car has been good all weekend. Yesterday, I made a mistake which influenced our result a bit.

“Today, I had a decent start and was P3 out of Turn 1. The guys in front were quite aggressive so I was being a bit cautious with them. They crashed and collided, and I used that opportunity to get past them.

“After that, I just kept up my pace and I am really happy to have the win and the fastest lap as well.”