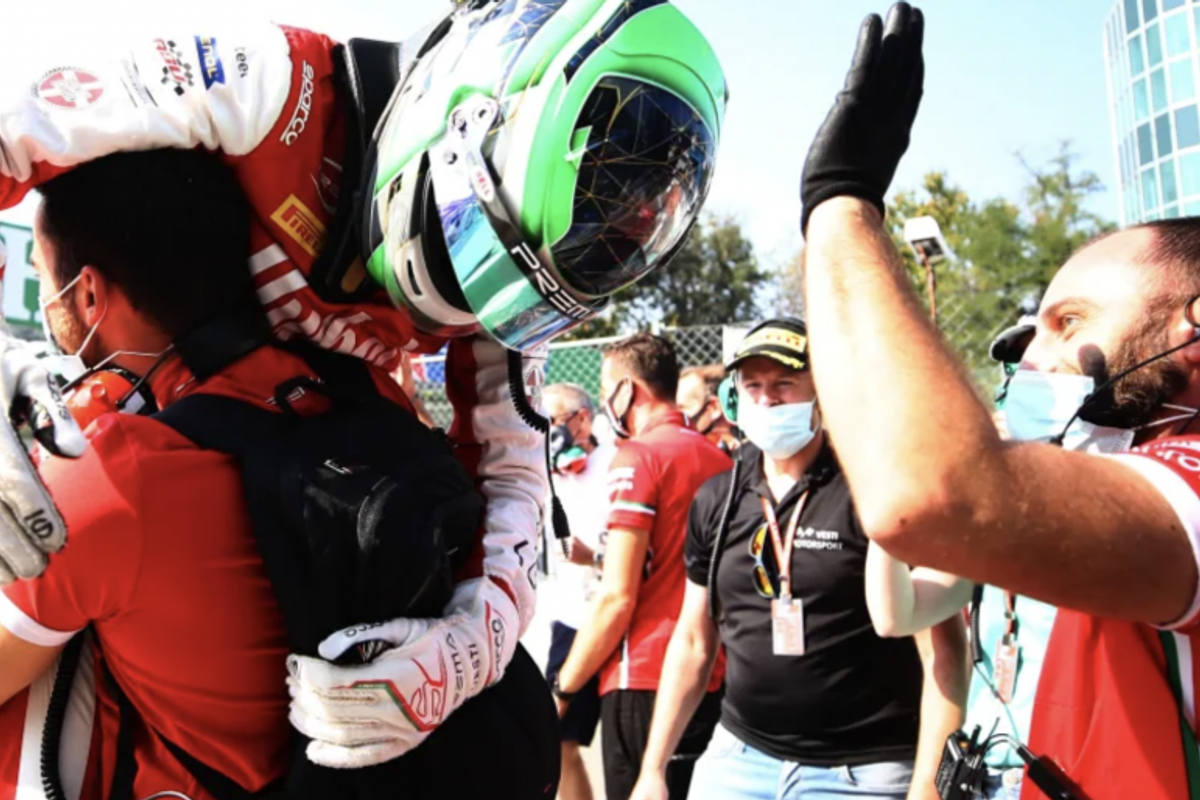 Frederik Vesti drove a phenomenal race from ninth on the grid to seal his second FIA Formula 3 win of the season and emphatically clinch the Teams’ Championship for PREMA Racing on home soil with a round to spare.

The Dane left it late at Monza, having carefully picked off those starting in-front of him, to dispatch of Théo Pourchaire with two laps to go and cap off arguably his best performance in F3.

Pourchaire settled for second at the chequered flag, but drove a sublime race of his own, putting a difficult Friday behind him to rise from sixth.

Vesti’s PREMA teammate Oscar Piastri made up the most places of the top three, stealing a podium place late on having started all the way back in P15. In doing so, the Australian regained the Championship lead from teammate Logan Sargeant. The American suffered a disastrous race, finishing 26th after contact from Clément Novalak spun him off track.

Despite an initially strong getaway, pole-sitter Liam Lawson fell down the order, before contact with fellow front row starter Matteo Nannini rid him of any momentum he had left, eventually finishing in P6.

A manic Qualifying session, which saw no fewer than nine drivers handed post-session penalties, was followed up by a manic start to the race. Lawson surged off the line in controlled fashion, but there was all sorts of action behind him.

Jake Hughes flung off the line and was initially looking down the left of the Hitech Grand Prix driver, but locked up and fell back to fourth. From second, Nannini looked right, and then left, but couldn’t see any way past Lawson. The Italian tried his luck again around the second turn, but again just couldn’t find the room.

Pourchaire - who had initially taken pole on Friday before being handed a five-place grid drop – enjoyed a sterling start, firing his ART machine off the line and into third at the end of the first chicane.

It didn’t take the Frenchman long to nip ahead of Nannini either, who had lost momentum in his attempts to overtake Lawson. In amongst all of this, Sebastián Fernández spun at the first turn and fell to the back of the grid.

Three laps in and Pourchaire was challenging Lawson for the lead. The Frenchman was on the warpath and had already set the fastest lap in his bid to bridge the gap. He lined up behind the Hitech on the main straight, using DRS to pass the Kiwi for the lead at Turn 1.

Just behind them, Hughes had managed to tussle ahead of Nannini into third, and then dispatched of Lawson a lap later for P2.

Sargeant misjudged the first corner and was forced to funnel through the run-off area, coming out directly in-front of PREMA teammate, and main title rival, Piastri, in 12th. The two managed to fight intothe top ten, and thrice swapped places – with Piastri coming out on top.

Nannini’s chances of a podium disappeared as a battle for third place with Lawson ended in collision. The Italian attempted to take the inside line going into Turn 1, but the space wasn’t there and the two touched front-wings. Nannini suffered damage and was forced to pull over and retire.

The Kiwi had lost precious time and now had Vesti following in his wheel tracks. The PREMA made a move around the second chicane and both men were briefly forced off track – Vesti at the turn and the Kiwi down the straight - with Lawson just about clinging on to the final podium spot.

The action was brought to a halt by a Safety Car as Fernández dumped his ART in the gravel trap. Pourchaire kept an eye on Hughes at the restart, but the Briton was too busy defending an attack from Vesti to bother the race leader. The Dane had already fired ahead of Lawson and successfully slipped ahead of Hughes as well.

The Championship battle was blown wide open as Sargeant was tagged by Novalak and spun off track. The American managed to get going again, but had plummeted to last, with his main rival Piastri up to sixth.

PREMA enjoyed a sterling Lap 20, as Vesti finally made a move on Pourchaire for the lead. The Dane held his nerve at the first chicane and braked later than the Frenchman, gathering it together at the exit to steal first place.

Behind them, Piastri had already nicked fifth from Beckmann and then fourth from Lawson, and now had Hughes in his sights as well. It took the Australian another lap, but he managed to edge ahead of the Briton.

Vesti coolly held on at the chequered flag ahead of Pourchaire and Piastri. Beckmann fought up to fourth at the end to push Hughes down to P5, while Lawson fell to sixth. Lirim Zendeli, Bent Viscaal, Enzo Fittipaldi and Michael Belov completed the top ten.

Piastri now leads the fight for the Drivers title by eight points, on 160, ahead of Sargeant who has 152. Pourchaire is up to third on 124 points, ahead of Beckmann and Lawson. PREMA have clinched the Teams’ Championship with a mega tally of 429.5 points, ahead of Trident on 217.5 and ART Grand Prix. Hitech are fourth, ahead of MP Motorsport.

“I would like to thank PREMA for a great car and for the great progress we have made.”

On just his fourth F3 start, Belov will line up at the front of the grid for Charouz Racing System on reverse grid pole in Race 2 tomorrow, at 9.45am (local time).