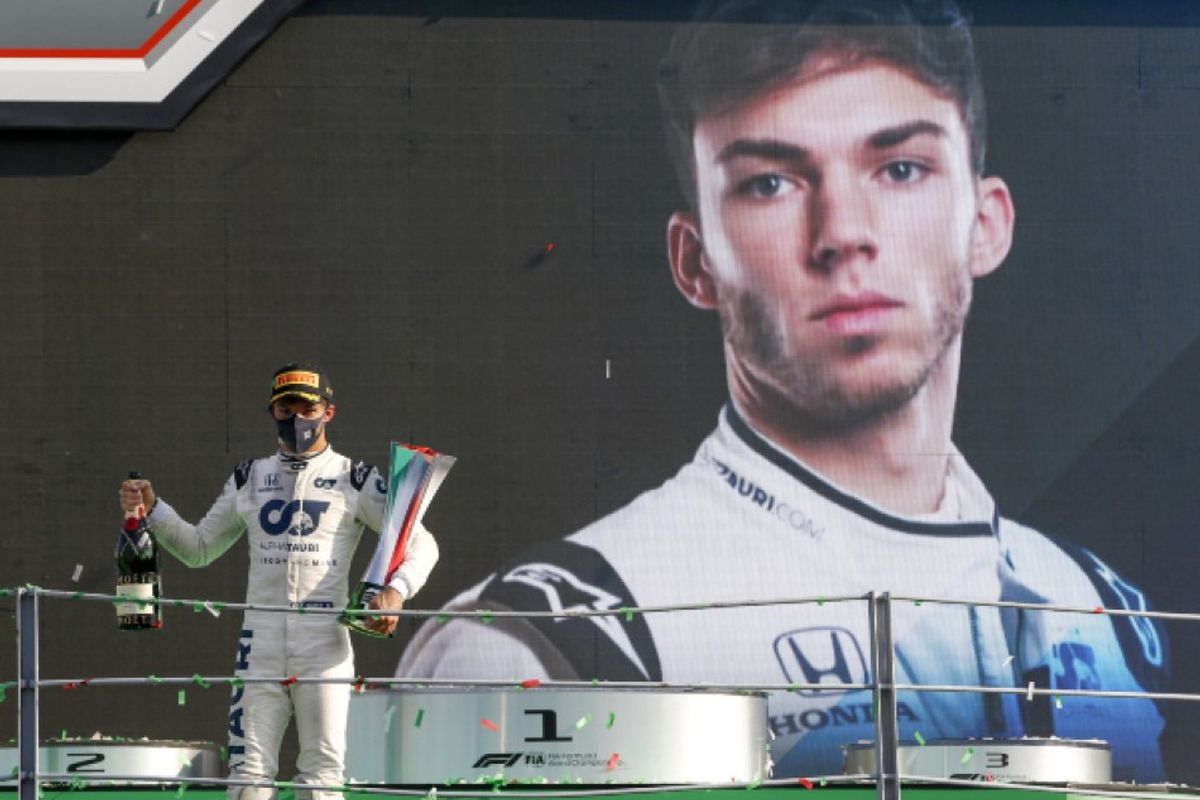 AS HAMILTON IS PENALISED

Pierre Gasly scored his first Formula 1 victory and the first for the AlphaTauri team at the end of an enthralling, incident-packed Italian Grand Prix that saw Carlos Sainz and Lance Stroll take second and third respectively and during which championship leader lost the lead of the race through a stop and go penalty.

At the race start, pole sitter Hamilton made a good getaway to take the lead but team-mate Valtteri Bottas, starting from P2, made a slow start which allowed Sainz to steal second on the run to Turn 1. The Spaniard’s team-mate Lando Norris then pounced in Turn 1 and Bottas dropped back to an eventual fifth as Sergio Pérez also powered past. Further back, Red Bull’s Max Verstappen also lost ground at the start. The Dutchman got away slowly when the lights went out and he dropped from fifth to seventh.

As the opening stint got into its stride, Hamilton began to march away from the pack and by lap 10 he was six seconds clear of Sainz who was a further 3.5s clear of Norris.

However, on lap 17 Haas’ Kevin Magnussen lost power and pulled over at the side of the track near the pit entry. The Safety Car was deployed and Hamilton dived into the pit lane to take on a set of medium tyres. However, prior to the race leader’s move the pit lane had already been closed to provide for safe removal of the Haas car and Hamilton’s entry to the close pit lane was placed under investigation.

Once Magnussen’s car had been recovered the pit lane was reopened and the entire field streamed into the pit lane for new tyres just ahead of a swift resumption of action.

However, within moments of the restart, the race was neutralised again. Charles Leclerc lost control at high speed at the exit of Parabolica and hit the barriers hard. With the tyre wall substantially deformed and requiring repair the race was red flagged.

After an almost -30-minute delay the field reformed on the grid for a standing start. Hamilton, now facing a 10-second stop-and-go penalty, lined up on pole ahead of Stroll, Gasly, the Alfa Romeo cars of Kimi Räikkönen, Antonio Giovinazzi and McLaren’s Sainz. Norris lined up seventh ahead of Bottas, Williams’ Nicholas Latifi and Renault’s Daniel Ricciardo.

Hamilton held the lead on the restart as Gasly stormed past Stroll to take P2. At the end of the lap Hamilton dived into the pit lane to take his penalty and Gasly assumed the lead of the race. Further back Verstappen steered his RB16 to the pit lane and retired from the race with a PU issue.

Sainz slowly beginning to reel in Gasly, with the Spaniard edging closer to the leader by two tenths of a second per lap. With two laps remaining he was edging into DRS range of the AlphaTauri and on the final lap Sainz took his chance.

He made a late lunge into Turn 1 but Gasly rebuffed the move and with better traction out of the corner and out of the second chicane he was able to draw away from the McLaren but just enough to take his first career win, with 0.4s in hand over the Spaniard. As well as taking the first win for the AlphaTauri name, Gasly become just the second driver to win for the Faenza-based team after Sebastian Vettel won the Italian Grand Prix for Toro Rosso in 2008.

Lance Stroll completed an unlikely podium, with Norris fourth. Bottas finished in fifth place ahead of Ricciardo and Hamilton clawed his way through to seventh place. Eighth place went to Esteban Ocon and the final two points positions were taken by Daniil Kvyat in the second AlphaTauri and Racing Point’s Sergio Pérez.