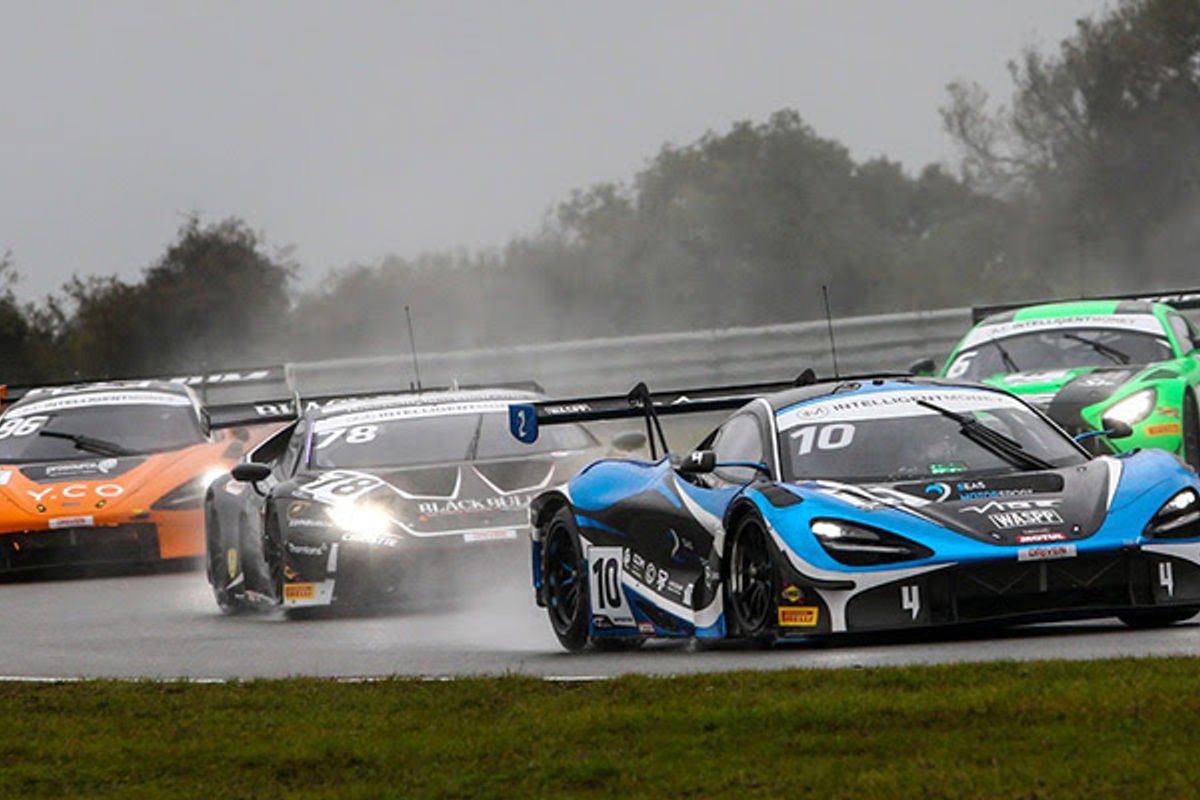 2 Seas Motorsport’s Jack Mitchell, and Jordan became the seventh different winners in as many Intelligent Money British GT3 races this season at soggy Snetterton this morning, while TF Sport’s Jamie Caroline and Dan Vaughan now lead the GT4 championship on their own after scoring a first class win of the year.

A race that began behind the Safety Car also witnessed a remarkable stint from Sandy Mitchell who took second from Optimum’s McLaren – shared by Ollie Wilkinson and Lewis Proctor – on the line. Barwell’s #78 Lamborghini, which Mitchell shares with Rob Collard, is now just one point behind RAM Racing’s championship leaders Sam De Haan and Patrick Kujala who finished fifth.

Soaking conditions proved no obstacle for the McLaren driver who dispatched front row starter Rob Collard and pole-man Sam De Haan on consecutive laps soon after the Safety Car was withdrawn. He then established a solid three-second lead over Optimum’s Lewis Proctor who took second when RAM’s Mercedes-AMG lost momentum while attempting to fight back against Witt.

The cars emerged from their pitstops a similar distance apart, but Jack Mitchell was able to steadily pull clear of Ollie Wilkinson en route to a 7.8s victory.

Optimum’s McLaren looked set for its best result since Oulton Park until an inspired Sandy Mitchell began tearing into Wilkinson’s advantage, which stood at 20s immediately after the pitstops. Barwell’s Lamborghini, spurred on by the chance to make up more ground in the championship, was right behind at the start of the final lap and out-sprinted the McLaren to take the chequered flag just 0.081s ahead.

Behind, De Haan handed his Mercedes-AMG over to Patrick Kujala in third place but immediately lost out to their primary championship rivals as a result of a 10s Success Penalty for winning at Donington. Instead, Kujala emerged just ahead of Yelmer Buurman who quickly found a way past his Silver-ballasted team-mate despite a lairy moment that almost cost both drivers dear.

While Buurman romped clear to claim the Pro/Am spoils with co-driver Ian Loggie, Kujala was left to defend from the rapidly advancing Andrea Caldarelli, who’d taken over from Michael Igoe. RAM’s Mercedes-AMG and WPI’s Lamborghini remained nose-to-tail – and frequently closer – thereafter as the Italian repeatedly looked for a way past. But Kujala resisted to maintain his and De Haan’s place at the top of the championship, albeit by just one point.

Barwell’s second Huracan faced an uphill battle after Adam Balon’s spin left Phil Keen at the tail of GT3. But last year’s double Snetterton winners fought back to finish seventh and limit the damage done to their title hopes.

TF Sport pairing Dan Vaughan and Jamie Caroline became the sixth different GT4 winners of the season after emerging on top during a tricky first outing at Snetterton, and in doing so earned themselves a slender championship lead.

With the GT4 title fight finely poised heading to Norfolk, any big score or slip-up could have dramatically changed the picture ahead of the season finale at Silverstone next month. But Vaughan and Caroline picked their way through treacherous conditions in Race 1 to move 9.5 points clear despite the best efforts of HHC Motorsport’s McLaren crew of Jordan Collard and Patrik Matthiesen.

After their Donington win, Collard/Matthiesen knew they had to serve an additional 10s during their pitstop. Collard duly secured pole for the car, in the hope of being able to pull away and overturn much of the deficit. However, the great British weather didn’t aid his cause, with the race having to start behind the Safety Car on a drenched circuit.

Unable to make progress for the opening 10 minutes, Collard pushed as hard as the conditions would allow when racing-proper finally got underway. But while he did manage to forge a near four-second gap over the sister HHC McLaren in the hands of Gus Bowers by the time the pit window opened, it wouldn’t be enough to keep the #58 570S out front.

Vaughan had started the TF Aston third and kept a watching brief on the twin HHC McLarens ahead during what was a relatively static opening half. TF then called both its cars in for their stops at the first opportunity in the hope of undercutting the McLarens.

Collard and Bowers were the final two cars to pit and, when the order worked out after the stops and Success Penalties, Caroline emerged at the head of the pack after taking over from Vaughan, with Matthiesen re-joining in second, just ahead of Chris Wesemael – in for Bowers – and Patrick Kibble, who had taken the second Aston over from Connor O’Brien.

Once ahead, Caroline surged clear to cement the #97’s first win of the season.

Behind, a superb three-car battle for second erupted. As the track began to dry, the Astons came alive, with Kibble piling pressure on Wesemael for third place and eventually passing after the McLaren ran too deep into Agostini.

From there, Kibble hunted down Matthiesen and, with just a minute left, the pair were glued nose-to-tail. But, try as he might, Kibble couldn’t quite make a move.

Wesemael took fourth, despite a few off-track excursions during the latter stages, while Balfe’s Euan Hankey and Mia Flewitt claimed the Pro/Am spoils in fifth overall.

Sam Smelt and James Kell brought the Speedworks Toyota Supra home in sixth, passing the Academy Motorsport Ford Mustang late on after Matt Cowley had an off at Wilson hairpin.